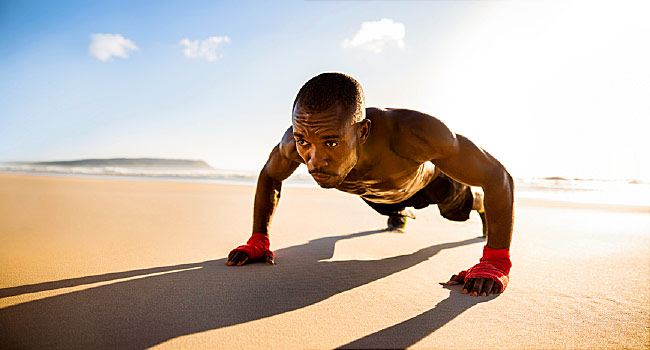 In a 10-year study published in February, researchers reported that men who can do 40 pushups have a whopping 96% lower risk of heart disease than guys who can’t muster 10. The average man in the study: Nearly 40 years old and overweight, but not obese. All 1,562 men were physically active firefighters rather than office workers. The study’s results strengthen the case that muscle-building promotes heart health.

“Resistance training is super important,” says Kaiser Permanente sports medicine specialist Robert E. Sallis, MD, who was not involved in the study. “It seems to have the same benefits as cardiovascular exercise.”

Can’t do 40 pushups? Don’t sweat it. In the study, even men who could do only 11 pushups dropped their risk of heart disease by 64%. The biggest difference, says Sallis, lies between those who do no exercise and those who at least do some: “Even if you can only do a little exercise, you get tremendous benefits.”

The study focused on pushups, but don’t limit yourself to that one exercise. Your workout should include a variety of movements that work as many muscles as you can. Sallis recommends weightlifting, situps, pullups, and interval training. “Your goal shouldn’t be simply to do more pushups in order to live longer,” he says. “It’s about your overall fitness.”

Sallis says that men often become discouraged when their exercise routine does not lead to weight loss: “They think their program’s not working, but that’s wrong.” He says that fitness — or your capacity for exercise — is a much better indicator of your health than weight, at least up to a point.

Read More:  When is anti fungal yet

“All of the data tells us that if you can be active and do those pushups or other exercises, the weight doesn’t matter unless you’re morbidly obese,” says Sallis.

New to exercise? Start slow and ramp up. Sallis recommends daily brisk walks at first, building up to 150 minutes per week, or 30 minutes a day.

“Try 10 minutes a day at first,” he says. “If that’s all you can do, I’ll take it. Even low doses of exercise provide benefits.”

And if you don’t like pushups? That’s OK. Do something else. “I don’t necessarily want people to do more pushups,” says Sallis. “I want them to be more fit. Do whatever you want to do — you’ve got a large menu.”

Questions for Your Doctor

Should I avoid some types of exercise?

Do I need to be evaluated before I exercise?

Most people don’t need a doctor’s permission to start moderate exercise, like a walking program, but if you have heart disease, diabetes, or other chronic health problems, check in with your doctor.

What health red flags should I watch for?

See your doctor if you feel any chest pains while working out or if you have excessive shortness of breath. Knee pain also should not be ignored.

Do my medications mix well with exercise?

Some blood pressure medications affect your heart rate, cause shortness of breath and dizziness, and make you more likely to get dehydrated. Review your prescription drugs with your doctor when starting to exercise.