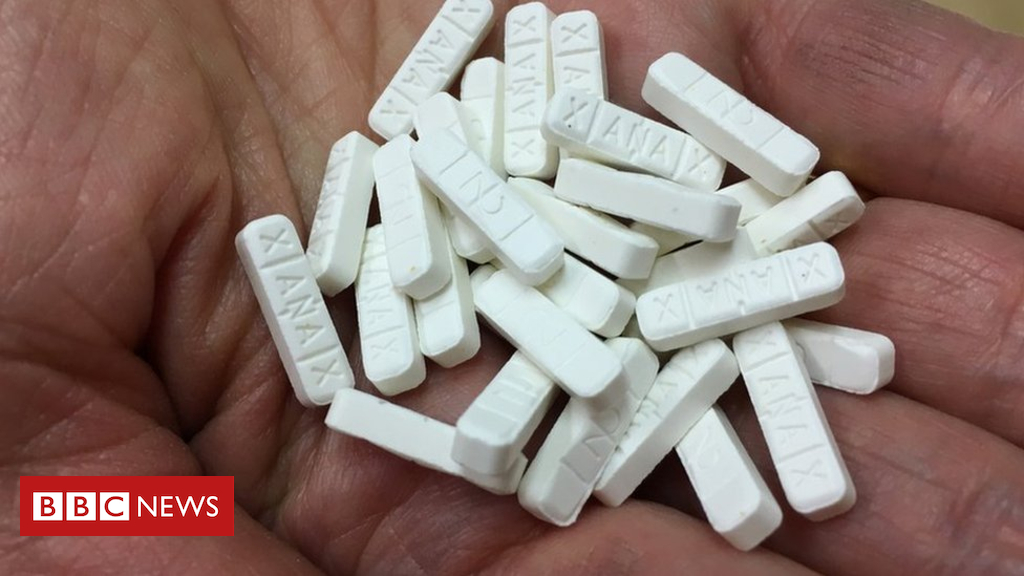 The coroner for Northern Ireland has called the rising number of deaths linked to fake versions of the anti-anxiety drug, Xanax, “an escalating crisis”.

Joe McCrisken says he is signing off an alprazolam-related death nearly once a week.

He says “most of the deaths” are caused by counterfeit versions of Xanax, the brand name for the drug alprazolam.

“The deaths are a very tiny tip of what is a very huge iceberg,” he says.

Xanax is used to treat anxiety and panic attacks. It is not available on the NHS. It is a powerful tranquiliser.

But it can be obtained on private prescription in the UK, is widely prescribed in the US, and counterfeit versions circulate on the black market.

Last year, the BBC found that children as young as 11 were being treated by ambulance services after taking fake versions of it.

Mr McCrisken said the number of deaths linked to alprazolam in Northern Ireland had risen from one in 2015, to 26 in 2017.

“That’s an indication of not an emerging crisis, but an escalating crisis. It’s a very real public health concern.”

Case study: My head was away

Paul, 20, started taking counterfeit Xanax from the age of 17 after being introduced to it by a friend. He said he initially took it to help with his anxiety.

Paul admitted to taking other drugs – but said fake Xanax had the worst effect on him as he had no idea whether it had been cut with other substances.

“It’s made me psychotic and stuff and made me not be able to control my anger.

“People nowadays are just playing Russian roulette with tablets, they’re just trying to see what the next hit is.

“But it’s not worth it. Too many young people are dying from the fake stuff going about.”

Paul says he is exceptionally lucky to still be alive, considering his abuse of the tranquiliser and other drugs.

“One night I took 56 of them. That was on a Friday. And I didn’t wake up until the Sunday. That’s when I went round to my Mum’s and smashed her TV, then had her pinned up against the car. I didn’t know what I was doing.

“I didn’t think I would make it to the age of 20 because of the stuff I was doing. They make you suicidal.

“Even after I am off it, I still have to deal with the voices in my head. I have to still deal with all the mental health problems.”

Paul said dealers would offer the drug to passers-by on the street.

“It’s silly because you’ll have 13-year-old kids running about trying to sell you the drug on the street corners.”

Paul underwent a residential rehab treatment and has been clean for just under a year.

Mr McCrisken said when he started the job three years ago, he had never heard of counterfeit Xanax.

“The alprazolam powder is being obtained from the Far East, I was told in one inquest, and then pressed in the UK and sold on the dark web.”

Because Xanax is not available on the NHS in the UK, Mr McCrisken believes almost all the deaths linked to the drug in Northern Ireland are from counterfeit versions.

“We can’t underplay this; it’s hugely concerning. The sheer escalation of deaths, involving alprazolam as well as other drugs, but particularly that one, as a coroner, concerns me.

“This is one that seems to have emerged out of nowhere, really, and it’s escalated to a degree where it should be concerning everybody.”

He added that the problem was UK-wide. Figures from Scotland showed a four-fold increase in deaths related to alprazolam from 24 in 2016 to 99 in 2017.

In 2018, Public Health Wales reported that counterfeit Xanax was among the “most commonly identified” classes of psychoactive substances analysed by the Welsh Emerging Drugs and Identification of Novel Substances Project’s (WEDINOS) drug testing service.

Peter Burkinshaw is the drug and alcohol lead for Public Health England.

“We’ve got no evidence that there is a very widespread epidemic of its use, but we’re certainly clear that its use is increasing,” he said.

In December, Public Health England released figures showing the number of young people being treated for addiction to benzodiazepine drugs like alprazolam.

The report showed that alprazolam had the biggest increase in young people seeking help for addiction.

Dr Michael McKenna, a GP at Falls surgery in Belfast, said counterfeit Xanax has become a particular problem among his patients over the last six months.

He is mainly treating teenagers and people in their early 20s.

“We had a number of drug deaths over the Christmas period and I’ve heard Xanax being mentioned as one of the drugs that has been taken.

“We’ll know when the post-mortem findings come out.”