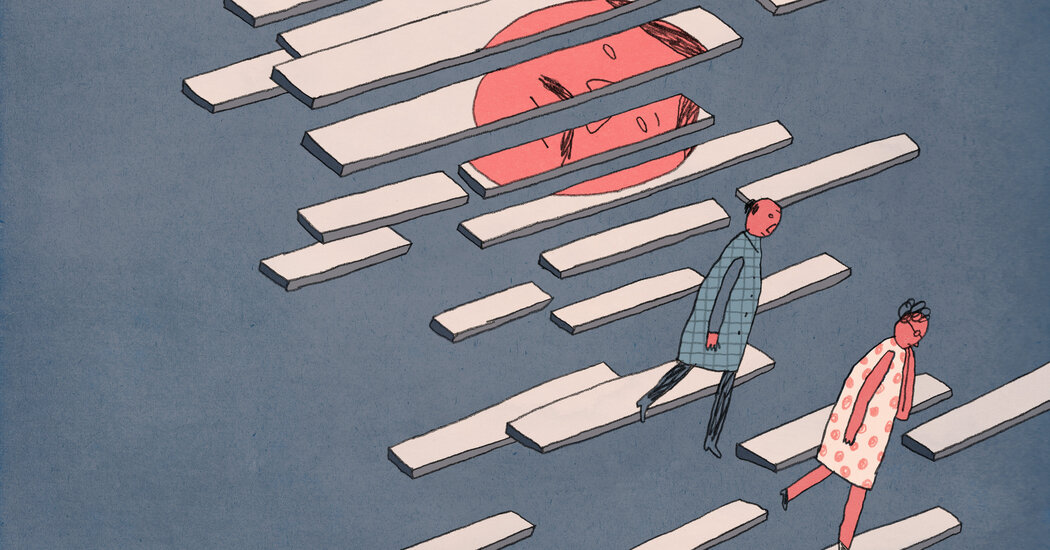 Unlike my mother’s usual emails (with the entire message crammed into the subject line), this one had no text, only an attached photo. I clicked on the file and reeled at the picture of her, emaciated, with a deep gash above her bruised eye.

I called immediately. “Mom, what happened?”

Between our terse conversations and images like this, I hardly recognize the once talkative woman who tended to my needs and listened to my desires as a child.

In all fairness, as her transgender son, I realize there have been times when she has found me unrecognizable, too.

Thirteen years ago, when I was 34, I injected myself with testosterone for the first time and began a physical transition from female to male. Very quickly, my voice lowered, muscles grew and hair appeared all over my body, except, unfortunately, where my hairline started to recede.

For the first time, I felt right, whole. The image that greeted me in the mirror reflected what I had been feeling inside. What didn’t transition so smoothly was my relationship with my parents.

Early on, they wrote me a letter encouraging me to reconsider my decision to become a man. The message, while cruel, was likely founded in misinformation, fear and concern for me, but that was no comfort in the midst of a life-changing journey, which now would not include their support. Over time, our relationship healed — somewhat. Mostly, we just didn’t speak about it.

Then, in 2015, my father emailed me, acknowledging his difficulty recalling words and confirming that a recent MRI indicated early signs of Alzheimer’s. Three years later, my mother learned that she had it, too.

A visit with them at their house last summer confirmed they were both entrenched in a mire of dementia from which they will never escape. My father and I sat in armchairs while my mother looked out the living room window and said, “I need to call the tree guy about those white rectangles,” wondering aloud why the wind hadn’t knocked them from the branches.

I followed her gaze but couldn’t see the rectangles.

It took me a minute to see what she saw: light from the skylights above us bouncing off the window glass and forming rectangular reflections, which appeared to her to be outside.

Read More:  4 People on When They Realized They Had Foot Fetishes

Difficulties with spatial relationships and depth perception are common among people with Alzheimer’s. My parents have the other typical symptoms also: memory loss, confusion about where they are or what time it is, inability to hold a conversation, moodiness, paranoia. And, in my father’s case, increasing difficulty with walking and eating.

[Sign up for Love Letter, our weekly email about Modern Love, weddings and relationships.]

These changes are upsetting to us in different ways. My parents were trained as journalists and worked as writers. Now they are frustrated by their inability to use language in ways that used to feel so natural. My father rarely speaks, and my mother can only form sentences on good days. Even then, she calls keys “stuff that goes with my car.”

This, and the slow erosion of their independence, starting with the cancellation of their drivers’ licenses and the opening of their home to round-the-clock care, has them feeling defeated. As a child of parents with a terminal illness, I am obviously upset, too. Unexpected, however, is the sense that my identities as a man, husband and father — all predicated on my gender transition — seem to be falling away, too, as their dementia progresses and they forget who I am.

My gender shift was just the start of many changes: a year after I began my transition, a mutual friend introduced me, via email, to a bold woman with a big personality and irreverent sense of humor. We didn’t meet in person until two months later when I picked her up at the airport on a Friday night. We got married that Sunday.

In the years since, we adopted two boys from foster care when each was 9: our first in 2012 and his younger brother three years later. Then, in a manner of months after the November 2016 presidential election, the four of us left our home, jobs and friends in the United States and emigrated to Canada.

People are often curious about the speed with which these life changes occurred. Wasn’t it risky to marry someone after knowing them for only a few days? Didn’t you miss too much of your children’s lives, adopting them when they were older? Weren’t you stressed deciding in March to move to a new country in May?

Read More:  What is cardiovascular assessment

I usually respond that these changes, although major, pale in comparison to changing one’s gender. Once you’ve done that, nothing else seems as risky, fast or profound.

Yet, the pace of these changes is matched only by the speed of my parents’ decline.

The nature of Alzheimer’s is that affected individuals often can recall memories from their distant past more easily than recent events. On good days, my mother can describe how in the late 1960s she “found” my father while working as a reporter at a small newspaper in Kansas, where, on one of the top floors, there was a “single desk and one chair to share.” When my father was brought in as a guest reporter on loan from The Kansas City Star, that week’s top story was: “Love Connection in the Newsroom.”

They both remember the birth of their first child too: a daughter. They named me Lesley, after the nurse whose sense of urgency saved my life. The story my mother still likes to tell is that the umbilical cord was wrapped around my neck four times. As she says, “Lesley, the nurse, told the doctor, ‘Get off the golf course and deliver this baby!’”

Their memories of my new life in Canada, however — along with the adoption of grandchildren they adore, my marriage and, most of all, my gender transition — are receding, if not already gone.

“Honey, what is the name of that man? Do you remember?” My mother pointed at the massive, plaster head atop a wooden platform in their living room. This sculpture of their friend Ernest was one of my father’s more successful forays into three-dimensional art. It used to occupy a prominent space in the hallway as one of the first things people saw when they entered my childhood home.

Hearing a familiar voice, my father turned to look in her direction.

“Never mind,” my mother said, moving toward the shelf. “I bet I kept a photograph of him. That’s something I would do.”

She grabbed the head, tipped it to its side, reached up into the neck and pulled out a photograph. It was a photo of the sculpture itself, not of Ernest.

Read More:  Study: With acne, you're at increased risk of depression and anxiety - Insider - INSIDER

She looked at the sculpture and compared it to the picture. “Wow, you have such amazing talent,” she said to my father. “Your sculpture looks just like the man in the photo!”

If my parents are unable to recognize the difference between a photograph of a white plaster sculpture and one of an actual person, how much longer will they be able to recognize me as their child, much less their son?

Last summer, while I was sitting with my parents at their kitchen table, my mother finished her lunch, stood up and announced, “I’m going outside to pull some weeds.”

I waited indoors with my father as he finished his meal, until tears began flowing down his face.

He apparently believed that because she had left his sight, she was dead.

I used to ask myself: “Will I lose my new identities once I can’t be identified?” But after witnessing my father sobbing at the table, I have learned the answer. My mother just left the room. The fact that he didn’t remember didn’t mean she no longer existed.

Likewise, the fact that my parents will lose their memory of my transition won’t mean I will cease to be a man, a devoted husband, a loving dad and my parents’ son.

My parents were instrumental in creating the framework that supports who I have become. Then, over the last 40 years, they witnessed me assuming the responsibility of building upon that foundation. Although they haven’t always agreed with my choices, they came to accept me for who I am.

As Alzheimer’s eats away at their sense of who I was and who I have become, I hope it will be my essence that they retain. That’s what matters most, for any of us.

Les Tyler Johnson is a teacher and writer who lives in Halifax, Nova Scotia.

Modern Love can be reached at modernlove@nytimes.com.

Want more from Modern Love? Watch the TV series; sign up for the newsletter; or listen to the podcast on iTunes, Spotify or Google Play. We also have swag at the NYT Store and a book, “Modern Love: True Stories of Love, Loss, and Redemption.”