I was fortunate enough to attend the 18th Asian Achievers Awards 2018 in September, an event held to celebrate the achievements of some exceptionally talented people in the British Asian community across the arts and media, sports, community service, as well as the professions, uniformed services and the world of business. Hosted by Eastenders actor Nitin Ganatra and KissFM’s Neev Spencer, the event was attended by celebrities, entrepreneurs, industry leaders and MPs. On the night an extra £100,000 was made through donations and an auction for the Oracle Cancer Trust. 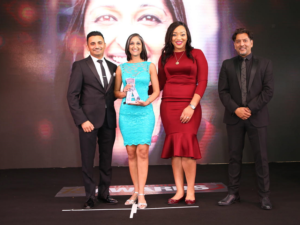 I’ve been raising awareness of multiple sclerosis and other chronic conditions for 10 years, since I was diagnosed with multiple sclerosis at the age of 28. Like everyone else who works tirelessly to help people with debilitating illnesses, I’d never even dreamt of winning awards for my work. So it was a big surprise when I learnt that somebody had nominated me for the award of Woman of the Year and it was an even bigger surprise, while sitting in the suited and booted crowd at The Grosvenor House Hotel, to hear my name announced as the winner.

I’m so happy to win this award because it gives a platform to being able to further raise awareness about multiple sclerosis, chronic illness and disability in general but also specifically in the Asian community. On the awards night alone, around 800 people went home knowing a little more about what MS is. This is how conversations start and that’s how we’re going to be able to break down the stigma, misconceptions and lack of knowledge that is still attached to chronic illness and disability.

In the bigger picture, the whole healthcare industry is gradually making a positive change. In the last few years particularly I’ve seen more organisations willing to make the change. We’re definitely making a step in the right direction. However, there’s still a long way to go on this journey. I have a few big goals with my work with the third sector, NHS and healthcare industry in the near future. I really hope to see a lot more collaboration between stakeholders, the NHS, patients, clinicians and pharmaceutical companies. At present there’s still not enough collaboration between these stakeholders – often because one party has not moved as fast as the others. Ideally, it should be one big partnership. As it stands today there’s still a hierarchy and, sadly, the patient is often at the bottom, but we should all be working together on the same level.

Trishna Bharadia is a multi-award winning chronic illness and disability advocate, with a particular focus on multiple sclerosis (MS), diversity issues in healthcare and patient engagement. She was diagnosed with MS in 2008, aged 28. She works as a Spanish>English translator but in her spare time raises awareness of and improves support/services for people with chronic illness. She blogs, vlogs, is a regular media contributor (TV, radio, online/printed press), advises on projects, speaks at conferences and events and writes articles about issues affecting people with chronic illness. She’s a Patron/Ambassador for MS Society UK, Sue Ryder, ParaDance UK and the Cambridge MS Therapy Centre. As a result of her advocacy work, in 2015 she put MS on the national map in the UK by being chosen to take part in a special four-part edition of Strictly Come Dancing on BBC1, where she smashed stereotypes of people with MS and hidden disability. She loves Zumba and hockey, and her motto in life is “think about how you can do something rather than the reasons why you can’t.”

Read More:  What year will diabetes be cured