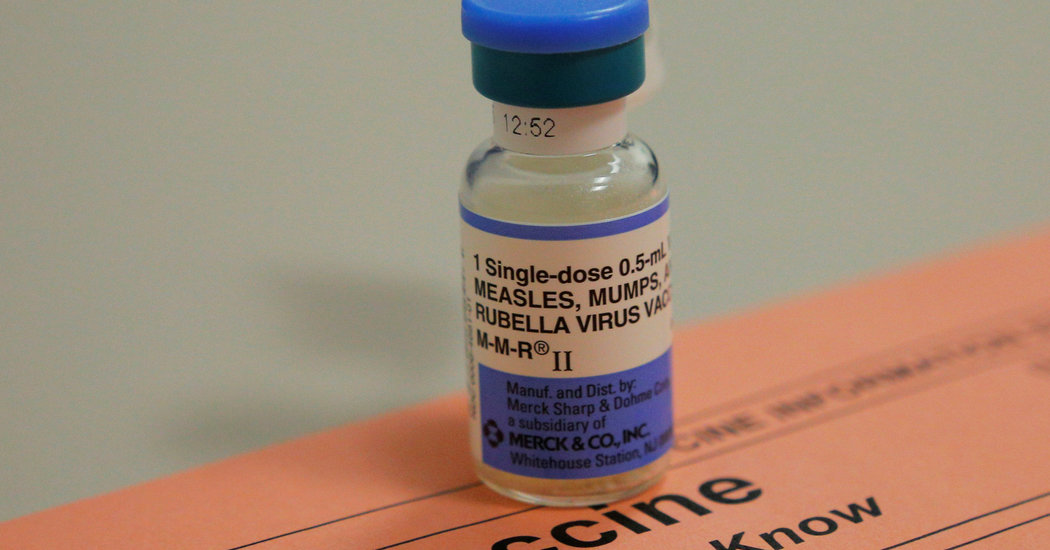 Measles isn’t only in the headlines these days; it may also be on your airplane.

An adult contagious with the disease flew from Asia to San Francisco in February, infecting two others — one adult and one child — during the flight, California health departments said this month.

It’s an inauspicious development in a year that has already seen 228 cases of the serious and potentially lethal disease in 12 states, including six outbreaks of at least three people. All the outbreaks in 2019 have been linked to travelers who carried measles from countries with lower vaccination rates, according to the Centers for Disease Control and Prevention, and sickened people in areas of the United States where residents were not vaccinated.

Last year, 82 of the 349 people diagnosed with measles carried them into this country from elsewhere, the highest number of imported cases since the virus was declared eliminated from the United States in 2000, the C.D.C. said.

With 17 countries under a C.D.C. travel watch because of their high measles rates, including popular destinations like England, France and Italy, halting the spread of measles by travelers doesn’t seem likely anytime soon.

A record 81 flights were investigated in 2018 for carrying at least one person contagious with the disease, up from 15 investigations in 2017 and 10 in 2016, according to the C.D.C. Of the 106 aircraft, 66 were on domestic routes and the rest were inbound from foreign airports.

Because the United States has a fairly high overall vaccination rate against measles, the general population is largely protected by herd immunity. But there are states, and pockets within states, with far less compliance, and the concern is that infected fliers will transport measles to these vulnerable areas.

“Suddenly the single introduction of a case can have explosive consequences,” said Dr. Martin Cetron, the director of the Division of Global Migration and Quarantine at the C.D.C.

Measles is considered among the most contagious virus in the world. Unlike the influenza pathogens, which spread when a person sneezes or coughs but then falls, the measles virus remains suspended in air, “like really light dust particles,” Dr. Cetron said, allowing the pathogens to linger and float for up to two hours.

Influenza is spread by an exponent of two, meaning each person who gets it is likely to infect two others in a setting where people haven’t been immunized he said. Measles is likely to be spread to between nine and 19 people who are not immunized, depending on the setting and the herd immunity of those nearby, he said.

In 2014, a 19-month-old child connecting on a flight from India passed measles on to a man at a Chicago airport, even though they didn’t fly on the same plane. The man had arrived from Minnesota and disembarked at the same gate where the toddler was waiting to board the return flight.

“Although transmission could have occurred anywhere in the airport where the child and the adult shared airspace, it most likely occurred in the gate area” the C.D.C. wrote in its report on the incident. It did not identify the airport.

The child had received a vaccination against measles at 12 months, but not the recommended booster. The man’s immunization history was unknown. No notification system is set up to alert at-risk travelers of potential measles exposure in airports.

On planes, however, the law requires that the C.D.C. be contacted when health officials identify someone with the measles as having been contagious while onboard. In those instances, health officials use the flight manifest to contact those seated within two rows of the infected passenger. They also notify anyone on the plane with a lap child, on the premise that they are more likely to wander around the aircraft, the C.D.C. said.

Read More:  How to Help Your Active Client Set Training Goals During Pregnancy

If an unvaccinated person can be notified quickly, then within 72 hours of exposure they can receive a dose of the MMR vaccine, which might prevent them from getting the disease or lessen its severity. If notification comes within six days, or if the person is not eligible to receive the vaccine and is notified within that time frame, then they can receive a shot of immunoglobulin, which are pre-made antibodies.

Measles Outbreak: 1 Student Got 21 Others Sick

As Measles Outbreak Flares, Vaccination Rates Soar and Some Come Off the Fence

“The protection from both of these is definitely not 100 percent, so none of these is as good as being vaccinated beforehand,” said Dr. Matthew Zahn, medical director for epidemiology for the Orange County Health Care Agency in California.

On a plane that carries a contagious traveler, the other people most vulnerable are those who are too young to be vaccinated, who have opted out of getting a vaccine for personal reasons, and the 3 percent to 5 percent of the population who have compromised immune systems because of cancer, advanced rheumatoid arthritis treatments, and other causes, Dr. Zahn said. They may not be eligible to receive the MMR vaccine, a live vaccine which protects against measles, mumps and rubella.

“There is a potential for exposure in your community, that’s the reality we live in,” Dr. Zahn said. “Airplane travel in general is one of those instances where that risk becomes a bit higher. People should be aware of that.”

Most travelers can take steps to ensure they have protected themselves and those around them:

In addition, an estimated 600,000 to 900,000 people between 1963 and 1967 received a different type of vaccination against measles and didn’t develop an immunity. Those individuals should be revaccinated.

52 PLACES AND MUCH, MUCH MORE Follow our 52 Places traveler, Sebastian Modak, on Instagram as he travels the world, and discover more Travel coverage by following us on Twitter and Facebook. And sign up for our Travel Dispatch newsletter: Each week you’ll receive tips on traveling smarter, stories on hot destinations and access to photos from all over the world.