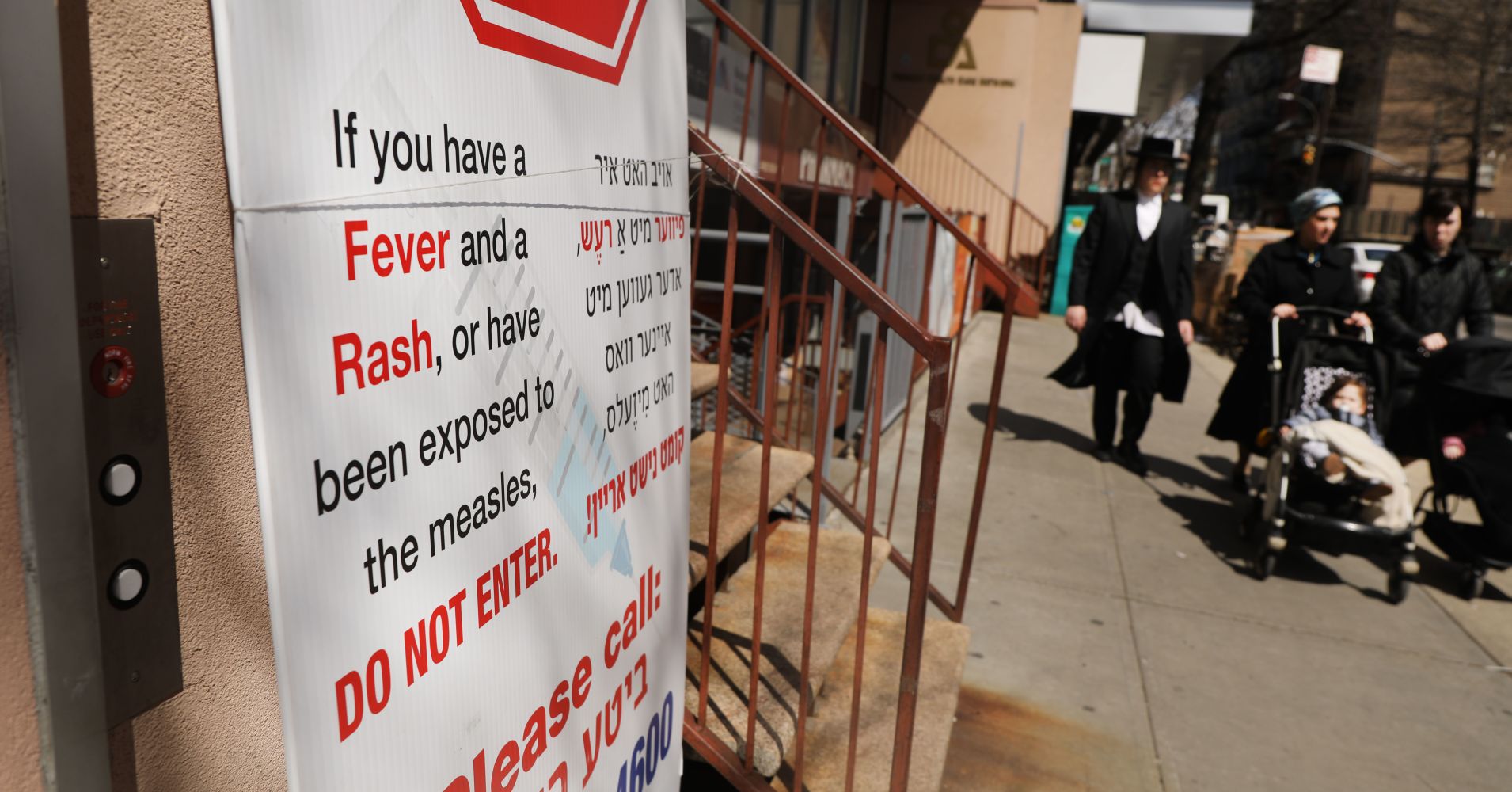 Rebecca Feldman would like you to get a few facts straight about measles.

public health emergency under which people who don’t get their children vaccinated face fines. With the start of Passover this past weekend, the risk of spreading measles increases as families gather for the eight-day holiday.

Feldman, who is on maternity leave, said she has personally been putting in more than four hours a day debunking misinformation in the booklet, which is being passed around in ultra-Orthodox Jewish communities in two Brooklyn neighborhoods.

She said Peach has waged a “pretty good propaganda effort” in the Williamsburg and Borough Park neighborhoods of Brooklyn. As of Monday, the city has confirmed 329 cases of measles, including 44 in the previous week. Health officials expect that number to rise as some parents refuse to vaccinate their children.

The authors and financing behind Peach have remained mostly anonymous, with several participants going by pseudonyms. Emailed requests for comments from CNBC were not returned.

The booklet takes original, anti-vaccination beliefs and applies them to passages of the Bible. It also includes letters signed by some rabbis decrying vaccination as well as “cherry picked” and outdated research, Feldman said. The group also runs its own anti-vaccination hotline for parents to call and listen to a recording that plays up fears that the measles-mumps-rubella (MMR) vaccine causes autism, a theory that’s been thoroughly debunked by medical doctors.

Read More:  Reflections on 2020: You can’t mask this reality

The city’s health department said Monday it closed a child-care center recently after it failed to provide vaccination records. City officials said they notified 23 child-care programs and yeshivas — Orthodox Jewish schools — that they were in violation of the city’s order to keep unvaccinated children out of school. The United Talmudical Academy in Williamsburg was the first one that was closed under the city’s new mandatory vaccination order.

“We’re doing everything within our power to end the outbreak, undertaking many many different strategies and activities at once,” Zucker said. “But I think it’s going to go on a little while longer.”

Feldman and her fellow nurses, members of the Orthodox Jewish Nurses’ Vaccine Task Force, are frantically working on their own handbook called Pie, short for Parents Informed and Educated. They’re going page-by-page against Peach, seeking to refute its claims by providing full explanations of information the nurses say has been misconstrued and denouncing some of its information with data and research from reputable institutions.

“None of us thinks that the people choosing to not vaccinate are doing it for a negative reason,” Feldman said.
“They’ve been told a lot of bad information.”

The Vaccine Safety Handbook from Peach was mailed and hand delivered to homes around Brooklyn, she added, “putting [misinformation] directly in the hands of a vulnerable population.”

“One of the main things that we can provide that sets us apart, as nurses, we are trained to educate our patients,” Feldman said. The women are taking scientific literature and research studies and translating it into layman’s terms for ultra-Orthodox Jewish parents. Rather than dismiss their concerns, they cite studies and data that back up their points.

The Peach handbook, for instance, claims that no long-term studies have been done on vaccines and adverse reactions are only watched for a short period of time. That’s false, Feldman said.

Peach also scares parents away from vaccinating their children by citing deaths that were disclosed during clinical trials that had nothing to do with the vaccine, she said.

Drugmakers “report every adverse event that occurred to participants during clinical trials so comprehensively, that they even include things that are so clearly not related to the vaccine, such as death by motor vehicle accident,” Feldman said.

New York City has been sending out information on the MMR vaccine to Orthodox communities since this past summer, Zucker said.

“We knew from other outbreaks in the same community that there was increasing vaccine hesitancy,” she said. An important component, she said, is to work with rabbis in the community to discount some of the false claims in the Peach handbook, notably one that says the MMR vaccine violates kosher dietary law.

“That’s especially powerful to come from someone in the community. They’re going to be probably more trusted” than city officials, O’Leary said.

Feldman and her fellow nurses plan to distribute the Pie handbook across the neighborhoods in Brooklyn, where more than 95% of the city’s measles cases have been reported.

The vast majority of people are vaccinated. And although the number of unvaccinated children remains relatively small, “it’s enough” to fuel an outbreak,” O’Leary said.

Zucker said the city’s heard reports of “measles parties,” where people are deliberately exposing their children to measles to try to naturally immunize them to the disease.

“I myself had received calls from parents looking for measles cases. They’ll tell me they have a friend who has an idea they want to expose their child,” she said. “It’s a really bad idea.”

There’s an old idea that bringing susceptible children together with children who have contracted a disease, like chicken pox, will help children build antibodies to fight the illness. But there’s no way to tell how each child will react, he said.

“I can’t tell you if your individual child will do well or poorly with measles. We don’t want parents making that risk,” Clark said. While the majority of kids who contract measles recover, there’s the fear of infections alongside it. Some may end up with pneumonia, major diarrhea or swelling of the brain, Clark added.

More than 90 measles cases were reported across 20 states in a week, the CDC said Monday. That brings the total this year to 555, the second-highest number of reported cases since federal health officials declared measles eradicated from the U.S. almost two decades ago, according to the CDC.

Measles, which is highly contagious, can live in the air for up to two hours after a person carrying it has left the room and infects roughly 90% of the people who are exposed to it.

“Measles does not discriminate,” he said. The Peach handbook “is a terrible document. … They really focused it specifically on this Jewish community to play on their religious beliefs.”

The Orthodox Union, one of the nation’s largest Orthodox Jewish organizations, even came out in favor of vaccines in November, saying the measles outbreak could bear “very serious consequences.”

However, it’s been hard to squash the fear once it’s been implanted in a parent’s mind.

“It’s easy to poison the well in the sense that once you install fear in someone’s mind it’s very difficult to get that fear removed,” O’Leary said. “Taking a fear out of someone’s mind is much more difficult than putting it in.”