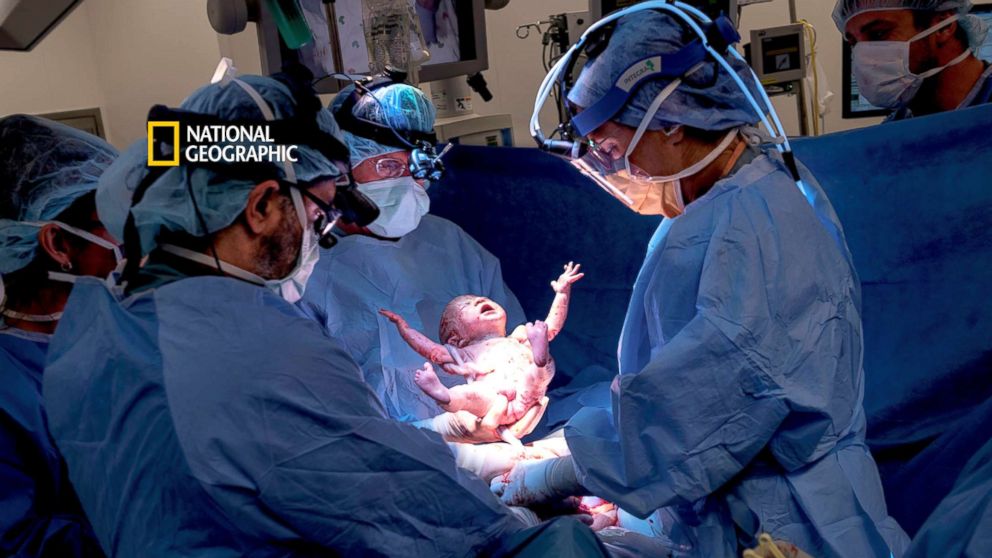 “Why giving birth in the U.S. is surprisingly deadly” is part of National Geographic’s special-edition, single-topic issue on “The Future of Medicine,” available online now and on newsstands Dec. 21.

Rachel Jones was the ninth of her mother’s 10 children, but she never thought to ask about her birth.

Growing up poor in Cairo, Illinois, Jones said she always wanted to become a writer, and in the intervening decades, her work had taken her across the U.S. and East Africa. But it wasn’t until she began working on an assignment for National Geographic about the dangers women face while giving life that her own birth started to hit home.

“I was the ninth of her children and one of only three who were born in a hospital,” Jones told ABC News. “All the rest of her children were born at home. As I began to look into this story, I thought, ‘Who helped deliver my mother’s babies? Was it an old granny down the street or a self-proclaimed community midwife, or a woman who had had a bunch of kids herself and never was formally trained?'”

“It brought up all these sentiments about my own mother and what she must have gone through, and it really opened me up as a journalist in a way that I probably wasn’t prepared for,” she added.

Pregnancy and birth are often thought of as one of the happiest, most magical, most transformative times in a woman’s life. But around the world, and right here in the U.S., it’s still a dangerous experience. In the U.S., there are 14 deaths for every 100,000 live births; a rate that has worsened between 1990 and 2015, according to the World Health Organization.

Read More:  Focus on Menopause and Mental Health in the News

In Africa, 20 countries have maternal mortality rates above 500 for every 100,000 live births, but the rate is generally falling, according to the WHO. Maternal mortality refers to women who die not only during pregnancy and childbirth but also within six weeks after giving birth.

Mothers around the world largely face the same dangers: preeclampsia, postpartum hemorrhage and dangerous infections that lead to sepsis, among others. But the care they receive before, during and after birth varies widely. Jones set out to report on those differences, teaming up with Lynsey Addario, a photojournalist who had been documenting maternal health and mortality for the better part of a decade. Addario estimates she’s witnessed about 100 births during that time.

“I cry at basically almost every birth, there’s no question,” Addario told ABC News. “It doesn’t matter how many times I see a baby born, it is — as cliche as it sounds — a complete miracle. It’s incredible to see and to witness and to watch not only what the human body is capable of, but those first moments of a newborn taking his or her first breath. But then I am always conflicted because my role is to be there as a photographer, not just sort of stand there sobbing. So I have to also make sure I’m focused and getting that photograph.”

After receiving a MacArthur Fellowship in 2009, Addario reported from Afghanistan, one of the countries with the highest rates of women dying in childbirth.

“Often, women don’t have access to clinics or hospitals or medical professionals. There are few roads, or they don’t have a vehicle, or there is not an ambulance system. In some cases, there is no phone,” she explained. “So a woman who is in labor either has to take a donkey to get to the nearest clinic or she has to walk or hope she can find a ride. So often, women with complications end up dying.”

Read More:  What is cholesterol to hdl ratio

Then, in Sierra Leone, a woman whom Addario was photographing while giving birth began hemorrhaging.

“She literally died on camera, and for me, that was all I needed to say, ‘This is a very important issue,'” Addario said.

“In so many places, what I was seeing is that maternal death is, in large part, preventable. And so it seemed like it was ignorance or just a lack of effort to provide women with transportation, prenatal care, midwives, postnatal care. All of these basic things were just not there.”

In “Why giving birth in the U.S. is surprisingly deadly”, Jones and Addario also explore the racial disparities and biases that make African American women 2.6 times as likely to die due to a pregnancy-related cause as white women.

“You cannot take childbirth for granted. People assume that because women have been giving birth since the beginning of time, it’s just so natural to be able to deliver and deliver safely and have that Dove-fresh glow that we see in commercials where everyone looks so perfect. That is absolutely not the case,” Addario said. “Every single woman has the right to a healthy birth. Giving birth should be a basic human right.”

Along the way, Jones and Addario met some of the birth equity activists — academics, doulas, midwives and others — who have “formed a literal army in the U.S. to provide the services and support in low-income, African American communities and communities writ large,” Jones said.

But much more needs to be done to ensure African American mothers are heard, respected and given the best care available.

“The fact is that race, bias, how their stories are interpreted and heard, really do have an impact on the health care setting,” Jones added.

And it means a lot, Jones said, to talk about this issue in this forum.

Growing up, Jones remembers her mother, who died in 2005, bringing home magazines from where she worked as a maid so her children could read them. One of them was National Geographic.

“For me, at this point in my life, to be published in National Geographic is an incredible privilege, honor and testament to [my mother’s] work,” Jones said.

This story is a collaboration between National Geographic and ABC News, whose parent company is Disney.