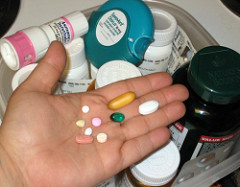 This must be a mistake! How could his drug costs rise from $ 150 a month to $ 1101 in just three weeks? My hands shook while I read the pharmacy bill.

There was no mistake. The bill I held recorded the drugs ordered by my fathers Alzheimers’ care unit. In only three weeks at this eldercare facility, his drug expenses had soared an incredible 734%. Ironically, his quality of life had plunged about the same percent. Walking and talking when he entered, he now spent his days confined to a wheelchair, unable to walk, drugged into a persistent stupor.

“I’ve got to do something.” The thought haunted me all day.

Then, that evening, an incidental trip to the grocery delivered the help I needed. It came in the form of a thick paperback book, The PDR Pocket Guide to Prescription Drugs (PDR Pocket Guide).

The PDR Pocket Guide provides tons of information for all prescription drugs on the market when it was printed. Specifics include:

why the drug is prescribed,

how it should be taken,

when it should not be taken,

side effects and special warning, and

possible interactions with other drugs and food.

The PDR Pocket Guide is available through Amazon.com, or you might find a copy like I did at your local grocery or bookstore. Jam-packed with almost 1700 pages of information, this paperback is a surprisingly affordable $ 6.99.

Using the pharmacy’s bill as a list of medications, I read the PDR report for each drug my father was using. What I found astonished me.

Two of fifteen drugs prescribed were being used “off-label” (not FDA approved for the condition it is used to treat). One of those was specifically contraindicated for use with Alzheimer’s patients. Two more were from drug families that I had previously identified as causing allergic reactions in my father.

Read More:  If You Read One Article About Rehab, Read This One

When I was young, my father used to kid me by saying, “Up with this I will not put!” Up with this I wasn’t about to put either, so I called his doctor.

“My father is allergic to Furosemide.”

He bristled. “Where did you get an idea like that?”

“Furosemide is a sulfa drug. He’s allergic to sulfa drugs.”

“I never heard anything like that about Furosemide,” he barked. “Who told you that?”

“Well, the PDR has a lot of stuff you don’t need to know.” His arrogance grated on my nerves.

“No more Furosemide.” Now I wasn’t asking, I was demanding. “You’ve seen his rash. He didn’t have it when he came to the care unit.”

“You’re not qualified to say what he should or should not have.”

“What am I doing,” I wondered, “arguing with a doctor who should be helping?” I wish I’d spoken the words I thought next. “Bye-bye! You’re fired!”

But, in that moment, I resolved to be fully in control of all my father’s drugs. I would learn everything I could and provide drugs direct to the facility. . .or not. There would be no more ordering drugs without my specific authorization

I enlisted the expertise of a pharmacist I found just down the street. She graciously took time from her crowded day to answer all my questions and explain anything I didn’t understand. She took a brief history of my father’s illness, made note of his allergies, and offered money-saving suggestions. She focused on providing excellent service. In short, she was, and is, an angel.

I immediately began to look for another physician to take over my father’s care, but I was too slow. Within a few weeks, my father died of complications from a massive insulin overdose.

Was my experience unusual? Probably not, according to a study from the Medical Expenditure Panel Survey (MEPS). On the subject of the increased cost of pharmaceuticals for people over-65, the study’s author, Marie Stagnitti, MPA, reports:

Overmedication is not only crushingly expensive for our elderly, it represents a real and present danger. You can do something about it. Please, learn about and oversee medications. You will help elders save money. You might even save a life.

A native Texas, Phyllis Staff lives in Dallas with her family. She is a writer and photographer whose work has appeared in scholarly journals and popular magazines. She is the CEO of thebestisyet.net (http://www.thebestisyet.net) and author of How to Find Great Senior Housing: A Roadmap for Elders and Those Who Love Them (2nd edition).