Nearly everyone these days seems to be promoting whole foods over processed foods. Think about how terms like ‘whole grain’, ‘clean eating’, ‘all natural’, ‘functional’ and ‘local’ have taken over the lexicon.

Yet, until now, there has been scant scientific evidence to support the eat-whole-foods movement. 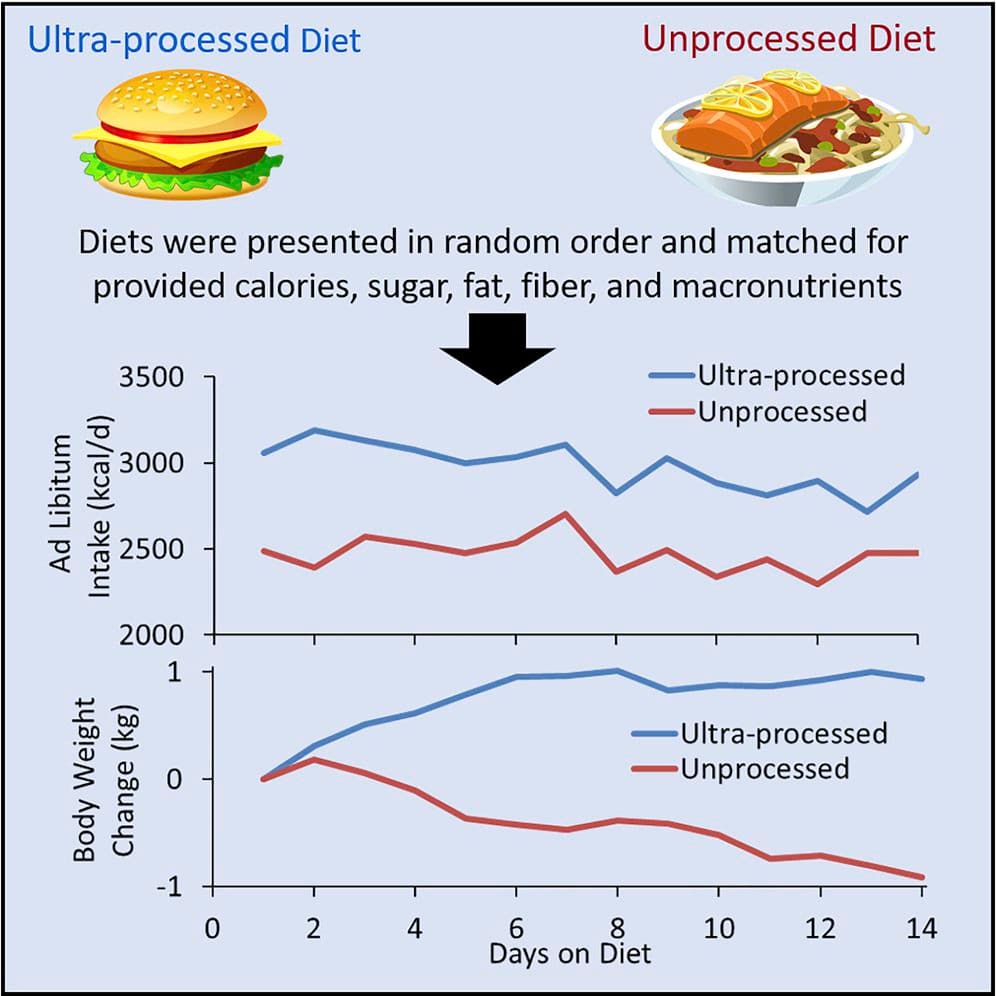 The NIH paper, published in Cell Metabolism in an issue dated August 6, also offered some surprising theories to explain the benefits of minimally processed foods. At the same time, it acknowledged that ultra-processed foods make several important contributions to the nation’s diet.

The NIH research was led by Kevin Hall, a mathematical modeler who has become a global obesity expert in the past decade. Hall is known for his precise research methods, his sharp analysis of the outcomes, and his nondogmatic views on the worldwide obesity crisis. He doesn’t believe in simple solutions, magic foods or this week’s top-selling diet book.

It enrolled 20 healthy young adults (10 men, 10 women) who agreed to live in a clinic setting for 28 days in a row. This meant they had access only to those foods provided them.

For 14 days, subjects received either an ultra-processed or minimally processed diet; then they were switched immediately to the other diet for 14 days. In both cases, they were allowed to eat as much or as little as they wanted.

This procedure reached the level of a randomized, controlled trial (RCT), considered the “gold standard” for research seeking to establish cause-and-effect associations. Such RCTs are few, because of the high expense, and rarely last 28 days.

The results were eye-popping. Subjects consumed 500 calories per day more on the ultra-processed diet than the minimally processed diet (about 3,000 calories a day vs. 2,500 calories). As a result, they gained two pounds in 14 days, just as short-term calorie math would predict.

The big calorie and weight changes occurred even though investigators manipulated the diets to make them as alike as possible. Both diets contained the same relative percentages of carbohydrates, fats, proteins, fiber, sugars, sodium and nutrients.

This was accomplished, in part, by adding soluble fiber to beverages served on the ultra-processed diet, and making sure that the minimally processed diet included plenty of fresh fruit, high in natural sugars.

The ultra-processed diet wasn’t as junky as you might think. It didn’t contain a lot of chips, cookies, candies and sodas but rather convenience foods such as canned soups and grains-in-a-pouch.

“If the ultra-processed diets were allowed to vary in the expected way from the unprocessed diet, it might have led to a larger difference in calorie intake,” Hall commented by email.

In a June presentation at the annual meeting of the American Society for Nutrition, Hall said we should not allow ourselves to be fooled by processed foods.

Projecting photos of a homemade stew with beef and vegetables and a commercial veggie burger, he noted: “The ultra-processed products are not variants of the foods and meals. They are formulated from industrial ingredients and contain little or no intact food.”

Why do processed foods induce more eating and weight gain than unprocessed foods? The NIH trial was not designed to answer that question, but Hall and co-workers uncovered an interesting possibility.

They also contain more calories for a given volume of food. That is, they have a higher “energy density”.

It generally takes about 20 minutes for the gut to release hormones that reduce our appetite by telling the brain we are getting full. When we eat quickly, our calorie consumption may race ahead of the gut-brain connection.

The NIH data supported this, revealing more PYY (an appetite reducing hormone) and less ghrelin (a hunger hormone) in subjects eating unprocessed foods. “These are plausible hypotheses regarding the mechanisms underlying the observed differences between diets,” said Hall.

“We speculated that the insoluble fiber content in the unprocessed diet may have led to reduced calorie absorption and increased satiety,” said Hall.

The NIH paper is not a broadside against processed foods. The researchers point out that processed foods cost 60 percent less than unprocessed foods, deliver food energy and nutrients, are offer great convenience in a hyper-speed world.

Hall and colleagues note that you can work minimally processed foods into “a wide variety of healthy dietary approaches including low-carb, low-fat, plant-based or animal-based diets.”

In other words, choose the foods you want to focus on, and eat them in their whole or minimally processed form: Apples are better than apple juice, whole oats are better than commercial granolas, fresh or frozen turkey breast is better than packaged turkey bacon or lunch slices, and so on.

This article was originally published by The Washington Post.