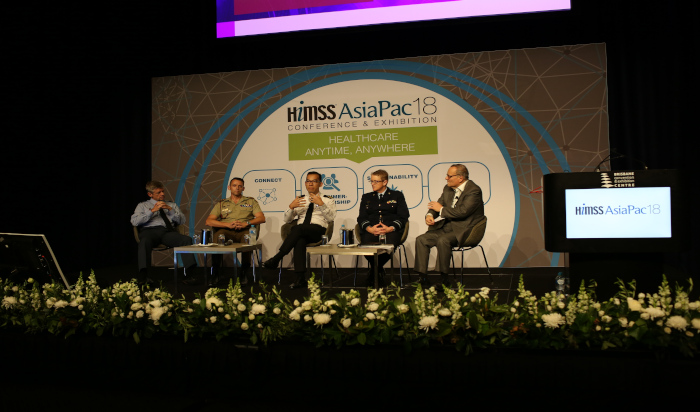 Setting the context regarding military health systems for the broad audience who may not have direct experience with them or understand how they work, Dr Charles Alessi, Chief Clinical Officer, HIMSS, who is also the moderator of the IMHIT panel on Day Two of the conference, explained that the populations in military health systems are not necessarily very old compared to civilian ones and not necessarily multi-morbid.

“There are a unique set of circumstances – firstly, there are the occupational health requirements in military health which are really very different to what you expect to find in civilian life. Secondly, care often has to be delivered in small, isolated communities and that in itself poses some significant challenges, often associated with clinical governors ensuring that clinicians that look after that population are in the right system and are really following guidance in the appropriate way.

When military personnel go to places on their own, they need systems of governance which are really quite robust,” said Dr Alessi.

He also added that are very unique challenges in terms of information exchange for military personnel and military systems. One of them is the fact that interoperability is as much of a problem in military health as it is within civilian life. Secondly, integration is a significant issue, such as integrating information back into civilian registers. The last challenge is cybersecurity, given the dangers associated with people being able to see the information and operating in environments where the Internet infrastructure may not be optimal.

The top two challenges and priorities in a military environment

“Security and the interoperability are the two main challenges, and interoperability because in the garrison environment, which is what we call healthcare in Australia on (military) bases. We have healthcare on bases but our personnel would also have to use civilian health systems as well, both private and public hospitals. The challenge for us is to be able run our system, which is a system within the Australian healthcare system, isolated but able to connect to those other environments as well.

Read More:  Can you cut clonazepam in half

But if we go overseas, we often work in parallel with both nations here in various missions – we have Australians, Singaporeans, British and vice-versa, how do we then ‘talk’ to those systems as well? How do we ensure the oversight and security of those information?” replied Air-Vice Marshal Tracy Smart, Surgeon General, Australian Defence Force.

Rear Admiral (Dr) Tang Kong Choong, Chief of Medical Corps, Singapore Armed Forces (SAF), expressed similar concerns: “Cybersecurity is also a big challenge of the SAF when implementing the military health IT system within the military IT system, and there are standards to be met. That was interesting because when we tried to integrate our military health IT system with the national healthcare IT system, there were a lot of challenges because we had to meet those stringent security requirements and it took a lot of time to do testing and vulnerability assessments.”

The other challenge that Rear Admiral (Dr) Tang mentioned was the personnel within the military that had the expertise to develop the health IT track that they are now looking at. Traditionally, the SAF does not develop staff in these areas of expertise, so it is about looking outward at how to better grow their people and maybe even bring in external experts who can advise on how to do things better.

“From our perspective, the main challenge of coming up with a fully-functional and deployable model is to clarify the taxonomy of that so we can actually operate on a global basis in austere environments and we can be part of that whole command decision-making chain so that we can garner and collectively use our data.

Read More:  Can rapid weight loss cause a stroke

The second challenge for us is a truly, fully integrated electronic healthcare records. We have a complex situation as we not only have four nations to deal with but within England particularly, the NHS has multiple different systems as well. So actually trying to achieve a fully integrated EHR within the UK is a challenge,” said Air Vice-Marshal Alastair Reid, Defence Medical Director, HQ Surgeon General, Ministry of Defence, United Kingdom.

Due to Singapore’s relatively small defence force, Rear Admiral (Dr) Tang said that the SAF does not run hospitals so the specialist care that is required for the service staff would be provided by (civilian) hospitals. Because of that, there can be a potential gap of knowledge of not knowing what happened to that service staff while he or she is in hospital, so that is where the integration of the National Electronic Health Record (NEHR) system has been very useful. SAF medical staff can access that information from their own EMR system through a contact switch and see what the service staff has undergone in terms of procedures, prior diagnoses as well medications that were prescribed.

“That gives us a very good understanding of the whole spectrum of care from the time the person has been referred till he or she has recovered, we are able to get that information through the integration with the NEHR,” he added.

For Lt Col David Bullock, Deputy Director, Health Knowledge Management, Information Warfare Division, Joint Capabilities Group, Australian Defence Force, Australia, the real benefits from health information exchange in the military and digitisation of the defence force lie in the data generated from service staff that can be used for predictive and prescriptive models of care using analytics. For instance, studying the data and trends can potentially help reduce common injuries that happen to service staff. With that, the related risks can be understood better from an epidemiological profile, which allows for the provision of smarter training regimes.

“One of the real benefits that we got out of our e-Health system that we put in place in 2014 is data that we never had before. That data has really driven major efficiencies – over the course of the contract that we signed in 2012 to enable our services has saved us 51 million dollars over time. We are now actually able to compare per capita costs with the Australian population and it is not a big difference compared to the civilian population. It can drive better understanding of business even with that premium and a better way to deliver healthcare.

It just allows us to do our job better and our job is both caring for our people as healthcare providers and also enabling their operational capabilities. So it enables us to be better across the board from prevention, protection, treatment to then recovery and also transitioning them to their new life as a civilian post-service,” shared Air-Vice Marshal Smart.