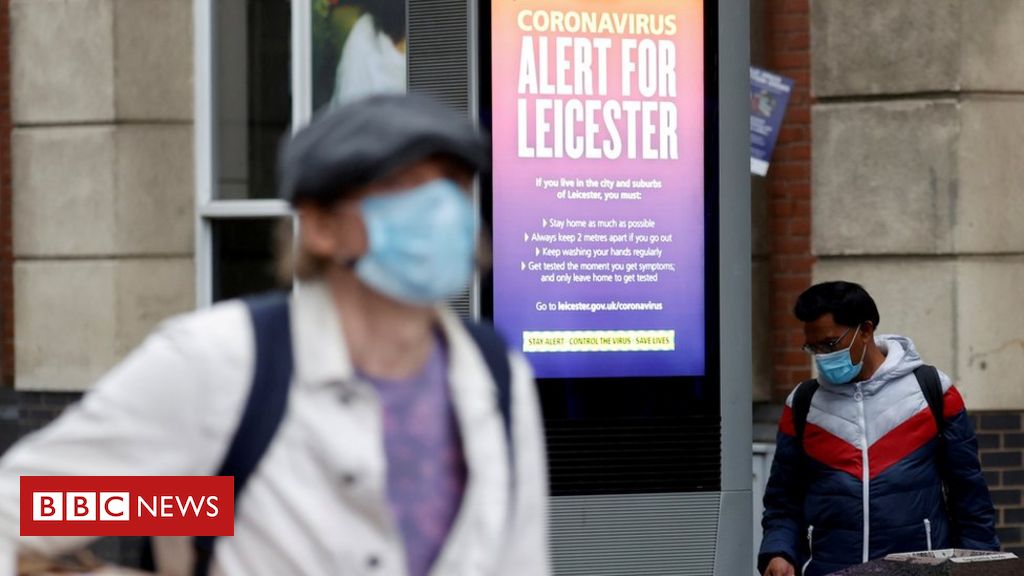 “Targeted action” is being taken against more than 100 local outbreaks of coronavirus every week, Health Secretary Matt Hancock has said.

Writing in the Daily Telegraph, Mr Hancock said increased testing meant officials could now be “targeted” in their response.

His comments came after 73 cases of Covid-19 were confirmed at a farm in Herefordshire.

Around 200 workers have been told to self-isolate following the outbreak.

It is now two weeks since Mr Hancock announced Leicester would be the first city in the UK to be put under a local lockdown. Restrictions are expected to be reviewed this week.

But he has stressed that most measures to contain the coronavirus will not involve a whole city but instead centre on much smaller areas, even just one business or building – and he says these interventions often go unreported by the media and unnoticed by all except those directly involved.

The government strategy of targeted local responses whenever data suggests a coronavirus flare-up is a key part of its ongoing plan to reopen British businesses in different phases.

In the latest of these, beauty salons, spas, tattoo parlours and nail bars in the rest of England are welcoming back their first clients for almost four months, as national lockdown restrictions are eased.

In Scotland indoor shopping centres can reopen from Monday, while in Wales pubs, bars and restaurants can start serving customers outdoors and hairdressers can also reopen for business.

In his article for the Daily Telegraph, Mr Hancock said more cases were being found through testing.

“The result is we can lift more of the lockdown and take targeted action,” he wrote.

“Each week there are more than 100 local actions taken across the country – some of these will make the news but many more are swiftly and silently dealt with.”

Mr Hancock said England’s NHS Test and Trace service helped the government to understand how the virus was spreading “so we can hunt down coronavirus and keep it contained”.

The health secretary said there were now more than 250 testing centres and the government was also deploying a dozen walk-in testing centres in towns across the country.

“Where we find a cluster or outbreak, we send in extra testing, including mobile testing units that can be deployed anywhere in the country,” he added.

Clusters of cases in places like hospitals, factories or schools can also be dealt with by closing the premises.

This has already happened in several parts of the UK, including a hospital in Weston-super-Mare, North Somerset and meat factories in Cleckheaton, West Yorkshire, and Wrexham and Anglesey.

Leicester’s mayor Sir Peter Soulsby told BBC Breakfast that the lockdown in the city could have been prevented, if they had received data earlier.

He said after having “finally” been provided with “useful data”, they knew that around 10% of the city had recorded a higher transmission of the virus.

“It’s very clear when you look at the data that it’s a couple of areas of the city that have got a higher than the average transmission of the virus, and certainly the way in which the city has been locked down in its entirety, and indeed beyond our boundary, is not justified,” he said.

Read More:  Shining a light on super-spreaders of coronavirus misinformation

“We should have been able to know this many, many weeks ago and we should have focused on those areas, preventing the transmission there.”

Asked what counted as an outbreak, Justice Secretary Robert Buckland said “each case of course will differ” but: “I think we know it when we see it.” He said it could be when many individuals caught the virus in a particular area – such as a workplace, village or town.

And pressed on whether the virus spreading outside of a household or social bubble would constitute an outbreak, Mr Buckland said: “I defer to the experts in this.

“They know what an outbreak constitutes when they see it, and I think with each one that we see we get more knowledgeable, more sophisticated, and are able to respond in ever more appropriate ways.”

Under the government’s testing strategy, anyone with coronavirus symptoms should self-isolate and get a test. If someone tests positive they will be contacted by NHS Test and Trace, which will then contact any close contacts who will also be told to self-isolate.

NHS Test and Trace only operates in England. Scotland and Wales and Northern Ireland have their own contact tracing systems.

A further 650 coronavirus cases were reported across the UK on Sunday, according to the Department of Health.

The total number of people who have died with Covid-19 in the UK is now 44,819, a rise of 21 on the previous day – although figures tend to be lower at weekends because of reporting delays.