Healthcare was the first topic addressed on both nights of last week’s Democratic presidential debates in Detroit, and while the various positions expressed weren’t a surprise, the level of acrimony was. The candidates’ heated discussion over the merits of government-run healthcare exposed emotions that seemed to run deeper than the standard political fissures between the liberal and moderate wings of the party.

In Tuesday night’s debate, Sens. Bernie Sanders and Elizabeth Warren laid out their proposals for replacing the country’s private health insurance system with a single-payer “Medicare for All” platform. Meanwhile, former Rep. John Delaney and Gov. Steve Bullock pushed back on the progressive proposals as “fairy-tale” and “wish-list” economics, respectively. Former Gov. John Hickenlooper went so far as to predict that a Medicare for All platform would be “a disaster at the ballot box” for Democrats.

When their turns came, Mayor Pete Buttigieg, former Rep. Beto O’Rourke and Sen. Amy Klobuchar advocated middle-ground policies such as “Medicare for All Who Want It.”

Democrats May Be All Ears on Healthcare

While the Democratic candidates for president were clashing, Democrats nationwide — including independents who lean Democratic — may have actually agreed with both sides and the middle. That’s because Democrats hold conflicting views on the issue.

On the one hand, when given a choice between a healthcare system run by the federal government and one based mostly on private health insurance, 65% of Democrats and Democratic-leaning independents opt for a government-run system. 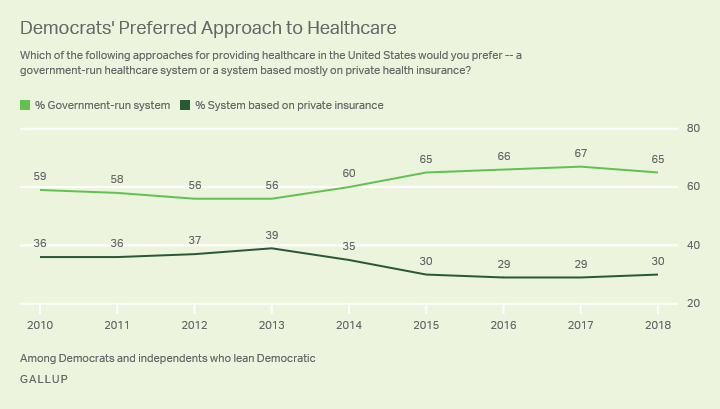 On the other hand, the vast majority of Democrats still approve of the ACA, and their support has only increased since Donald Trump took office, registering above 80% each of the past three years. 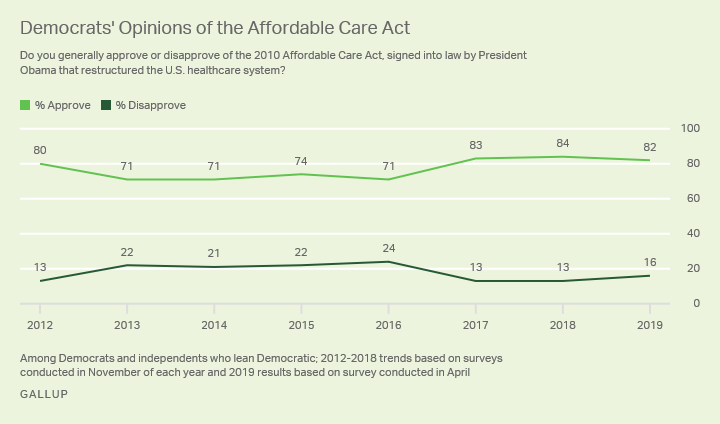 Democrats’ support for the ACA doesn’t mean they think the law is sacrosanct. Less than a third, 31%, want to keep the ACA intact while 58% think major changes are needed. Seven percent think it should be replaced with something else. However, the ACA represents something positive in their mind, and defending it, as Biden does, may not sound unreasonable.

The ACA is also synonymous with President Barack Obama, and given his popularity — 91% of Democrats viewed Obama favorably in Gallup’s most recent reading — it’s understandable that Democrats would want to support his signature policy achievement.

It’s possible that progressives’ call for scrapping the ACA may have offended Obama’s fan base in the party, particularly blacks.

What do the data suggest?

Gallup reviewed black Democrats’ views of the ACA using combined data from 2016, 2017 and 2018. This shows black Democrats are significantly more likely than white Democrats to want to keep the ACA intact: 42% vs. 23%, respectively.

Taking these findings together, black Democrats appear to be as amenable as white Democrats to “Medicare for All” types of proposals, but they may be less open than whites to dismantling the ACA.

More broadly, while the Democratic candidates are arguing over healthcare policy like their political futures depend on it, rank-and-file Democrats may like much of what they hear from all of the candidates, and therefore be more focused on who is the better messenger to face President Trump than on the specific policies they are espousing.

Read More:  Health Care in the US Should Be Affordable and Accessible - The Nation