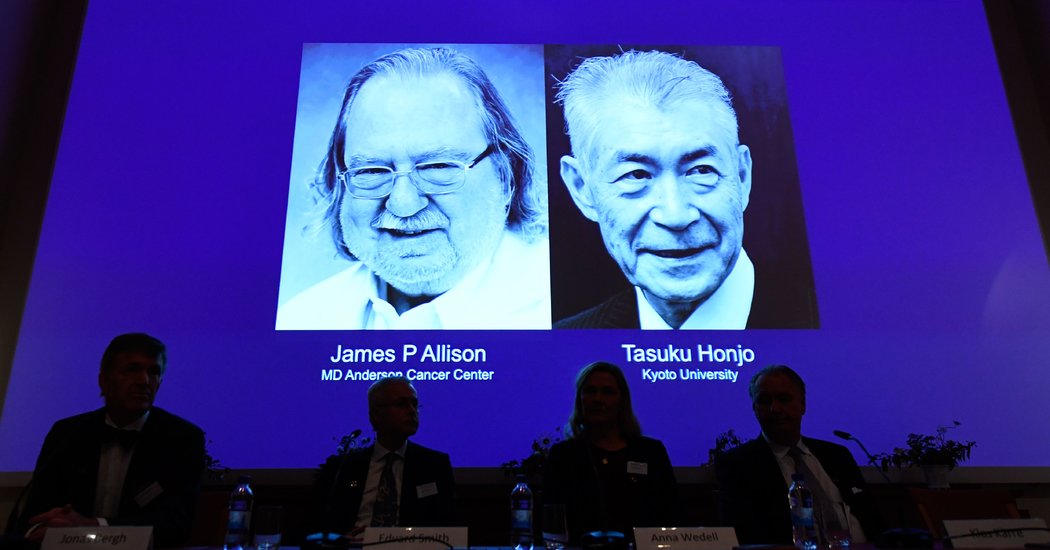 The Nobel Prize in Physiology or Medicine was awarded on Monday to James P. Allison of the United States and Tasuku Honjo of Japan for their work on unleashing the body’s immune system to attack cancer, a breakthrough that has led to an entirely new class of drugs and brought lasting remissions to many patients who had run out of options.

Their success, which came after many researchers had given up on the idea, “brought immunotherapy out from decades of skepticism,” said Dr. Jedd Wolchok, a cancer specialist at Memorial Sloan Kettering Cancer Center in New York. It has, he said, “led to human applications that have affected an untold number of people’s health.”

Before Dr. Allison’s and Dr. Honjo’s discoveries, cancer treatment consisted of surgery, radiation, chemotherapy and hormonal treatments. A statement from the Nobel committee hailed their accomplishments as establishing “an entirely new principle for cancer therapy.”

The drugs based on their work belong to a class called checkpoint inhibitors, with tongue-twisting names that have nonetheless become familiar to many patients. The first ones approved were ipilimumab (brand name Yervoy), nivolumab (Opdivo) and pembrolizumab (Keytruda). Others have since come to market.

Earlier attempts by other researchers to recruit the immune system to fight cancer sometimes worked but more often did not. Dr. Allison and Dr. Honjo succeeded where others had failed by deciphering exactly how cells were interacting so they could fine-tune methods to control the immune system.

Checkpoint inhibitors do not work for everyone and they have only been approved for some cancers. They can have severe side effects, and they are expensive, costing more than $ 100,000 a year. But the approach, known as immunotherapy, has become a mainstay of treatment for a number of types of cancer, and a great deal of research is underway — including work by Dr. Allison and Dr. Honjo — to find the best ways of combining checkpoint inhibitors with one another and with standard treatments to help more patients.

The checkpoint inhibitors now on the market are used for cancers of the lung, kidney, bladder, head and neck; for the aggressive skin cancer melanoma; and for Hodgkin lymphoma and other cancers.

Dr. Honjo, 76, is a longtime professor at Kyoto University, where he did his landmark work. Previously, he did research at Osaka University, the University of Tokyo and the National Institutes of Health in Washington.

“When I’m thanked by patients who recover, I truly feel the significance of our research,” Dr. Honjo said during a news conference at the Japanese university, according to Japanese news reports. He added: “I’d like to continue researching cancer for a while so that this immunotherapy will help save more cancer patients than ever before.”

In a telephone interview, Dr. Allison said that when checkpoint inhibitors work, patients “are good to go for a decade or more.” He said he was working with other researchers, including his wife, Dr. Padmanee Sharma, an oncologist at MD Anderson, to understand the mechanisms so the treatments would help more patients.

“It’s a big challenge,” Dr. Allison said. “But we know the basic rules now. It’s just a matter of more hard work to put things together based on science.”

Dr. Allison said he first heard about the prize via calls and texts from family, friends and colleagues who had seen news reports, before the Nobel committee could reach him. He was in New York, and the committee did not have his cellphone number.

Dr. Allison and Dr. Honjo, working separately, showed in the 1990s how certain proteins act as “brakes” on the immune system’s T-cells and limit their ability to attack cancer cells. Suppressing those proteins, they theorized, could transform the body’s ability to fight cancer.

Read More:  What diet are diabetics on

T-cells, a type of white blood cell, are sometimes called the soldiers of the immune system. They are deployed to fight infections and cancer, but malignant cells can elude them. The T-cells carry molecules called checkpoints, that the body uses to shut the cells down when it needs to stop them. Cancer cells can lock onto those checkpoints, crippling the T-cells and preventing them from fighting the disease.

Dr. Allison identified a checkpoint called CTLA-4. Dr. Honjo found a different one, called PD-1. Those discoveries made it possible to develop drugs that would stop the checkpoints from working, so that the T-cells would be free to fight cancer. The process is often referred to as taking the brakes off the immune system.

Ipilimumab was based on Dr. Allison’s work on the checkpoint CTLA-4. The later drugs work on PD-1.

Former President Jimmy Carter received a checkpoint inhibitor, Keytruda, in 2015 when melanoma had spread to his brain and liver. His last scan, in June, showed no cancer, an aide said.

A study published in August found that combining Yervoy and Opdivo significantly prolonged life for people in a desperate situation, with melanoma that had spread to the brain.

But for all their successes, the danger is that these treatments can also turn the fury of the immune system against the patient’s own tissue, leading to side effects that can be severe.

The lungs, intestines and sometimes even the heart have become inflamed. The thyroid gland can turn sluggish. Damage to the pancreas has caused diabetes in some patients. Others have developed rheumatoid arthritis. When the drugs were first introduced, side effects even caused some deaths.

Doctors have learned to better control the problems. Overall, the side effects from ipilimumab, or Yervoy, are considered worse than those from the other checkpoint inhibitors.

Describing the two researchers, Dr. Wolchok, a melanoma specialist who has worked with Dr. Allison, said: “They were basic scientists who were intrigued with the ways in which these mysterious T-cells behaved. They dug deeply to understand biologic pathways.”

Dr. Wolchok treated some of the patients with advanced melanoma who were among the first to receive the drug based on Dr. Allison’s work. Dr. Allison is not a physician, and does not work directly with patients. One day in 2006, Dr. Wolchok called him and insisted that he leave his lab and head to the clinic.

There, Dr. Wolchok introduced him to a young woman who had been near death from melanoma, and who was now completely free of the disease — after only four doses of the drug Dr. Allison had developed. Dr. Allison wept.

Dr. Wolchok noted that although Dr. Allison’s and Dr. Honjo’s discoveries are based on the same idea, they involve separate braking mechanisms in the immune system.

“These two pathways are very different,” he said. “That’s good. They’re non-redundant. If patients don’t have the desired outcome from one we can use the other one. It speaks to the multiple different molecular brakes that exist to keep this powerful set of cells and organs that we call the immune system under control.”

A version of this article appears in print on , on Page A7 of the New York edition with the headline: Scientists Who Found New Weapon in War on Cancer. Order Reprints | Today’s Paper | Subscribe