Dietitians, opticians and other non-essential NHS staff were today branded ‘cynical’ for asking for a pre-Christmas pay rise during the coronavirus pandemic.

Boris Johnson has promised a salary bump to doctors, nurses and other workers who have been fighting coronavirus on the front lines by next April.

There has been widespread public support for the move in part because more than 600 of them lost their lives battling the disease during the first wave.

However, 14 health unions have written to the Prime Minister calling for a pay rise for 1.3million NHS staff next month, warning that thousands of medics could leave unless the ‘right decision’ is made. The unions demanding action include the British Dietetic Association, British Orthoptic Society, Chartered Society of Physiotherapy and College of Podiatry.

The Institute of Economic Affairs think-tank today slammed these groups for being opportunistic and trying to piggyback on the public support for frontline workers, who’ve bore the brunt of the UK’s crisis.

Almost all NHS services were cancelled during the first lockdown in spring to protect the health service and most are still operating at extremely limited capacity due to heightened infection control and social distancing guidelines. It means some non-essential NHS workers have been left twiddling their thumbs for the better part of the year.

It’s true that many nonessential staff were redeployed to help first the first wave as wards became overrun with Covid-19 patients. But hospitals were only busy for a couple of months and remained much emptier than normal for the majority of the year.

And the economic fallout from the Covid-19 pandemic has fallen almost entirely on the shoulders of the private sector, with almost 10million Brits furloughed, many of whom will eventually be made redundant.

Christopher Snowdon, head of lifestyle economics at the IEA, told MailOnline not only was it ‘cynical’ that non-frontline staff were trying to demand a pay rise, it was also ‘economically impossible’ in the current climate.

Mr Snowdon added that although at certain points ‘this has been the busiest time ever for the NHS’, for large parts of the year it has also ‘been the quietest, even for nurses’. 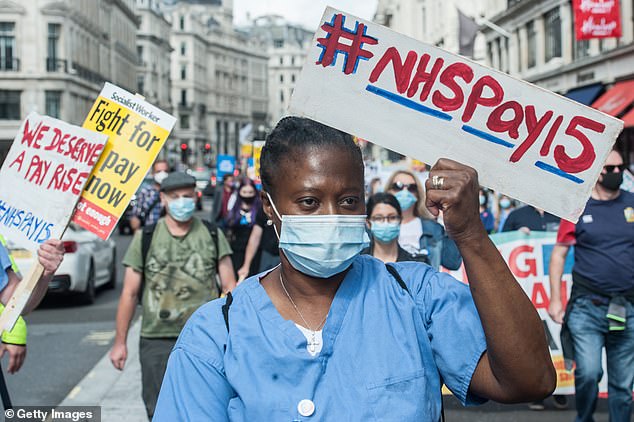 The fourteen unions have warned NHS staff could quit in droves if the PM doesn’t bump up their salaries heading into the deep winter months, when Covid-19 hospital cases are expected to soar.

In their letter today, they wrote: ‘They feel stressed, burned out and fearful. It is increasingly unrealistic to ask them to carry on regardless.

‘The pandemic has affected staff profoundly and many may not stay around when the job is done. 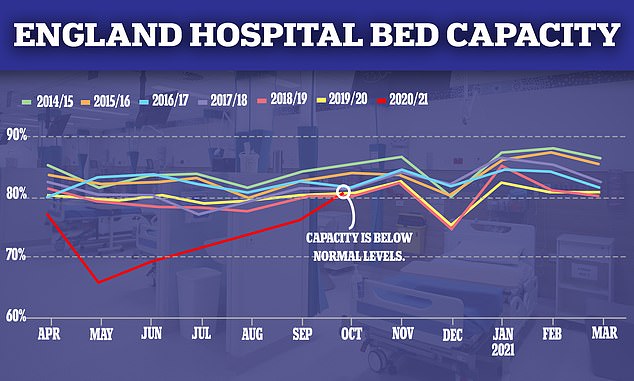 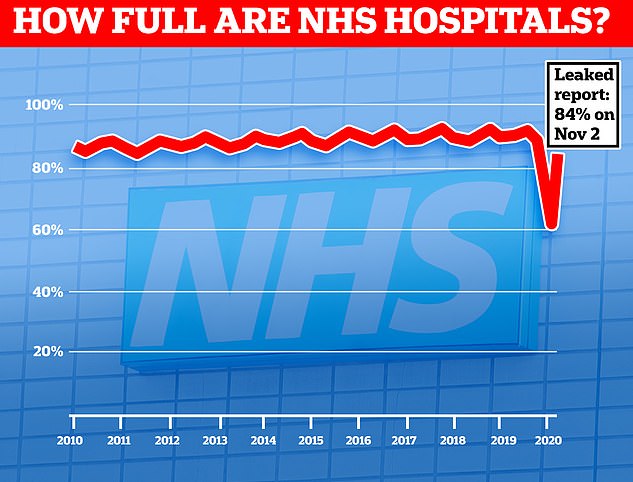 Is Rishi Sunak propping up firms that would have failed WITHOUT Covid? Number of businesses going bust FALLS almost 40 per cent year on year

Rishi Sunak was accused of propping up failing businesses with taxpayers money today amid figures showing a dramatic decline in insolvencies during the coronavirus pandemic.

The Chancellor has ploughed billions into securing the jobs of millions of workers through furlough payments and schemes underwriting business loans for thousands of firms.

Read More:  How to Use a Neti Pot Sinus Rinse

But the Government’s Insolvency Service (IS) shows that the number of firms going bust in the third quarter of 2020 was 39 per cent down on the same period in 2019, before the coronavirus pandemic struck. 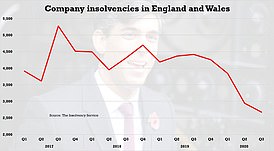 The agency said that several steps taken by the chancellor, including financial relief and orders for the legal system to go easy on struggling firms, have had an affect on the numbers.

Former minister Sir Desmond Swayne said the figures suggested natural failures of businesses were being prevented by the government ‘at huge expense’.

‘If they are not viable, and many businesses will not have been viable, that is an enormous bill that we are all going to have to repay over a long period of time. Best we get on with it,’ the Tory MP told MailOnline.

Mr Sunak’s announcements last week – including an extension until March 31 of the costly furlough job protection scheme – look set to cost more than 30 billion pounds, on top of his huge spending increases and tax cuts earlier this year.

British government debt has surpassed 2 trillion pounds, or 103.5 per cent of gross domestic product, its highest since 1960 when the country was still recovering from heavy spending during World War Two.

Annual borrowing looks set to hit 400 billion pounds for its highest share of GDP since the war at around 20 per cent of GDP.

Mr Sunak said his support was worth more than 200 billion pounds before the new measures, but this included loan guarantees and tax deferrals which only count as spending once statisticians judge them unlikely to be repaid.

Britain’s Office for Budget Responsibility is due to publish new estimates of the cost of the rescue plan on Nov. 25.

In another extraordinary policy shift set to cost the government £40billion and slammed as ‘wasteful and poorly targeted’ by experts, the Chancellor admitted the recovery had ‘slowed’ and businesses now faced ‘uncertainty’ stretching into next year.

The move raised fears that the country is in for a longer haul than ministers have been admitting, as the blanket lockdown in England is due to lift on December 2.

Workers will now be able to get furlough at 80 per cent of their usual wage until the end of March, up to a ceiling of £2,500 a month, with employers only having to contribute national insurance and pension costs.

In a Commons statement, Mr Sunak also confirmed that grants for the self-employed will be paid at 80 per cent of average previous profits for November to January, rather than 40 per cent.

But in a report on the third quarter of 2020 at the end of October, before he extended the furlough again, The Insolvency Service said that his interventions on the economy were impacting on insolvencies.

It said a 9 per cent quarter-on-quarter fall had been driven by a fall in Creditors’ Voluntary Liquidation (CVL), where the directors of a company deliberately shut it down.

‘Raising pay this year could persuade them to change their minds and prove attractive to thousands of much-needed potential NHS recruits.

‘Times may be tough but you know morally this is the right decision to take.’

There is no doubt NHS staff fighting Covid-19 have gone above and beyond their duty, hundreds of which paid the ultimate price with their lives.

Their efforts were recognised by the entire country which committed to a ‘weekly’ clap for frontline staff to show their gratitude.

But when it comes to giving them a pay rise, there are concerns about where the Government will be able to cobble together the cash.

Mr Snowdon told MailOnline: ‘I think emotionally people can see doctors and nurses at times this year in various parts of country have been extremely busy and extremely stressed – whereas presumably opticians and dietitians haven’t been.

‘The case for giving non-frontline medics a pay rise is even weaker than it is for other medics [doctors, nurses etc].

‘I would say it’s a little bit cynical from them [opticians, dietitians and other nonessential health workers] to use it as an opportunity to lobby for a pay rise.’

He added: ‘Unfortunately, the economic reality is we can’t afford to give anyone a pay rise – the economy is going to be down 10 per cent by this year.

‘We’ve gone back 15 years or so in terms of economic resources, and if the economy shrinks by 10 per cent then [theoretically] you need to shrink public wages by 10 per cent.

‘The country as a whole has made enormous sacrifices this year – millions have lost their jobs and an even greater number have taken pay-cuts.

‘It not only strikes me as unfair but it is economically impossible.’

On health unions threatening workers could quit in droves if their pay demands are not met, Mr Snowdon said: ‘If you’re going to push economy back 10 years, I don’t know how realistic it is that people are going to quit – or where they think they’re going to go.

UNISON’ head of health Sara Gorton told the Daily Mirror: ‘The NHS can’t run without its staff. They all deserve better from porters to nurses.

‘Their dedication during the pandemic has been humbling. But no one is superhuman and many are feeling the strain.

‘Boris Johnson must show he has a heart with a pay rise before Christmas.

‘It will boost exhausted staff going into the second wave and help the NHS attract much-needed new recruits.’

Hannah Reed, national officer at the Royal College of Nursing, said: ‘NHS staff have been underpaid for years and there has never been a more critical time for the Government to address this.

‘Paying staff fairly will show that they are valued and begin to turn the corner on the record nursing and wider vacancy levels.

‘The NHS is facing an extremely challenging few months due to the combination of Covid-19 and winter pressures. Without urgent action on pay, vacancies across the NHS will continue to increase.’

Read More:  5 Tips for Hiring Staff for Your Marijuana Business

A spokeswoman for the Department of Health and Social Care said: ‘We are grateful for the hard work and dedication of our frontline staff, particularly during the pandemic.

‘NHS staff benefit from the final year of a three-year pay deal, agreed with trade unions, which has delivered year-on-year pay increases. The independent NHS Pay Review Body makes recommendations to Government on pay increases for NHS staff and we will consider their advice when we receive it.’

It comes after nurses marched through Trafalgar Square in London demanding better wages in September.

Campaigners – many of which protested with fake blood splattered across their NHS scrubs – marched after a two-minute silence in honour of the 640 healthcare workers who died during the pandemic.

The protest comes after nurses were excluded from the wage increase for around 900,000 public sector workers announced in July.

Chancellor Rishi Sunak unveiled salary increases which included doctors and dentists seeing their pay rise by 2.8 per cent – more than three times the rate of inflation – in recognition of their ‘efforts on the frontline’.

The largest increase of 3.1 per cent was being reserved for teachers despite the fact they have not been teaching full class sizes for months.

But nurses saw no extra rise at the time because they were in the last year of a three-year pay deal which saw many in the profession receive a pay hike of 4.4 per cent.

HOW BUSY IS THE NHS?

Rising hospital admissions from Covid-19 have triggered fears that the NHS could become overwhelmed by the second wave of coronavirus.

But there is no official data to show how busy hospitals actually are.

A report leaked to the Health Service Journal last week suggested inpatient beds are 84 per cent full, which is lower than the 92 per cent recorded during autumn last year.

The figure suggests that the health service as a whole is not under as much strain as officials imply.

Bed occupancy has not averaged lower than 85 per cent in any normal three-month period for the past decade.

Regional differences in the coronavirus outbreak mean some places are feeling more strain than others – one major hospital trust in Liverpool is already treating more Covid-19 patients than it was in the spring.

Officials are making repeated comparisons to the spring situation as a shorthand for crisis but will not explain how busy hospitals actually are.

Tens of thousands of beds went unused during the peak of the first wave of Covid-19 and officials and officials say the ‘available capacity’ of hospitals is only around 20,000, prompting startling warnings they could run out of room by next month.

The North West Nightingale hospital in Manchester is the only one of the NHS’s overflow hospitals to have opened so far during the Covid resurgence, and it is being used for rehab to free up space on other wards in the city.

Here is how Covid-19 patients were distributed across regional hospitals on Saturday, November 7 (most recent data):