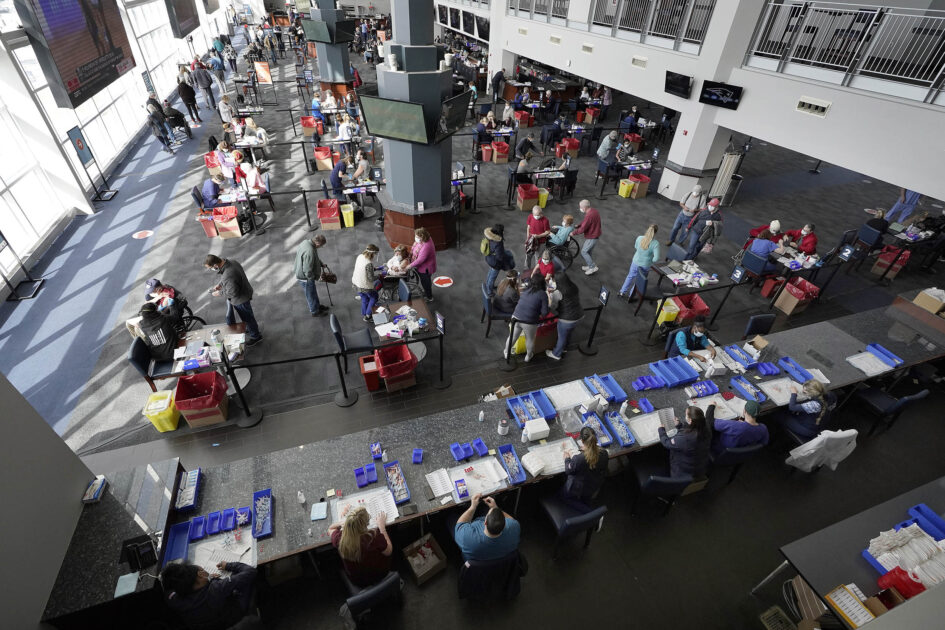 More infectious COVID-19 variants are spreading in the U.S. at the same time as cases are falling and the national vaccination campaign is picking up steam. Put it all together, a Harvard epidemiologist said Friday, and it may all add up to a lucky break for us, and we may be spared a surge from a viral mutation, such as the one that threatened to topple the U.K. health care system.

William Hanage, associate professor of epidemiology at the Harvard T.H. Chan School of Public Health, said though the highly infectious U.K. variant, known as B.1.1.7, had devastating effects in Britain, Ireland, and other nations, that may not happen here even though it has been found in 42 states and is thought to be 35 to 45 percent more infectious than the original viral variant.

That’s because it arrived here later than it did in other nations and is spreading at a time when U.S. cases have begun declining rapidly. Though scientists are struggling to understand the recent decline — new daily cases nationally have fallen from over 300,000 in early January to just 69,165 on Feb. 17 — Hanage, who spoke with the media on a conference call Friday morning, said three factors may have something to do with it. First, he said, is seasonality. Though mid-February remains the depths of winter, ordinary cold-causing coronaviruses are known to peak in January. Why that is remains unclear, he said, and both behavioral and weather conditions may have something to do with it. Regardless, this virus may be behaving as its close cousins.

Hanage cautioned that seasonality doesn’t work the same during a pandemic as it does during more ordinary times, and transmission is unlikely to cease entirely. Even with the common cold, he said, “summer colds” are not unknown.

Second, he said, is that the population is gaining immunity, albeit slowly. It’s possible, he said, that places that had large outbreaks earlier in the pandemic have enough immune individuals to dampen spread to the noninfected, but the size of that effect would vary from place to place.

Third, he said, is that people may have altered their behavior as the virus peaked, being more diligent about masking and hand washing, and staying home instead of going to bars and restaurants. That shift would manifest itself weeks later, as the pipeline of infected individuals getting sick enough to exhibit symptoms and go to the hospital shrinks.

Layered over that, Hanage said is a nationwide vaccination campaign that is gaining steam — by Thursday, 41 million had received at least one dose, according to the Centers for Disease Control and Prevention (CDC). And President Joe Biden has pledged to deliver 150 million doses in his first 100 days in office.

“Taken together it may mean the point at which this variant, B.1.1.7, is becoming locally common is the part of the year when it doesn’t transmit quite as well or a high proportion of people are vaccinated,” Hanage said.

That makes for a lot of moving parts, Hanage said, but what it may mean is that the variants’ U.S. spread will be less like the surge that washed across the U.K. and more similar to that of the original virus here, with regional COVID-19 surges due to the variant that are highly dependent on local conditions, such as adherence to public health guidelines, past pandemic experience, and regional weather, like last summer’s heat wave that drove people indoors across the South and coincided with cases rising across the Sun Belt.

“I don’t think there’s going to be a definitive national surge, at least not in the next few months, but there may be locally significant events,” Hanage said. “And how local they are and the extent to which they spread will depend very much upon what we do.”