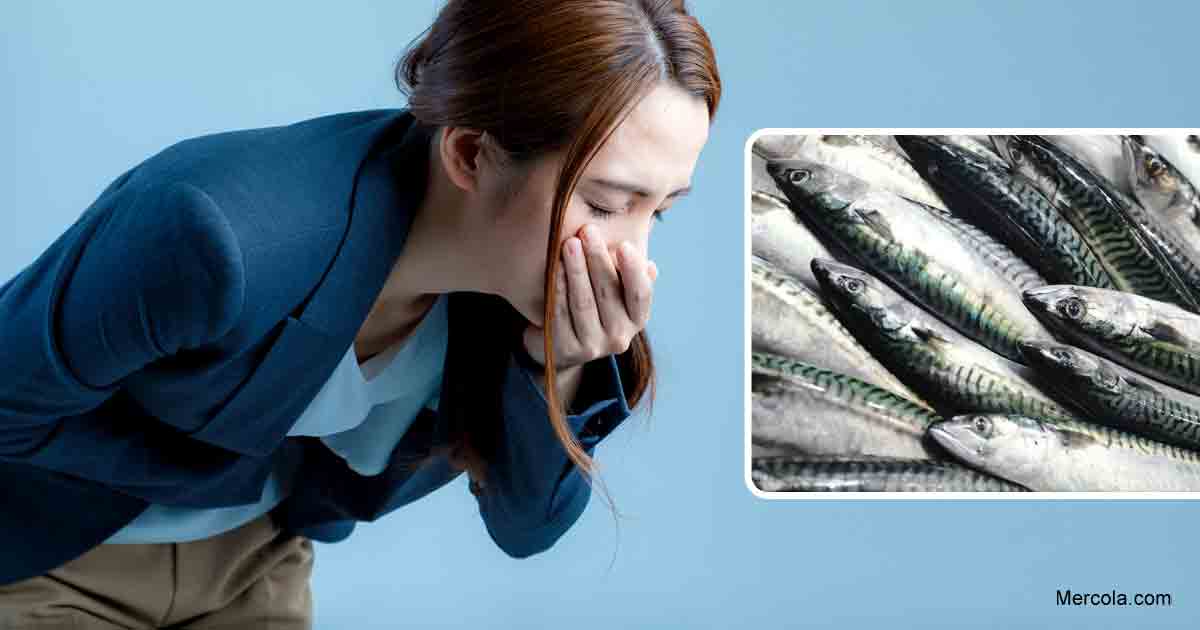 A true Immunoglobulin-E (IgE) mediated allergic reaction to finned fish may be life-threatening, as it can trigger anaphylactic shock. According to the American College of Allergy, Asthma and Immunology,2 symptoms of finned fish allergies don’t usually appear until adulthood, and include hives, nausea and vomiting, headaches, wheezing and upper respiratory congestion.

However, a recent review of fish allergies in Emergency Medicine News3 reveals many of the same symptoms result from a different process taking place in the fish, and relates to how it was handled and processed after being caught.

Process of Preserving Fish May Increase Your Risk of Reaction

Not every report of abdominal pain, nausea and vomiting, headache and hives 20 to 30 minutes after eating fish are the result of a classic diagnosis of seafood allergy. Although the symptoms may resolve with basic treatment commonly used for an acute allergic reaction, they instead may have been caused by an excess amount of histamine in the fish,4 known as scombroid poisoning.

As fish consumption has increased over the past three to four decades, so has the number of histamine fish poisonings. Scombroid poisoning is reported throughout the world and outbreaks occur when a number of individuals are affected from the same source. Although the illness is uncomfortable, to date, no deaths have been reported in the U.S.5

The poisoning is the result of histamine in the flesh of the fish, and is usually self-limited and of short duration. Although many of the symptoms are very similar to an allergic reaction, occasionally sufferers may also experience hypotension (low blood pressure), bronchospasms and respiratory distress.

Since the symptoms are similar to those of an allergic reaction, it is often misdiagnosed as a true IgE-mediated allergy. Interestingly, the review estimates scombroid poisoning may be responsible for up to 40 percent of finned fish seafood allergic reactions occurring in clusters.6

In some cases, the sufferer reports the fish tasted peppery, or that there was a burning sensation in the mouth. Otherwise, the fish will smell or appear fresh and there are no reliable outward signs the fish is not safe to eat.

Reports of scombroid poisoning started in 1968, but histamine was not proven to be the culprit until 1991. Previously, it was believed histamine ingested orally could not be absorbed through the gut in sufficient amounts to trigger symptoms.

In a true allergic reaction, your immune system overreacts to a protein by producing IgE antibodies. These travel to mast cells causing them to release chemicals that trigger symptoms in the nose, lungs, throat or on the skin. One of these chemicals is histamine.

During scombroid poisoning, your body is not producing the histamine, but is rather poisoned by the amount of histamine in the flesh of the fish. Bacteria normally inside of these fish, including Escherichia coli, Proteus, Klebsiella, Clostridium and Salmonella, contain an enzyme that converts histidine to histamine.

Histidine is an amino acid and part of most proteins. It is also the source from which histamine is derived in the body. The exact type and composition of the bacteria found in the fish will depend upon the geographic location, feeding habits and the handling process once the fish is caught.

The bacteria are unable to convert histidine to histamine when the fish is kept at a temperature of 32 degrees Fahrenheit (0 degrees Celcius) or lower. The enzyme, histidine decarboxylase, is inactivated at these temperatures.

However, when the fish is stored at temperatures above 68 F (20 C), it only takes a few hours for enough histamine to be created to cause problems. The histamine is resistant to cooking, smoking, freezing, canning and any subsequent refrigeration.

The Role Histamine Plays In Your Symptoms

One of the common ways of stopping symptoms of scombroid poisoning is to administer antihistamines, which block the action of histamines in the body. Normally histamines are released by mast cells as part of your immune response. Your body also has a system to degrade histamine once it has done its job.

However, some experience a lack of degradation of histamine. This may be the result of a genetic single nucleotide polymorphism (SNP) — pronounced “snip.” These are small genetic variations occurring in more than 1 percent of the population.7

Another type of food poisoning from fish that looks and smells fresh is ciguatera poisoning. Contaminated algae blooms located along a coral reef are eaten by smaller herbivorous fish, and the poisoning then accumulates up the food chain.9

Most get better in a few days, but some experience symptoms lasting for months or even years.11 It is one of the most commonly reported marine toxins in the world, and is associated with contaminated reef fish such as Barracuda, grouper and snapper. Since contaminated fish have no specific odor, color or taste, it makes identification of potential contamination extremely difficult.12

Clinical diagnosis is often based on a constellation of symptoms related to ingestion of specific products. Symptoms increase in frequency and severity over the first six hours following the initial symptom. Affected major organ systems are the gastrointestinal tract (GI), nervous system and cardiovascular system. GI symptoms include abdominal pain, nausea vomiting and diarrhea.

Read More:  Questioning ‘the Newer the Better’ for Blood Transfusions

Cardiovascular symptoms may include a slower heart rate and pulmonary edema. Management is largely supportive and driven by symptoms as there is no specific treatment for the toxin itself. Although many of the poisonings occur in tropical and subtropical areas, it occurs anywhere these fish are shipped for food.

There’s no specific prevention except to limit tropical fish consumption, such as grouper, barracuda, snapper, mackerel and triggerfish, to those that are 4 to 6 pounds, as it is believed they are not large enough to have accumulated enough toxins to make you sick.14

Farmed Fish Not the Answer

In your pursuit of healthy omega-3 fats and in an effort to avoid scombroid poisoning from fish improperly stored after fishing, you may be tempted to eat farmed fish such as salmon, renowned for its high omega-3 content. However you might be surprised to find farmed salmon has more in common with junk food than health food.

In a global assessment of farmed salmon, researchers found 13 persistent organic pollutants.15 Farmed salmon also does not have the nutritional profile of wild-caught Alaskan salmon.

Half a fillet of wild Atlantic salmon contains about 3,996 milligrams (mg) of omega-3 and 341 mg of omega-6.16 Half a fillet of farmed salmon from the Atlantic contains just a bit more omega-3 — 4,961 mg — but an astounding 1,944 mg of omega-6;17 more than 5.5 times more than wild salmon, which further skews rather than corrects most people’s omega-3 to omega-6 ratio.

Aquaculture (fish farms) is promoted as a sustainable solution to overfishing, but in reality creates more problems. For instance, 20 percent of wild-caught fish are ground into fish meal to feed farmed fish, so the industry is contributing heavily to the depletion of wild fish rather than saving it.18

Overcrowded conditions on a salmon farm also leads to fish plagued with rapidly spreading diseases. Kurt Oddekalv, a respected Norwegian environmental activist, warns a number of dangerous pesticides are used to prevent disease-causing pests, one of which is known to have neurotoxic effects on the workers who apply it. Yet it is dumped directly into the water.

Farmed salmon suffer equally disturbing mutations, although less visible. The flesh of farm salmon is brittle and easily breaks apart, a highly abnormal feature. Farmed salmon also contain higher levels of contaminants than those fish found in the wild, in part because of their elevated fat content.21

How to Reduce Your Risk of Poisoning

Wild-caught Alaskan salmon, herring and anchovies are generally safer fish options than others as they contain less pollutants, contaminants and are less likely to carry scombroid or ciguatera poisoning, while still delivering animal-based omega-3 fats necessary for optimal health. The following suggestions may also help you make your choices:

• Prevent scombroid — The best way to protect yourself against the production of histamine in finned seafood is to ensure it was processed appropriately after being caught. This is especially important when eating mahi-mahi, salmon or tuna. Histidine conversion to histamine through bacterial enzymatic action occurs if the fish are not immediately frozen at 32 F (0 C) or below.

Report any reaction to seafood you’ve eaten at a restaurant or purchased from the store to your local health department and the facility you purchased it from. When multiple people experience reactions, the seafood should be pulled from public consumption.

• Prevent ciguatera — This toxin bioaccumulates up the food chain, originating in smaller herbivorous fish feeding along a coral reef, as they are eaten by larger carnivorous fish.

The toxin occurs in fish found in the tropics and subtropics, some of which may be shipped around the world, including barracuda, grouper and snapper. It’s not possible to determine which fish are contaminated, but eating fish smaller than 6 pounds may reduce your risk of getting sick.

• Avoid farmed fish — Wild-caught Alaskan sockeye salmon have a shorter life span and are less likely to be contaminated with environmental pollutants. Don’t confuse this fish with Atlantic caught salmon as Alaskan salmon are not allowed to be farmed. Canned Alaskan salmon is a less expensive alternative.

Other fish containing lower levels of environmental contaminants are small fish with short life cycles, such as herring, sardines and anchovies. Just be sure these are not fished from the Baltic Sea as it is exceptionally polluted.