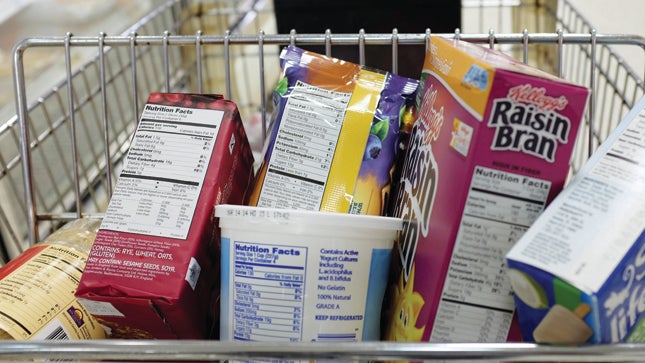 Do you know what you are eating? If you’ve looked at the back of a food package recently, you may have noticed that the Nutrition Facts label looks different. Calories are bigger and bolder. The serving size is more visible and more accurately reflects the amount people eat. There is also a new line for added sugars, along with a percent daily value that specifies how much of the day’s added sugar limit is in a serving. This is the U.S. Food and Drug Administration (FDA) helping you to make informed and wise choices for the health of you and your family.

It has been three years since the FDA first announced these updates. As of January 1, 2020, nearly all packaged foods and beverages made by large manufacturers must comply with the new requirements. Smaller companies have an additional year to transition. The label changes are a win for consumers, a win for public health and even a win for bipartisanship. They were mandated as a result of bipartisan efforts spanning both Democratic and Republican administrations. When bipartisanship works, consumers win.

The updated Nutrition Facts label will make it easier for consumers to make more informed food choices. Surveys show consumers are seeking healthier options and looking to consume less sugar. The bigger, bolder calorie information on the new label facilitates healthier choices and can help to address the challenge that one in five children and two in five adults are obese, putting them at risk for serious and costly diseases including heart disease, stroke, diabetes and some cancers.

For the first time ever, consumers will be able to distinguish between naturally-occurring sugars and those that are “added” during packaging or processing. Prior to the label update, it would have been impossible to know the difference in foods like yogurt, trail mix or granola bars. This new knowledge is critical because consuming large amounts of “added” sugars can increase the risk for obesity, heart disease and type 2 diabetes.

The updated Nutrition Facts label will not only help to prevent disease but also help reduce health care costs. A recent study found that informing consumers of added sugars on the label could eliminate nearly one million cases of heart disease, stroke and type 2 diabetes combined over 20 years. Additionally, if food companies reduced added sugars in their products in response to the new labeling requirement, up to three million cases could be prevented. Reducing chronic diseases by changing consumer behaviors could also result in $ 31 billion savings in health care costs over two decades. That’s an average savings of more than $ 1.5 billion per year — 30 percent more than the Centers for Disease Control and Prevention spent on preventing costly chronic diseases last fiscal year.

These important changes would not be happening were it not for actions by multiple administrations — a rare display of bipartisanship in an otherwise partisan era. The Nutrition Facts label was first required to be on food packages by a 1990 law signed by President George H.W. Bush. The requirement took effect in 1994, during the Clinton administration. Minor changes were made to add trans fat to the label during the George W. Bush administration.

Then, in 2014, the Obama administration proposed overhauling the label to bring it in line with current nutrition science. While these changes were rolled out by former First Lady Michelle Obama in 2016, the Trump administration’s FDA has made implementing the label a priority. In March 2018, FDA officials  announced their Nutrition Innovation Strategy, focused on reducing preventable disease and death caused by poor nutrition. One of the five key pillars of the strategy is implementing the updated Nutrition Facts label and menu labeling in restaurants and other retailers, another Obama administration policy.

Read More:  6 Exercises to Take Negative Stress off Your Feet

While the Trump administration changed the compliance date to give food companies additional time, the FDA has remained committed to ensuring the updated label appears on food packages and helps people make more informed choices. They are even offering educational resources on how to use the new label and working with other organizations to promote it to consumers.

As we begin the new year and make resolutions regarding our personal health, we have a little more help with a user-friendly Nutrition Facts label on the foods and drinks we enjoy. We will finally know how much added sugar is included in products, be better able to see the number of calories and have serving sizes that better reflect actual portion sizes. These new guidelines are essential to tackling the health challenges faced by every American.

When government puts politics aside for the benefit of consumers and public health, everyone wins. Now look at your labels.

Dr. Karen DeSalvo is chief health officer at Google Health. She served as acting assistant secretary for health in the Obama administration from 2014 to 2017 and New Orleans health commissioner from 2011 to 2014. Dr. Andrew C. von Eschenbach serves as the president of Samaritan Health Initiatives, Inc. He served as FDA commissioner from 2006 to 2009 and director of the National Cancer Institute from 2002 to 2006 in the George W. Bush administration. They both serve as Bipartisan Policy Center senior fellows.