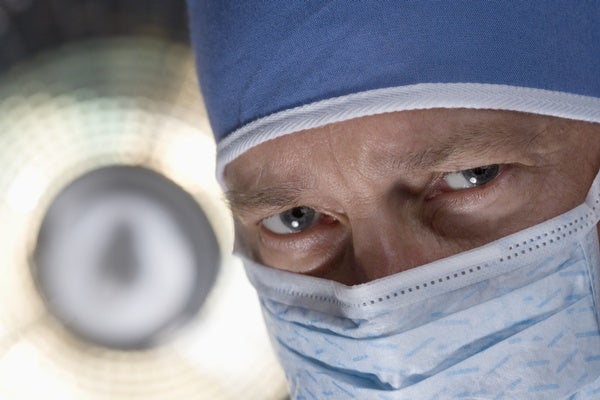 In January 2016 a powerful white male doctor sexually assaulted a black female patient at one of the most prestigious academic hospitals in the U.S. It happened right in the emergency room, a place she came to hoping for care, and initially no one believed her. When semen analysis showed that she was, in fact, right—that this doctor had indeed drugged her and proceeded to ejaculate on her—many questioned how this could have been possible.

The doctor in question was a nationally recognized star in his field. A friend of mine happened to be in medical training at that institution when the assault occurred, and he, too, was shocked. “What was he like?” I asked. “He was incredible,” my friend said. “Every resident liked working with him. He expected a lot from you, but he was an all-star. You were always excited when you saw that he was on service.”

For most, this would seem all the more surprising. But I had to think that perhaps it was not. Perhaps his power, prestige and sense of invincibility were all factors that actually made him feel like he could get away with exploiting others. The U.S. has many such cases of abuse—sexual and other types—and the National Health Service in the U.K. has reported a similar problem with doctors who have “superhero status.”

The reality is that this abuse is not limited to superstar doctors—every doctor, by virtue of being in a position of relative power, runs the risk of misusing it. The superstar cases may be the ones that make the news, but I fear they are the tip of the iceberg.

We know that power in medicine, created and perpetuated by outdated hierarchies, has led to abuse not only of patients, but of medical students, staff and other health care professionals. In a systematic review, it was found that more than a third of medical trainees had experienced some form of harassment or discrimination from more senior doctors. And within this specific case, we can see a number of unfortunate undertones: the gender dynamics, the racial inequities, the quick reflex to dismiss the patient as having mental health issues or trying to “get back” at the doctor. And we are left with a terrible incident that is representative of many of the things that are wrong with modern medicine.

We have a serious power problem in academic medicine. We have too many doctors with too much power and too little oversight to keep that power in check. While any doctor could harm a patient or colleague, those who are exceptional in their fields are likely to be more immune to consequences. Many of these so-called superheroes have achieved astronomical success and fame, some through biomedical research, others as policy scholars, writers, media personalities—the résumés are endless. My own institution, affiliated with Harvard Medical School, produces a large number of academic stars.

But as doctors become more powerful, do they move further away from the qualities that we would want in our own doctor? That is to say, are our field’s most prestigious personalities necessarily the ones you would want taking care of you or your family member?

I previously wrote about how the design of our medical system dehumanizes patients. But does the potential for power built into our academic medical enterprise dehumanize doctors as well? Patients come for help—they inherently admit vulnerability and seek care. But do some doctors instead see someone who is weak and exploitable? While in the U.S., this mistreatment commonly takes more subtle forms—microaggressions being a notable manifestation— elsewhere, it can be more explicit.

In undercover reporting from 2015, a journalist noted that in Indian delivery rooms, particularly those treating poor patients, it was actually common practice to slap patients. As a global health doctor, I have worked in Central America, sub-Saharan Africa and Southeast Asia—and I have noticed similar dichotomies of power and perpetuation of abuse between doctors and patients in almost every setting.

Read More:  Male Dysfunction – When the Problem is all in the Head

If doctors have the potential to become abusive, why do they do so, and how might we stop it? Some have pointed to the growing epidemic of burnout and depression among medical trainees as a contributor. In one study, researchers found that medical students who were more “burned out” were more likely to behave unprofessionally and less likely to hold altruistic views on taking care of patients, especially underserved ones. Another study that looked at Turkey reported that between the first and third years of medical school, students became significantly less empathetic. A myriad of solutions to address burnout have been suggested elsewhere—here may be one more reason to adopt them quickly.

Another reason may be that we aren’t selecting the right type of people to be doctors. In the U. S., medical admissions systems are still heavily test-score-oriented, which means you will have a doctor who is great at taking tests. But that doesn’t necessarily translate into what patients usually find important: a doctor who listens, cares, empathizes and treats them as an equal partner. Research has shown that these traits are better captured in what is called “emotional intelligence,” measured by the emotional quotient, or EQ (in contrast to IQ). Some medical schools are shifting toward changing their admissions criteria to better reflect this need, but most have not caught on.

But aside from these reasons, we must not understate the fact that power inherently corrupts, especially when there isn’t a system in place to keep it in check. Many of the prestigious doctors who have gotten away with harming others have actually been protected by their institutions.

Read More:  How to Use Mind Power to Change Your Life

In one such case at Yale School of Medicine a doctor remained director of his research institute and was invited to return as chief of his division after sexually harassing a postdoc. The reality is that big-name doctors are important to big-name institutions. Some bring in large amounts of research grants; others add to the clout and prestige of the place they work. But the people in charge who have the power to do something about abuse need to ask themselves, “Is a patient’s safety not worth more than saving face or protecting research money?”

As a young doctor working my way up the academic ladder, I write this in part to remind myself what not to become. Patients deserve the best doctors, but the best doctors are not always the most famous doctors. When push comes to shove, you won’t care about how many titles are behind your doctors’ name, how many publications they’ve authored, how many research grants they’ve obtained or how many TV interviews they’ve starred in.

When disease really strikes, you will want someone who is at your bedside, holding your hand, treating you with respect and care and recognizing that you are a fellow human being. Doctors who think they are God won’t be able to do this. We don’t need any more powerful doctors in medicine—what we need are good people.