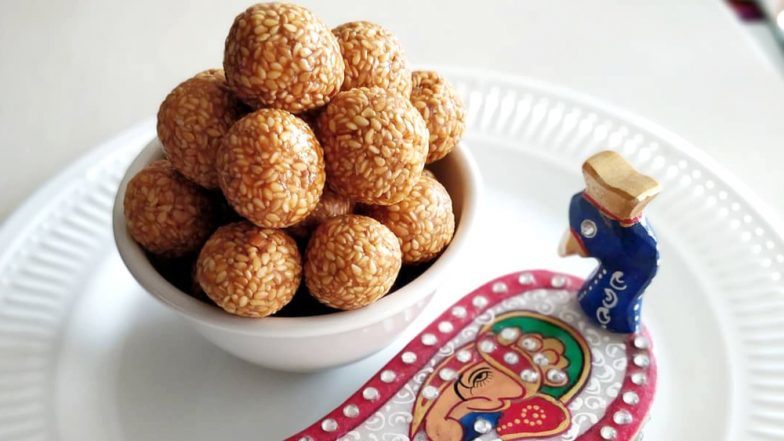 It’s a custom to say ‘Tilgul ghya ani goad goad bola,’ while offering tilgul during Makar Sankranti in Maharashtra. The saying means: “Have tilgul and say sweet things.” But the humble tilgul can do more than just make you speak sweetly. The traditional sweetmeat made of sesame seeds and jaggery holds a special place of importance in Maharashtrian culture. During Makar Sankranti, married women are invited for Haldi-Kumkum where it’s a custom to adorn their foreheads with turmeric and vermillion. Tilgul laddus are then offered to the women, along with gifts such as utensils and clothes. The sweetmeat is a symbolic representation of our ego – tender as sesame seeds yet sweet as jaggery. But apart from the religious significance, tilgul also has many health benefits.

The sesame seeds or til in the tilgul is a nutritious oilseed, often known as the “Queen of oilseeds” since it doesn’t get oxidised easily. The seeds contain 50-60 percent high-quality oil, which is rich in polyunsaturated fatty acids. It’s high in protein, vitamin B1, dietary fibre, phosphorus, iron, magnesium, calcium, manganese, copper and zinc. It also has high levels of bioactive components that offer a lot of health benefits. Know Health Benefits and Why The Holy Basil is Worshiped on December 25 Every Year.

Jaggery is a nutritious sweetener considered healthier than regular processed sugar. It’s made from sugarcane juice, date or palm sap and has a golden brown colour. It’s mostly made of sucrose, and is rich in micronutrients such as iron, magnesium, potassium and manganese. It’s also a good source of Vitamin B. It’s common practice in many Indian households to have jaggery after a big meal for its digestive qualities.

Read More:  How do diabetics get foot ulcers

Tilgul sweets are made by adding roasted sesame seeds and coarsely-chopped peanuts to molten jaggery. The pliable mixture is then moulded into desired shapes. The result is a delicious sweetmeat that has the salty sweetness of the jaggery and the nuttiness of the nuts and seeds. But apart from the great taste, tilgul is also a great health food perfect for the cold weather when it’s made. Here’s how:

The sesame seeds in the tilgul contain rich reserves of antioxidants, which helps reduce oxidative stress. The seeds are one of the richest sources of a nutrient known as lignans, which help protect the body against free-radical damage.

Sesamin in sesame seeds contains anti-cancer properties and is known as an anti-proliferative (prevents spread of cancer), pro-apoptotic (promotes the destruction of cancer cells), anti-inflammatory and pro-angiogenic (promotes the formation of new blood vessels). Phyto-oestrogens in sesame also has a preventive effect against various cancers such as breast cancer.

Sesame seeds are known for their anti-ageing properties due to its rich antioxidant reserves. The antioxidants inside sesame seeds reduce oxidative stress and inflammation. It slows down the ageing process by fighting degeneration of the cells.

Read More:  All about pregnancy that every woman should know

Our ancestors knew how certain foods functioned. Makar Sankranti falls in January, when India experiences winters. Sesame is considered a heat-inducing food, which keeps you warm when the mercury levels dip.

In some Indian households, mothers give their children a lump of jaggery if they think they are getting too pale. And there’s a reason why. Jaggery is a good source of iron and can be given to people who are anaemic.

Eating the til and jaggery rich tilgul provides your body with calcium, phosphorus and other important minerals. “These nutrients are good for improving bone health, especially during the winters,” says Priya.

Winters spell doom for hair health since many experience accelerated hair fall. According to Rujuta, the phytonutrients in sesame helps reduce hair fall and prevents dandruff.

Eating tilgul laddus is a great way to replenish energy when you feel sluggish. “Since jaggery contains sucrose, glucose and fructose, tilgul gives you a burst of energy during the lazy winter months,” adds Priya. Makar Sankranti Recipes: Celebrate the Indian Solar Festival with These Traditional Dishes.

In short, tilgul is a great food to have during the winter months. It has so much more to offer than just its nutty taste. But since it’s a sweet treat, people with diabetes should be wary of going overboard. Exercise moderation when you have the sweet treat.