REVEALED: Experiment shows vaping is better for you than smoking as damage to your lungs caused by cigarettes over a month is illustrated using cotton balls

A revolting experiment has today laid bare how much worse it is to smoke cigarettes than to vape, in the hope of encouraging thousands to kick the habit.

The grim results showed the jar exposed to 320 cigarettes turned brown and sticky, while there was just a light mist in the vaping scenario.

Officials at PHE warn nearly half of smokers don’t realise how much healthier e-cigarettes are and warned it would be ‘tragic’ if smokers stuck to tobacco because of ‘false fears’ about the safety of vaping.

However, experts warn there growing concerns about electronic cigarettes contributing to heart disease. 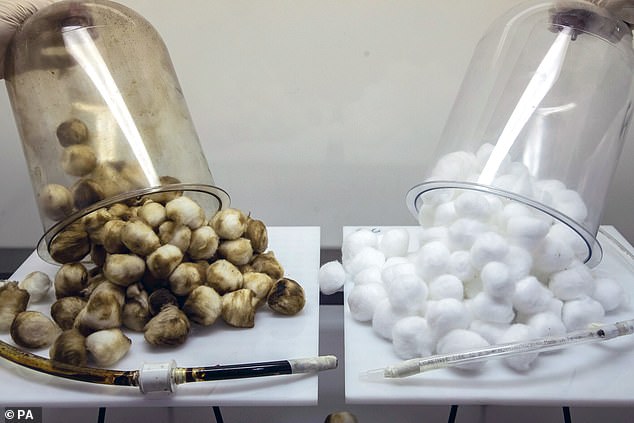 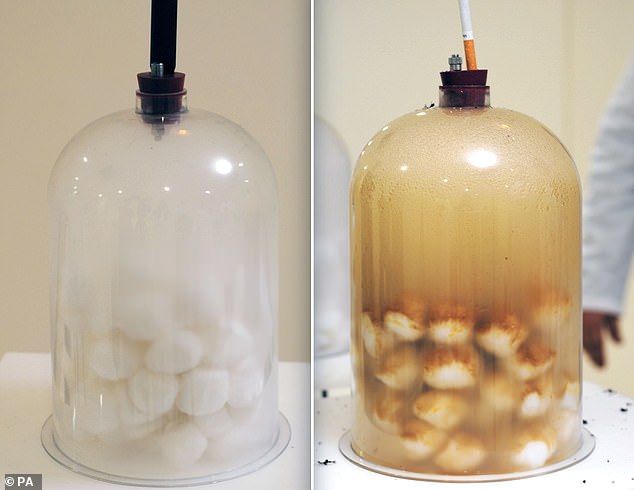 Public Health England says e-cigarettes are definitely a healthier option than cigarettes (right, a jar filled with smoke from 16 packs of cigarettes) and dramatically reduce the risk of lung cancer

E-cigarettes are claimed to be helpful in the fight against cancer-causing cigarettes.

But PHE warns some 44 per cent of smokers believe vaping is equally as harmful as tobacco or don’t realise how much healthier e-cigarettes are.

In a lab experiment scientists revealed how much more damage 16 packs of cigarettes does to cotton wool than the same amount of e-cigarette vapour.

‘We need to reassure smokers that switching to an e-cigarette would be much less harmful than smoking,’ said Professor John Newton, director of health improvement at PHE.

‘We want to encourage more smokers to try and quit completely with the help of an e-cigarette, or by using other nicotine replacement such as patches or gum, as this will significantly improve their chances of success.’

Public Health England bosses claimed ‘false fears’ over the vaping devices are deterring thousands of people from using them.

The campaign repeats the controversial claim that e-cigarettes are 95 per cent safer than cigarettes – a statistic revealed by scientists funded by the e-cigarette industry.

PHE’s move has been criticised as being ‘way out of step with the rest of the world’.

Experts, while admitting the lung cancer risk is lower with e-cigarettes, have other safety fears which have yet to be explored and concerns about young people using them.

E-cigarettes contain a liquid form of nicotine that is heated into vapour to be inhaled, avoiding the harm caused by tobacco smoke. 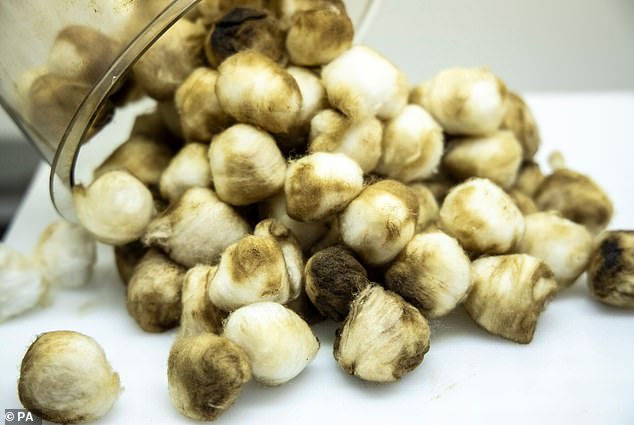 Cotton wool exposed to tobacco smoke (pictured) turned dark and had liquid tar on it in Public Health England’s experiment, showing how much more damage cigarettes can do to the lungs 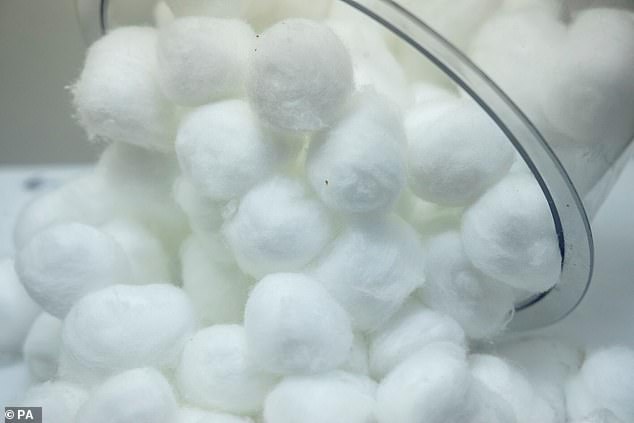 Around three million adults in Britain have used e-cigarettes in the decade or so they have been on the market.

Health experts agree the devices are much safer than smoking tobacco and the gadgets are thought to have helped 22,000 people quit smoking each year.

But Professor Martin McKee, of the London School of Hygiene and Tropical Medicine, a long-term critic of the promotion of e-cigs, has reservations.

He said there are ‘growing concerns’ about the risks of vaping on heart disease and argued the devices are not yet proven to be an effective quitting aid.

‘While there are lots of anecdotal accounts of people using them to quit, we have yet to see any good evidence from clinical trials, the gold standard method, that they work,’ Professor McKee said.

‘We expect e-cigarettes to have a lower risk of cancer but there are growing concerns about the risk of heart disease.

‘Importantly, it seems that those who use both, which is very common, are at greater risk than with either on their own.

HOW COULD VAPING BE HARMFUL?

The flavourings in electronic cigarettes may damage blood vessels in the same way as heart disease, according to research published in June.

The chemicals used to give the vapour flavours, such as cinnamon, strawberry and banana, can cause inflammation in cells in the arteries, veins and heart.

They causes the body to react in a way that mimics the early signs of heart disease, heart attacks or strokes, the study by Boston University found.

Other recent studies have also suggested smoking e-cigarettes could cause DNA mutations which lead to cancer, and enable pneumonia-causing bacteria to stick to the lungs easier.

Researchers at New York University subjected human bladder and lung cells to e-cigarette vapor, which is marketed as being healthier than tobacco.

They found the cells mutated and became cancerous much faster than expected and mice exposed to the vapour also suffered significant DNA damage.

The vapour from e-cigarettes helps bacteria which cause the condition to stick to the cells that line the airways, they said.

The effect occurs with traditional cigarette smoke and those who are exposed to air pollution high in particulates from vehicle exhausts.

‘The World Health Organisation has stated that it is impossible to place any figure on how much safer e-cigarettes are, while it is still far too early to know about long-term effects.

‘Now that we have seen what is happening in the USA, with an explosive growth in e-cigarette use among young people, it is clearer than ever that England is way out of step with the rest of the world.’

PHE’s Professor Newton said: ‘It would be tragic if thousands of smokers who could quit with the help of an e-cigarette are being put off due to false fears about safety.

‘This demonstration highlights the devastating harms caused by every cigarette and helps people see that vaping is likely to pose only a fraction of the risk.’

Dr Lion Shahab, a smoking cessation academic from University College London said: ‘The false belief that vaping is as harmful as smoking could be preventing thousands of smokers from switching to e-cigarettes to help them quit.

‘Research we and others have conducted shows that vaping is much less harmful than smoking and that using e-cigarettes on a long-term basis is relatively safe, similar to using licensed nicotine products, like nicotine patches or gum.

‘Using e-cigarettes or nicotine replacement such as patches or gum will boost your chances of quitting successfully.’

But even the Government’s different health agencies are divided on e-cigarettes.

Public Health England has backed the devices since it declared in a landmark report in 2015 that they should be prescribed on the NHS.

In October 2017 it controversially promoted e-cigarettes in 30-second television advertisements as part of its annual ‘Stoptober’ quit smoking campaign.

However, another official body – the clinical guidelines watchdog NICE – has told GPs not to recommend e-cigarettes because there is limited evidence over whether they are safe.

The Department of Health has adopted a more cautious middle ground.

In its Tobacco Control Plan last year pledging to ‘evaluate critically’ the evidence around e-cigs and to ‘provide clear communication about what is known and unknown about the short and long term risks’.

Dame Sally Davies, the Government’s Chief Medical Officer, has been more critical, warning: ‘People need to recognise that they are not risk free, and therefore they should only be used as a means to help smokers quit and stay quit.’