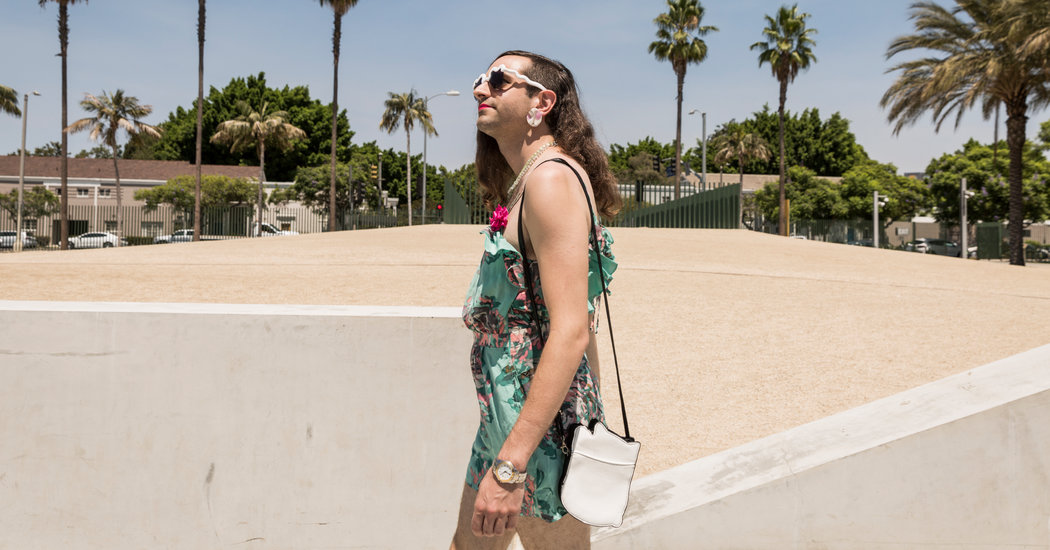 They are the new beautiful people and their pronouns are they, their and them. Fashion courts them. Publishers pursue them. Corporations see in them the future of consuming, as generations come of age for whom notions of gender as traditionally constituted seem clunkier than a rotary phone.

Why settle for being a man or a woman when you can locate yourself more exactly along the arc of gender identity? And, on another axis, why limit your sexual expression to a single definition when you can glissade along the Kinsey scale?

“It’s all about letting go of gender so you can be everything in between,” said Terra Juana, a model with 100,000 Instagram followers who track the booming career and amatory antics of this androgynous Mexican-Filipino beauty with a shaved head, a mile-wide smile, an affection for cowboy hats and an uninhibited tendency to go top free.

In the evolving language of gender expression, Terra Juana, though assigned female at birth, identifies as nonbinary. And in business as in life, TJ, a native of Stockton, Calif., has lighted out for a new territory. It is one in which the conventions of both homo- and heteronormative expression are called into question daily.

“In the past, whether you were a straight woman or a gay woman, it was like either you were supposed to be hypermasculine or hyperfeminine,” said TJ, who, at 29, embodies a somewhat unlikely transit from outcast tomboy teenager subjected by family to aversion therapy to a beauty hotly in demand both for great looks, as may be expected, but equally for a smart-talking renegade attitude.

It is a stance evocative of Annie Oakley, the sharpshooting protofeminist 19th-century rodeo queen whose image is tattooed across the whole of TJ’s back.

This was at a barbecue last winter in the South Central neighborhood of Los Angeles — ribs on the stove, Marvin Gaye on the vinyl turntable, Mason jars limed and salted for tequila shots. The scene that night in a fast-gentrifying corner of the city resembled something like a postmillennial version of “Friends.”

But unlike Rachel, Monica, Phoebe, Joey, Chandler and Ross, whose cisgender, hetero-inflexible couplings were complex but predictable, almost everyone at this party occupied some divergent coordinate on a fast-changing map of human gender and sexuality.

It took a while to get here, and yet, three years after gender fluidity purportedly “went pop,” and almost five decades after academics first theorized that gender is performance, the market has awakened to the burgeoning commercial viability of people like TJ.

That includes Madison Paige, a blond model with wholesome all-American features, a spiked rockabilly haircut and a weakness for Instagram’s Boomerang feature.

If for years Mx. Paige, 25, rose steadily if unspectacularly as a woman through modeling’s ranks, appearing on a cover of Vogue Thailand and in abundant catalogs, it was after coming out as nonbinary that their career took off. Since 2017, Mx. Paige has scored advertising campaigns for Abercrombie & Fitch, 7 for All Mankind, T-Mobile and Coke.

“People think it’s a style, but it isn’t,” said the third-generation model, whose grandmother’s smile once beamed out from tubs of a popular brand of butter. “It’s a way of life.”

It is that putative way of life, and its vast accompanying social media cohort, that has suddenly made the young models so attractive to advertisers. These companies are eager to court and capture a generation of consumers in which, according to a report prepared by the J. Walter Thompson innovation group, 50 percent personally know someone who identifies as gender fluid.

“A lot of brands are taking this leap now and changing how you see what a woman is supposed to be,” Terra Juana said, pulling on a long-neck beer. “I like changing the image of me to what I’m supposed to be and not what you think I am.”

After a decade as a slow-burn talent in the business, Terra Juana won roles in advertising campaigns for Kenneth Cole and L’Oréal; has shot ads for ASOS, Hurley and Skechers; has been cast in an indie film project by the creative team behind “13 Reasons Why”; and is taking lessons on runway walking for the catwalk gigs that unexpectedly cropped up after a ballyhooed appearance in a men’s wear show during New York Fashion Week last season.

The embrace of nonbinary identity in commercial realms is far from being a diversity ploy by the fashion industry or yet another trip to gender-bending’s reliable costume trunk (see: the controversy over Gigi Hadid’s and Zayn Malik’s appearance on the July 2017 cover of Vogue, which generated a Twitterstorm, calling the magazine out for mistaking costume play for gender expression).

There is more at work here, in other words, than Gucci sending girlie boys onto its runways dressed in frilly frocks or brands straining to appear woke.

“There is not one idea of beauty or gender any more,” the star hairdresser Guido Palau said, referring to the runway looks he created for Marc Jacobs’s spring 2019 runway show. Alternating lacquered bouffant updos reminiscent of the 1960s with dyed Marine crew cuts, Mr. Palau, in concert with Mr. Jacobs, playfully undercut the tropes of masculine and feminine presentation.

“It wasn’t even the nonbinary models that had the buzz cuts,” Mr. Palau said. “We put some of them in the bouffants.”

The point, he added, is that fashion must open itself up to a plurality that makes no insistence on “being a woman or a man when you can be everything and anything in between.”

Read More:  Reproductive System Concerns Every Woman Should Be Aware Of

By self-definition an AMAB (“assigned male at birth”) transfeminine nonbinary person, Mx. Tobia’s chatty and propulsive memoir of gender emergence, “Sissy: A Coming-of-Gender Story,” is set to be published next spring.

In it, Mx. Tobia, 27, describes a metamorphic journey from intellectually precocious, effeminate, churchgoing son of middle-class parents in Raleigh, N.C., to standard-bearer for an identity that, while far from new in historical terms, still is met with discomfort and scorn.

“When I was in college, the whole universe felt so binary,” Mx. Tobia, an Arab-American six-footer, said one blistering day this summer as they sauntered on heels around the campus of the Los Angeles County Museum of Art and down a ramp beneath the Michael Heizer sculpture “Levitated Mass.”

If Mr. Heizer’s achievement lies in his having rendered a 340-ton rock weightless, that of Jacob Tobia can be seen in a seemingly effortless ability to muscle aside the boulder of societal expectation.

“I finally said to myself, ‘Damn it, I’m going to Dollar General to buy some cheap gold glitter polish and the brightest red lipstick I can find,’” Mx. Tobia said. “And, when the lip was on and the polish was dry, I had this moment where I realized it’s not that I’m exploring anything new here. I’m calling back an old part of myself.”

That it cannot have been easy going for Mx. Tobia, as they sought to regain and inhabit an identity long submerged, was made clear by the sidelong glances and titters from museumgoers, who seemed perplexed by the sight of anomalously paired gender markers that may have seemed jarring: a hairy chest, heels, dime store sunglasses, a floral minidress.

“People are always surprised when I tell them, but as transfem nonbinary folks, what we face is drastic,” Mx. Tobia said, explaining how on a visit to New York not long ago they listened in horror on a subway car as two strangers loudly discussed whether to set them aflame. “They were, like: ‘What is that? We should be burning that.’”

The Switzerland of Gender

Stories like Jacob Tobia’s put the lie to claims that nonbinary identity expression is just a fashion. It is possible to critique the commercial exploitation of a previously untapped market, as Aaron Rose, a transgender diversity consultant for clients including Columbia University and McKinsey & Company, said.

“But you can also think about this” — the emergence of a marketplace — “in terms of people looking for socially acceptable ways to bust out of gender constrictions,” Mr. Rose said. “And one way to do that is to enjoy consuming gender nonconforming experience.”

Mr. Rose was referring to the opening early this year of the Phluid Project, a NoHo store billing itself as the world’s first nonbinary retail shop; to a booming trend in the cosmetics business for so-called genderless beauty, as promoted by makeup artists including Patrick Starrr and Manny Gutierrez; and to the New York Fashion Week designers, like Raf Simons at Calvin Klein, rushing to produce gender neutral collections.

“What I find I’m trying to do is get back to a childhood knowledge that was taken away from me by a world that doesn’t know how to give gender nonconforming people room to exist,” Mx. Tobia said. “The more I enlarge my spirit and identity, the more uncomfortable the world becomes. Over the long term, we may be able to shift that, but I’m smart enough and historically informed enough to know that’s not going to happen anytime soon.”

What seems inarguable is that a move toward gender self-determination is underway, whatever its pace. On a chilly evening last winter, the model Rain Dove Dubilewski, 28 and their roommate and friend Cory Wade Hindorff, 27, were addressing an audience at the Phluid Project on the struggle to promote fluidity in a world inured to one-size-fits-all expressions of self — gender, in Mx. Wade’s view, as a too-tight shoe.

Rain Dove, as the model is known, has been in the news lately for playing a role in providing text messages from Asia Argento that suggested a prior intimate relationship between the actress and a young actor who is now suing Ms. Argento for sexual abuse.

Alternating between male and female personas (and, in one case, in Mickey and Minnie Mouse costumes), the model has tested the public reaction when they go for a haircut, order coffee, quarrel or panhandle when presenting alternately as a woman or a man. Occasionally on these outings Rain Dove is assisted by Mx. Wade, who is biracial and nonbinary transfeminine.

“So many people are stationary in identity,” Rain Dove said. “I think we need to leave some room to shift.”

Labels are the issue, Cory Wade told a rapt audience at Phluid Project that evening, and it was pigeonholing that had made being a contestant on “America’s Next Top Model” so trying for Mx. Wade, whose gender presentation is always in flux.

“I don’t care whether you call me he or she or refer to me as a man or a woman,” Cory Wade said. “I never felt it was necessary to settle in any one place on the spectrum. My identity is up to me. What I am is for me to decide.”