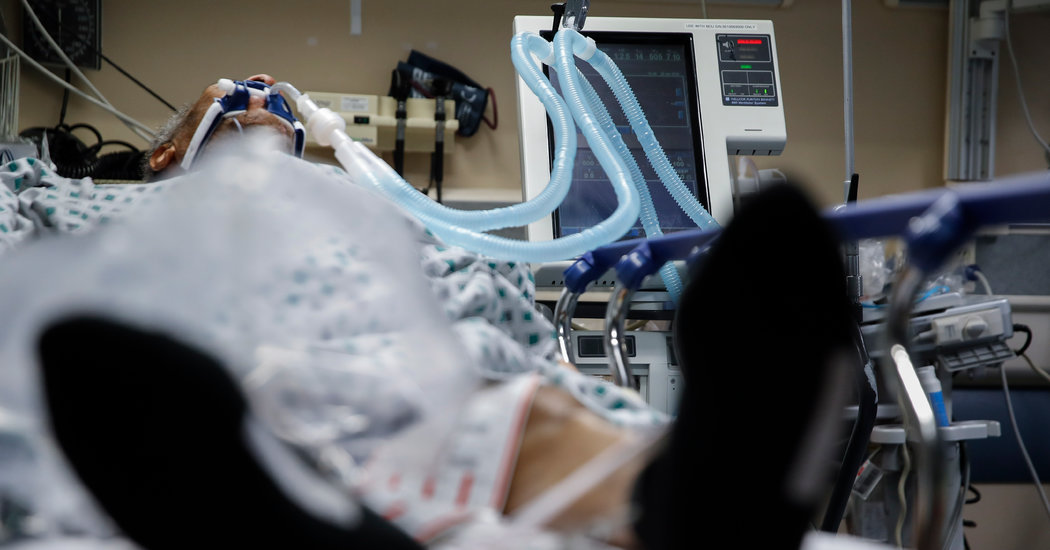 The arrival of Covid-19 has provided a nuclear-level stress test to the American health care system and our grade isn’t pretty: At least 71,100 dead, 1.2 million infected and 30 million unemployed; nursing homes, prisons and meat packing plants that have become hotbeds of infection. The actual numbers are certainly far higher, since there still hasn’t been enough testing to identify all those who have died or have been infected.

By all accounts a number of other countries have responded — and fared — far better.

In some ways Covid-19 seemed the biological equivalent of Sept. 11 — unthinkable until it happened. Who would have thought individuals would fly jets filled with people into skyscrapers filled with workers? Likewise, who would have predicted the onslaught of a new virus that was stealthy, easily transmissible and also often perilous?

Actually, many public health specialists, including Dr. Anthony Fauci, did. And yet, our system failed in its response. Heroic health care providers were left to jury-rig last-minute solutions to ensure that the toll wasn’t even worse.

But the saddest part is that most of the failings and vulnerabilities that the pandemic has revealed were predictable — a direct outgrowth of the kind of market-based system that Americans generally rely on for health care.

Our system requires every player — from insurers to hospitals to the pharmaceutical industry to doctors — be financially self-sustaining, to have a profitable business model. As such it excels at expensive specialty care. But there’s no return on investment in being primed and positioned for the possibility of a once-in-a-lifetime pandemic.

Combine that with an administration unwilling to intervene to force businesses to act en masse to resolve a public health crisis like this, and you get what we got: a messy, uncoordinated under-response, defined by shortages and finger-pointing.

No institutional players — not hospitals, not manufacturers of ventilators, masks, tests or drugs — saw it as their place to address the Covid-19 train coming down the tracks. Meanwhile, the Trump administration, loath to deploy the Defense Production Act, did so only sparingly and slowly, mostly relying on back channel arm-twisting and “incentives” like forgiving liability to get business buy in. That’s because in the current iteration of American health care, tens of thousands of people dying is not incentive enough.

Let’s look at the failures.

1. Ventilators. As images of overwhelmed Italian hospitals flashed across screens, American hospitals projected they might not have enough ventilators for their mounting caseload. They turned to government, which didn’t have enough either. President Trump castigated the states and hospitals for not being prepared.

But, operated as businesses, hospitals have zero incentive to stockpile. Like hotels, they aim to keep their beds full, or nearly so, with well-paying customers, such as those in need of artificial-joint or heart procedures. Supply-chain management dictates they stock for those needs. A vast storeroom in the basement filled with ventilators that might be needed once in a generation or never?

Long ago, before hospitals had lucrative revenue streams from billing and insurance, they relied on philanthropy to meet urgent health needs. The March of Dimes helped finance the treatment of polio victims and the development of improved iron lungs. Today hospitals instead solicit donations for more glamorous projects — cancer centers, new wings, genomics research — with donors’ names affixed.

Indeed in a 2017 paper, an official with the Centers for Disease Control and Prevention warned that the country needed a better strategy for stockpiling ventilators, highlighting a “practical problem”: “hospitals must accept responsibility for the costs and resources needed to manage and maintain an excess of ventilators that are likely to be unused in the absence of pandemic-related surges in demand.”

They are unlikely to do so unless government requires them. We’ve long required ocean liners to have lifeboats and life preservers even though their operators hope to never hit an iceberg.

2. Testing has proved the persistent Achilles’ heel in the U.S. response. Even in “hot zones,” because of a shortage of tests, they were often rationed to the very ill or essential workers. That makes it difficult to guide treatment and nearly impossible to reopen society. In January, fearing that the virus would hit the United States, researchers at university labs — notably the University of Washington — jumped in and developed a test. But the commercial and hospital labs that deal with the actual blood work and viral analysis in this country did not. Why would they? There was no market.

At that time, it wasn’t clear that the coronavirus would produce a pandemic, and there was no billing code for a test and no sense of the price it could garner. With requirements for Food and Drug Administration approval expensive and cumbersome, developing a test was a business non-starter. Indeed, months later, after the billing code was created and the Medicare price was set at $ 51, labs complained that it didn’t cover costs and wasn’t attractive enough to motivate adequate response. The price was doubled. (Even that most likely seemed somewhat paltry for labs that often charge $ 200 for basic blood tests.)

On March 16, the Trump administration set aside the F.D.A. approval requirement, bringing a host of new players into the fray. But in our market-driven, decentralized system it’s every provider for himself, and there is no efficient way to connect the new supply with demand. Despite the fact that the administration appointed a national coordinator, by mid-April newly able labs were taking to Twitter to plead for business, like this one in Ann Arbor, Mich.: “We have restructured our lab to help with testing. The problem has become finding samples! Can’t get in touch w/ anyone who needs us.”

In contrast, South Korea, with its national health system, engaged its private test manufacturers with a plan in January, promising them quick approval for a coronavirus test and the widespread use of it in nationally organized and financed testing. With a guaranteed market, 10,000 tests a day were available within weeks, allowing the country to avert a shutdown. The federal government or the C.D.C. might have played that role in the United States, but did not.

Read More:  Ideas How To draw An Anime Personage

3. Testing components and P.P.E. The Trump administration insists that there are plenty of tests that states are not using. Governors say they can’t do nearly enough tests and need help. That’s partly because conducting tests involves access to a number of components — kits, chemical reagents, swabs, personal protective equipment, sometimes custom cartridges for machines. Miss any one of those things and testing becomes impossible. It’s like trying to make bread with all the ingredients except yeast.

Just as we patients pay item by item — the blood test, the X-ray, the acetaminophen pill — hospitals and doctors’ offices also order item by item, with different sources for each component, as they search for the best deals. And medical manufacturers, which make dozens of products — some very profitable and some not — have no “incentive” to produce low-margin items in excess of usual needs. In recent years, this has increasingly led to intermittent shortages during which hospitals find themselves competing to procure IV fluids, cheap old anti-nausea meds and some cancer drugs. So it is no surprise that a similar phenomenon is handicapping a coronavirus response that has required a huge increase in simple accessories like masks.

“The private sector can directly purchase” personal protective equipment “from manufacturers and distributors, as they normally do,” a press officer for the Federal Emergency Management Agency said in late March, explaining why the president chose not to use the Defense Production Act even as states like New York were begging for help, facing over 5,000 new cases and nearly 100 deaths a day.

Initially they could not find enough of that equipment, and when they did, it came at a price — as market forces would dictate: When demand for the items exceeded supply, prices rose and bidding wars began. In our market, you get companies to ramp up production of low-margin items by offering ever higher prices. So $ 1 masks cost $ 6. Without a national system for such purchases in a crisis, we are essentially forcing hospitals and states to negotiate the price of water during a drought. (Alternatively, we could require all hospitals to have a 90-day supply of essential response items on hand, as Gov. Andrew Cuomo of New York has now done.)

4. Hospitals did not coordinate. Early on, New York’s elite hospitals — staring down a crisis themselves — did not jump in to set up outpatient testing centers. That task was left largely to the public hospitals, resulting in crowded lines, which may have risked more infection spread. The elite hospitals also generally did not share precious protective gear with those harder hit.

In our market-based system, hospitals are primed to compete, not coordinate. They compete for patients who need lucrative procedures and for ratings in magazines like U.S. News & World Report. While legally they have to treat anyone who turns up in the emergency room, they are not eager to treat infectious diseases like Covid-19, which disproportionately hits people with poor insurance and carries a stigma. “No. 1 in Covid-19 Treatment!” is bad for the brand. The lack of coordination likewise meant that in California, one hospital had the beds and protective equipment to continue doing elective procedures, while another — 75 miles away — was overwhelmed by Covid-19. In a national or nationally coordinated health system they would have been obligated to help each other.

5. The hospital rescue. Hospitals will receive tens of billions of dollars as part of coronavirus relief packages passed since late March. This is partly because they have delivered extraordinary treatment of Covid-19 (which doesn’t pay well) but also because they’ve had to cancel high-profit procedures like joint replacements and sophisticated scans to make room for this low-profit-margin illness.

In the past quarter-century, we have evolved a reimbursement system that showers cash on elective and specialty care and discourages hospitals from serving the health needs of society. That is true even though two-thirds of our hospitals are tax exempt because they — in theory — perform community benefit. In a functioning health system, pandemic preparedness and response would be part of the expected job. In the 1980s when H.I.V./AIDS was overwhelming hospitals in New York, treating those patients was simply part of each system’s obligation — though some did so far better than others.

All this doesn’t necessarily mean that we need a government-run health system or should eliminate all market influence in health care. In fact, Medicare for All would not by itself solve the above problems, since it’s mostly a payment system that largely relies on providers to come through with services when needed.

But the Covid-19 stress test has laid bare a market that is broken, lacking the ability to attend to the public health at a time of desperate need and with a government unwilling — in some ways unable — to force it to do so. This time around, thousands of medical professionals have stoicly answered the call to treat the ill, doing their best to plug the longstanding holes and vulnerabilities that the pandemic has revealed.

Whether regulated or run by the government, or motivated by new incentives, we need a system that responds more to illness and less to profits.

The Times is committed to publishing a diversity of letters to the editor. We’d like to hear what you think about this or any of our articles. Here are some tips. And here’s our email: letters@nytimes.com.