Adam Toren remembers the last time he crawled into bed, pulled the covers over his head and took off sick from work. “My whole family got wracked by the flu around 2006,” said Mr. Toren, a tech entrepreneur and writer. “Hopefully, that was the last time.”

Thirteen years later, Mr. Toren, who lives in Phoenix, said he has not missed another day of work from illness, a streak of which he is exceedingly proud. To keep it going, “I monitor my sleep cycles,” he said, laying out the things he believes keep him healthy. “I don’t drink coffee. I drink specialty teas — Gyukuro, a Japanese tea. I take turmeric and resveratrol,” a supplement.

Mr. Toren’s attendance streak may be an outlier, but more and more, the sick day is disappearing from the office vocabulary, even as we hit peak flu season. Once, a sick day was just that — a day away from work to focus on recovery (or at least pretend to: Think “Ferris Bueller’s Day Off”).

But in recent years, it has become something murkier in definition and more reflective of our highly competitive, 24-7 work lives. The shifting definition and expanding mobility of the office — thanks to remote work and the rise of contractors in the gig economy — is also making the sick day somewhat passé, at least for some jobs.

“Even if you take a sick day, you’re still emailing in the morning, checking in later in the day,” said Kit Warchol, the head of content marketing for Skillcrush, an online coding school. “It’s become more of a norm to write to your colleagues and tell them you’re working from home.”

Read More:  Better to Get an Online Doctor than Trust Medicine Related Sites

That’s what Justice Ruth Bader Ginsburg did this week, when she was absent from the Supreme Court to hear arguments in a case while she recuperated from cancer surgery. She would participate from home, Chief Justice John Roberts said.

Working from home may sound relaxing, but the “working” part of that phrase underscores the expectations that accompany it: being available to check and respond to email, hop on a conference call and generally be productive, even if you feel lousy.

In a previous job, Ms. Warchol got the flu and found herself in a doctor’s waiting room. With idle time and a phone in her hands, she ended up doing email. “Smartphones have changed a lot of things,” she said.

Skillcrush employees work remotely (Ms. Warchol lives in Los Angeles), and the company has a flexible hours policy. It does not offer what have traditionally been called sick days, but rather depends on employees to responsibly manage their time and communicate with co-workers if they can’t work because of illness or other circumstances.

When Ms. Warchol came down with a cold last fall, a few weeks after staring her job, that meant “writing in the morning, when I was fully awake and had just taken Dayquil. Then in the afternoon, I would let my team know on Slack that I was going dark a bit.”

Ms. Warchol decided to work through her cold rather than face “the anxiety of falling too far behind,” she said, a nod to increased workloads as companies have downsized or cut back on hiring (or at firms in start-up mode).

Read More:  How much is oral acne medication

Some workers may be afraid to take a true sick day and seem dispensable to their employers. As Ms. Warchol said, “Will it be seen as a sign of a lack of loyalty or tenacity?” And freelancers who lack job security especially may also have such concerns.

Mark J. Marsen, the director of human resources for Allies for Health & Well-Being, a Pittsburgh agency for those with H.I.V. and other sexually transmitted diseases, said the sick day “is alive and well” at his company, although the semantics have changed.

Broadening the definition gives employees greater privacy, Mr. Marsen said. It also takes into consideration mental health and whether a child or another family member who depends on the employee is sick and requires care.

No longer does the employee have to “sell” their sickness to their boss with a list of symptoms.

Personal days mean “you’re not able to do work today because of some circumstance,” Mr. Marsen said.

Last month, Mr. Marsen caught a cold while traveling and missed two days of work. On the third day, he said, he felt well enough to work from home and checked his email, getting rid of the junk in his inbox. “That’s a life enhancer,” he said.

But isn’t it unhealthy to never have a day to totally disconnect from your job and recover? Ms. Warchol, for one, appreciates the flexibility of the new model. In the barista position she took right out of college — and in many other jobs — working from home wasn’t an option.

“It didn’t matter if I woke up with a sore throat. I was there at 6 a.m. making people’s coffee,” Ms. Warchol said. “There is a certain amount of privilege in not having to take sick days because you can work from your bed.”

Read more about people who love talking about their symptoms
Have You Heard? This Guy Has a Cold 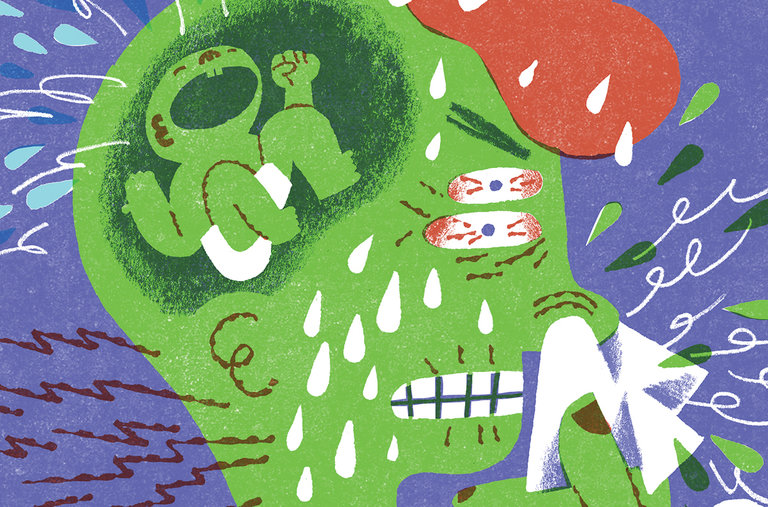