Losing weight is hard work, but many people who have lost weight may agree that keeping it off can be an even greater challenge.

A lack of self-control or a few too many dietary indulgences are often cited as reasons for regaining weight. But a new study in the November issue of BMJ questions this conventional view, finding that the type of calories you consume may influence how likely you are to keep that weight off for the long term.

The human body is designed to protect itself when it sheds weight, whether voluntarily or involuntarily, by increasing the urge to eat while slowing down the metabolism and more efficiently storing fat. Although it may be exciting to see the numbers on the scale drop, this makes it harder to keep losing weight or even maintain weight loss.

The purpose of the BMJ study was to see if different levels of carbohydrates in the diet could prevent these metabolic changes from occurring, so that weight lost might stay off. The focus on carbohydrates was based on the carbohydrate-insulin model of obesity, which holds that high insulin levels that result from eating a high glycemic load diet (i.e., highly processed carbohydrates like refined breads, crackers, cookies, and sugars) cause energy from the food to be stored more easily as fat, and may increase hunger and food cravings, lower energy expenditure, and promote weight gain.

“This study raises the possibility that a focus on restricting carbohydrates, rather than calories, may work better for long-term weight control.”

Read More:  Can you catch flu

Participants were first placed on a diet to lose about 12 percent of their starting weight (weight loss averaged 25 pounds) to kickstart metabolic changes. The next phase randomly assigned the 164 participants who achieved this loss to one of three test groups:

The protein amount was the same in all groups, at 20 percent. Total calories were adjusted up or down in each participant to prevent any weight changes. All meals were provided to the participants during the weight-loss phase and throughout the 20-week test phase. The types of foods in each diet group were designed to be as similar as possible, but varying in amounts: The high-carbohydrate group ate more whole grains, fruits, legumes, and low-fat dairy products, while the low-carbohydrate group ate more fat but eliminated all grains and some fruits and legumes.

Read More:  Body size may influence women's lifespan more than it does men's

“This study raises the possibility that a focus on restricting carbohydrates, rather than calories, may work better for long-term weight control,” said David Ludwig, professor in the Department of Nutrition at the Harvard T.H. Chan School of Public Health, who led the study with Cara Ebbeling from Boston Children’s Hospital.

Walter Willett, professor of epidemiology and nutrition at the Harvard Chan School, who was not involved in the study, noted that, “These findings from a carefully conducted investigation can help explain why low-fat/high-carbohydrate diets are not successful for most people and have failed to maintain weight loss in formal randomized trials that have lasted for one year or longer.”

This story originally appeared on the Harvard Chan School’s website, The Nutrition Source.

This work was conducted with grants from Nutrition Science Initiative (made possible by gifts from the Laura and John Arnold Foundation and Robert Lloyd Corkin Charitable Foundation), New Balance Foundation, Many Voices Foundation, and Blue Cross Blue Shield. David S. Ludwig was supported by a mid-career mentoring award from the National Institute of Diabetes and Digestive and Kidney Diseases (K24DK082730). 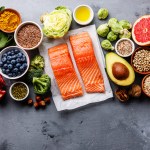