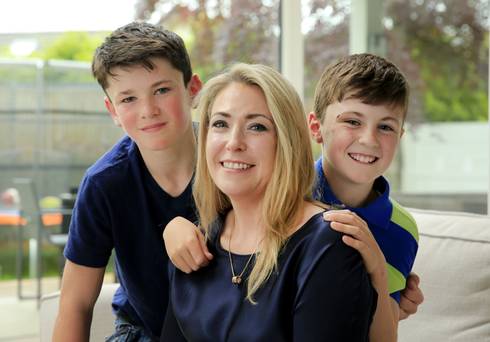 It can develop suddenly or can happen slowly over months or even years and is most commonly caused by previous heart damage – but it can and does affect seemingly healthy people.

The Irish Heart Foundation has launched a new symptom checker on their website – KnowYourHeart.ie – where members of the public can go online and check if they are experiencing any heart failure symptoms. It will help make people aware of the warning signs which are often dismissed as ‘nothing serious’ and can be attributed to a busy lifestyle or simply being out of shape.

Rebecca Redmond knows only too well how this condition can seem to come out of nowhere as just over two years ago, the 46-year-old developed pneumonia and despite going on a course of antibiotics, couldn’t shake off the feeling of being unwell all the time.

“After recovering from pneumonia, I just kept getting sick over and over again,” says the married mother-of-three. “I put it down to being middle-aged as I just thought that stress and tiredness were an inevitable part of a busy life. But I also kept getting viruses and colds, then I got a kidney infection – it seemed like I picked up every little bug that was going.

“I also put on weight as I was too tired to go to the gym and would feel so exhausted that when I stopped the car at a traffic light, I knew that if I closed my eyes I wouldn’t be able to open them again.”

The Dublin woman said she put up with the symptoms as she believed it was part and parcel of juggling a career and family, but a year later her legs started to swell up so she sought medical help.

“Over the course of a year, my ailments continued and although they were probably worsening, it was so subtle, that I got used to feeling unwell,” says Rebecca who works as a nutritionist. “I could explain everything away as just being part of getting older although I couldn’t understand why I was so unfit and gaining weight as I didn’t overeat.

“Then my legs started to swell up so I went to the Emergency Department (ED), where they did a 30-second trace on my heart as well as taking some bloods. Everything seemed fine so they sent me away again because I didn’t raise any red flags – I wasn’t overweight, I wasn’t old and I was female so I wasn’t your usual heart failure patient.”

The swelling in her legs continued and a few months later went beyond her calves and then eventually to her thighs – so she went back to hospital where after running various tests, they finally discovered that Rebecca was actually suffering from heart failure.

“When I was finally diagnosed, my first reaction was relief as deep down I always knew there had to be something wrong with me,” says Rebecca. “But I was also very shocked as was told that I might have to have open heart surgery- which was very scary. I was put on a diuretic and started to lose weight which in turn slowed my heart rate down. I lost 18kg over the following weeks and this was very gratifying as I knew I hadn’t been eating enough to gain so much weight.

“I was in hospital for eight weeks in total and it was discovered that I had a developed a virus in my heart – which is common in middle-age if you don’t rest after having pneumonia. I am also predisposed to heart clots so I was put on a blood thinner and beta blocker – the same medication that someone in their eighties might be on. Then in February of this year I had a procedure done to kick start the heart back to its normal rhythm and because it’s usually something which only affects older people, I was in a mixed ward of elderly patients – it was a very strange time.”

Today Rebecca is living a normal life, but says this is down to the fact that her heart failure was detected in time.

“I would advise anyone who has similar symptoms to what I had to get checked out and make sure to urge doctors to do a longer trace as 30 seconds wasn’t long enough to pick-up the irregularities in my heartbeat,” she says. “Since my diagnosis and treatment, I have had to change my life and be kinder to myself. I’m much more self-aware and don’t run around all day doing everything for everyone as I’m just not able to do it. I still function at a very high-level, but I don’t have that ‘extra tank’ of energy that we all have in reserve when we need to do jobs, but feel exhausted – I can’t do that anymore.

Read More:  rX My Heart and Hope to Die

“I’m no longer on medication which is fantastic but I am closely monitored and see a doctor every few months where I get fitted with a heart monitor for 24-hours to make sure that everything is working properly.

“I was advised to get an ECG app on my phone which I can check my heartbeat and it will pick up anything erratic. And because I work as a nutritionist, I have always had a good diet and exercise regularly. The only thing I have had to work on is getting enough sleep and cutting down on stress – which I am working on all the time.”

There isn’t a cure for heart failure at the moment, but with the help of specialised treatment, people like Rebecca can live full and happy lives with the condition.

“Heart failure generally responds very well to a combination of lifestyle changes and medicine while some people may need operations or be fitted with pacemakers or similar devices,” says Dr Angie Brown consultant cardiologist and medical director of the Irish Heart Foundation.

“Patients with heart failure are often prescribed a number of medications to help improve symptoms, keep them as well as possible, help prevent the condition from getting worse and help to improve their life expectancy.

“Despite this, some people may not get better and their heart failure worsens. So it is important to understand that the progression of heart failure can be unpredictable and varies from person-to -person.”

Fact file: What is heart failure?

⬤ Heart failure is a medical condition where the heart does not work as efficiently as it should. This means that your blood can’t deliver enough oxygen and nourishment to your body to allow it to work normally.

Read More:  Why do diabetics not feel heart attacks

⬤ This can cause various symptoms such as, fatigue and a build-up of fluid in the lungs and other parts of the body, such as legs and abdomen.

⬤ It often develops as a result of another condition such as coronary artery disease, a heart attack or high blood pressure.

⬤ There are currently about 90,000 people living with the condition in Ireland.

⬤ A combination of medication and lifestyle changes will help reduce congestion (fluid build-up), ease symptoms and improve the pumping function of the heart.

⬤ Lifestyle changes can help to keep a patient’s condition as stable as possible so they can continue to do the things they enjoy.

1. Weighing yourself regularly – sudden weight gain may suggest too much fluid is building up in your body.

2. Watching the amount of fluid you have each day.

3. Controlling your blood pressure to reduce the strain on your heart.

4. Cutting down on salt – too much salt in your diet can make your body hold on to water.

5. Stopping smoking – this is the single most important thing you can do to live longer.

6. Limiting how much alcohol you drink to ensure your symptoms aren’t made worse and to help keep your heart healthy.

7. Keeping active – this can help improve your energy, stamina and fitness. Regular physical activity can also help you to improve or cope with your symptoms.

8. Keeping to a healthy weight which will help to prevent your heart from working too hard.