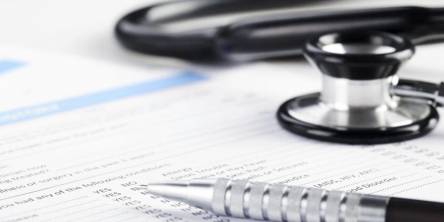 The term stethoscope is derived from two Greek words; stethos (meaning chest) and scopos (meaning examination). Apart from being used by medical practitioners to hear the heart and chest sounds, the stethoscope is also used to listen to bowel sounds and blood flow noises in the veins and arteries.

The first stethoscope was invented in 1816 by a French physician known as Rene Laennec who used a long, rolled paper tube to funnel the sound. The stethoscope was somewhat simple but very effective. Three years later, Laennec improved his paper stethoscope into a wooden monaural stethoscope that had a large diameter base that funneled sound through a small opening. But, unlike modern scopes, this early version only transmitted sound to one ear and had ivory ear-tips.

It wasn’t until 1843, that George P. Cammann of New York developed the first binaural (sound into both ears) stethoscope. This is the model that would be used for over 100 years with very few modifications, one of which was the introduction of an ebony chest piece with tubing made of spirals of wire that was covered in layers of silk dipped in gum elastic. Another modification to the original Cammann stethoscope was done in 1890 when the device was refined with a steel spring between the metal ear tubes.

Read More:  13 Ways Coronavirus Is Different From All Epidemics Through History

Considered as the most significant milestone in the development of the stethoscope, Dr. Littmann’s invention was a streamlined, lightweight stethoscope, with a single tube binaural, which was available in both stainless steel and light alloy.

The device was described by Dr. Littmann, in the November issue of the AMA journal, as the ideal stethoscope. It included a closed chest piece with a stiff plastic diaphragm to filter-out low-pitched sounds. It also had an open chest piece to hear low frequency as well as high-frequency sounds.

Other innovative features of Dr. Littmann’s stethoscope included firm tubing with a single lumen bore, a spring with precise tension to hold the ear tubes apart with firm and short tubing and had the shortest practical overall length. The device was generally light and convenient to carry and use.

In a bid to promote his invention, Dr. Littmann founded the company Cardiosonics. This company was meant to produce two distinct stethoscopes, one for doctors and another for nurses. On April, 1st 1967, 3M, upon recognizing the acoustics and unique design of the Littmann stethoscopes, decided to acquire Cardiosonics. Dr. Littmann then worked for 3M as an adviser where he helped to further innovate this essential diagnostic tool.

Throughout the years until the late 1970′s, 3M had developed a total of 40 “combination stethoscope” models. The devices were mainly in stainless steel and aluminum featherweight. They had pediatric size, gold-plated chest pieces. The tubing color was still limited to black and grey with lengths of 22 and 28 inches.

It is during this period that the ultimate 3M Littmann Cardiology Stethoscope was born. Commonly known as the “cardiologists’ dream stethoscope” because it was developed by a team of 50 world’s leading cardiologists, this product had a revolutionary two-tubes-in-one design, softer ear-tips and deeper bell for improved response to low frequency. Improvements to the product continued henceforth and in 1987, Tom Packard, a 3M engineer, invented the 3M Littmann Master Cardiology Stethoscope, a unique single-sided chest piece stethoscope which features 3M’s tunable diaphragm technology.

The stethoscope is a device that doctors use to listen to sounds inside the body, like the heartbeat. It is used to generally reveal the overall health condition of a patient. It also helps in detecting and diagnosing ailments and diseases.

When it comes to stethoscopes, the most popular brand is the Littman brand. There are different types of this stethoscope. Here is a simple guide to help you choose the best Littman stethoscope for your needs.

The Littman Master Classic II stethoscope is ideal for doctors who work where there is a lot of noise in the surroundings, like outdoors or in mobile medical hospitals. In places where there are many patients, visitors, or children, this stethoscope still works effectively.

The Cardiology III is suitable for use when listening to the sounds in the lung area. This type of stethoscope is often used by pediatricians or doctors who specialize in treating children. It is also a favorite of med students because it is very easy to use and relatively affordable.

Classic III is one of the favorite stethoscopes of many doctors because it is an all-around type of stethoscope that can be used to listen to almost any part of the body.

The most recent model is the Littman model 3000. It is an electronic stethoscope that effectively eliminates ambient sounds coming from different directions. Since it is an electronic device, it can amplify or increase body sounds to something that a doctor would easily and clearly hear.

If you are planning to buy a stethoscope, the Littman brand is one brand you should consider. It is very durable and widely used by medical practitioners around the world. Using stethoscopes that are of poor quality can affect diagnosis and treatment because the device may not be accurate at all. Never compromise quality for the price.