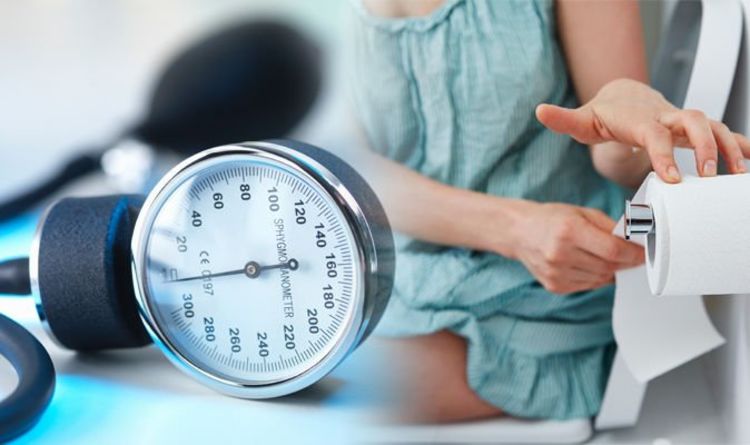 High blood pressure symptoms can be mistaken for other less serious health problems, but in many cases symptoms don’t show. If they do, some of the most well-known signs are headaches, shortness of breath, dizziness and even stomach pain. Recognising the early signs of high blood pressure is important as it can help you avoid complications such as a heart attack. So another symptom to note, which is often overlooked is nocturia.

Nocturia is the medical name for frequent urination at night.

While it can be related to drinking too much fluid during the evening, it’s also an overlooked symptom of high blood pressure, according to Dr Sarah Brewer.

On her website, MyLowerBloodPressure.com, Dr Brewer said: “Studies show that people with nocturne are more likely to have high blood pressure than those who don’t experience passing water at night.

“In one study involving 610 older people with a raised systolic blood pressure (upper reading, average blood pressure 173/86mmHg), nocturne was the most frequent complaint, affecting 68 per cent of men and women alike.

“In another study involving 5,257 men aged 20 and over, having hypertension increased the chance of nocturia by 40 per cent – a similar increase to that seen for older men with benign prostate enlargement.”

So why can high blood pressure cause frequent urination at night?

It could be caused by the kidneys having to work harder to regulate the amount of sodium in patients’ bodies.

Dr Brewer explained: “When you have uncontrolled high blood pressure, your kidneys have to work harder to excrete the same amount of sodium as people with normal blood pressure.

“This leads to a tendency to retain both salt and fluid. This retained fluid may stay within the circulation, causing blood pressure to increase even further.”

If you are concerned by frequently urinating at night you should see your GP to find out why it’s happening.

Other symptoms of high blood pressure, according to Superdrug Online Doctor, are:

One way to prevent the condition developing in the first place, as well as to control the condition if you have it, is to eat a healthy, balanced diet.

When it comes to the first meal of the day, what should you eat?

Certain foods are recommended by experts to be better than other to eat – one of these being eggs.

One study claimed the proteins in eggs produce specific chemicals, that are know as peptides, which act as a similar way as common blood pressure medication.

“These peptides work to block the production of a chemical called angiotensin, which raises blood pressure.

“The study used a model of the human digestive system to show that fried and boiled eggs produced a significant amount of these angiotensin-blocking peptides.

“In fact, fried eggs appeared to produce even more than boiled.

“These findings suggest that eating cooked eggs may therefore have an effect at lowering your blood pressure.”