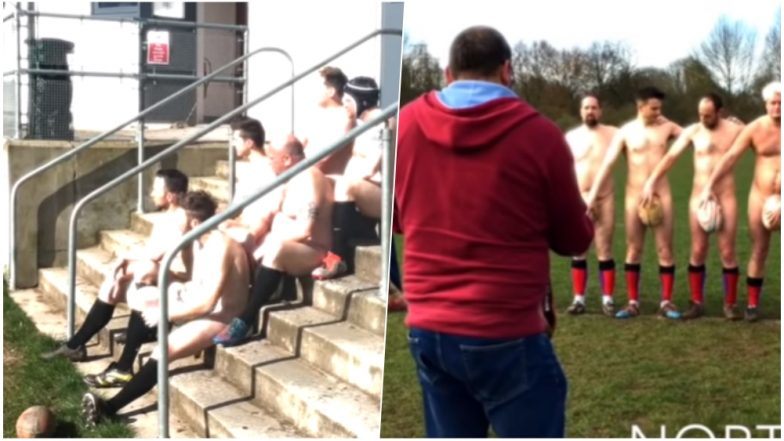 The end of the year, people start looking for buying new calendars. There are various 2019 calendars available in the market which centre around different social issues or give out messages. A group of Rugby players from Liverpool went a step ahead to spread awareness about testicular cancer. Shedding all their clothes, these players posed naked for The Naked Rugby Players calendar for 2019. From 6 rugby teams in the UK, players stripped to pose for each of the months. So players from Manchester Village Spartans, the Swansea Vikings, the Newcastle Ravens, the Kings Cross Steelers,  the Caledonian Thebans, and the Northampton Outlaws have all stripped for the noble cause. Chris Hughes Boldly Shows Off His Testicles in Live TV Show ‘This Morning’ to Raise Testicular Cancer Awareness; Watch Video.

The pictures show the team enjoying with a pint near the bar, roaming around naked in the clubhouse or just elegantly sitting in the changing rooms. All the six clubs from Liverpool are LGBTQ inclusive and they did not mind shedding at all to get the message out- that men need to keep checking their testicles for lumps. The groups also hope to raise awareness of LGBTQ inclusivity, regardless of their sexuality. There were a total of 71 gay and straight cisgender men took part in this project which was undertaken in partnership with Balls to Cancer charity. Vladimir Putin Poses Shirtless for 2019 Calendar, Photos Also Shows Cradling a Puppy (Watch Video).

Chris Berwick-Bryce, one of the players who bared it all was quoted to Liverpool Echo, “We took the photo in Heaven nightclub just outside the toilets. The club had been approached and asked if there was any interest from us in taking part. Enough of us thought ‘why not’ and took the opportunity. It’s helping the club and helping charity as well. It benefits teams like ours across the UK.” The speciality about shooting this calendar is the photographer was briefed to click the individuals as they were.

Photographer Monty McKinnen who shot these pictures said to The Daily Mail, “We didn’t want models, we wanted characters and, showing these characters in this artistic light, shows the beauty in us all. That which is in the eye of the beholder, sounds corny yes, but it’s a fact!” The calendar which is bound to set the temperatures raising is available for sale online.