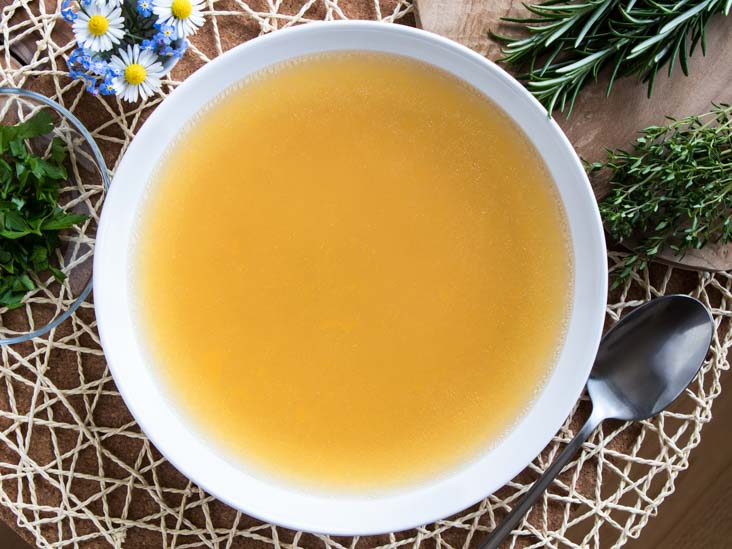 The GAPS diet is a strict elimination diet that requires its followers to cut out grains, pasteurized dairy, starchy vegetables and refined carbs.

It’s promoted as a natural treatment for people with conditions that affect the brain, such as autism.

However, it’s a controversial therapy and has been widely criticized by doctors, scientists and nutrition professionals for its restrictive regimen.

This article explores the features of the GAPS dietary protocol and examines whether there is any evidence behind its purported health benefits.

GAPS stands for Gut and Psychology Syndrome. It’s a term that was invented by Dr. Natasha Campbell-McBride, who also designed the GAPS diet.

Her theory is that many conditions that affect your brain are caused by a leaky gut. Leaky gut syndrome is the term used to describe an increase in the permeability of the gut wall (1).

The GAPS theory is that a leaky gut allows chemicals and bacteria from your food and environment to enter your blood when they wouldn’t normally do so.

It claims that once these foreign substances enter your blood, they can affect your brain’s function and development, causing “brain fog” and conditions like autism.

The GAPS protocol is designed to heal the gut, preventing toxins from entering the blood stream and lowering “toxicity” in the body. However, it isn’t clear if or how leaky gut plays a role in the development of diseases (2, 3).

In her book, Dr. Campbell-McBride states that the GAPS dietary protocol cured her first child of autism. She now widely promotes the diet as a natural cure for many psychiatric and neurological conditions, including:

The diet is most often used for children, especially those who have a health condition that’s poorly understood by mainstream medicine, such as autism. The diet also claims to help children who have a food intolerance or allergy.

It can be a years-long process, and requires you to cut out all foods Dr. Campbell-McBride thinks contribute to a leaky gut. This includes all grains, pasteurized dairy, starchy vegetables and refined carbs.

The GAPS protocol is made up of three main stages: the GAPS introduction diet, the full GAPS diet and a reintroduction phase for coming off of the diet.

The introduction phase is the most intense part of the diet because it eliminates the most foods. It’s called the “gut healing phase” and can last from three weeks to one year, depending on your symptoms.

This phase is broken down into six stages:

Read More:  Where are levitra capsules

During the introduction phase, the diet requires you to introduce foods slowly, starting with small amounts and building up gradually.

The diet recommends that you move from one stage to the next once you are tolerating the foods you have introduced. You are considered to be tolerating a food when you have a normal bowel movement.

Once the introduction diet is complete, you can move to the full GAPS diet.

Summary: The introduction phase is the most restrictive phase of the diet. It lasts up to one year and removes all starchy carbs from your diet. Instead, you’ll eat mostly broth, stews and probiotic foods.

The full GAPS diet can last 1.5–2 years. During this part of the diet, people are advised to base the majority of their diet on the following foods:

Followers of the diet can also eat moderate amounts of nuts and GAPS-recipe baked goods made with nut flours.

There are also a number of additional recommendations that go along with the full GAPS diet. These include:

While on this phase of the diet, you should avoid all other foods, particularly refined carbs, preservatives and artificial colorings.

Summary: The full GAPS diet is considered the maintenance phase of the diet, and lasts between 1.5–2 years. It’s based on animal fats, meat, fish, eggs and vegetables. It also includes probiotic foods.

If you’re following the GAPS diet to the letter, you’ll be on the full diet for at least 1.5–2 years before you start reintroducing other foods.

The diet suggests that you start the reintroduction phase after you have experienced normal digestion and bowel movements for at least six months.

Like the other stages of this diet, the final stage can also be a long process as you reintroduce foods slowly over a number of months.

The diet suggests introducing each food individually in a small amount. If you don’t note any digestive issues over 2–3 days, you may gradually increase your portions.

The diet doesn’t detail the order or the exact foods you should introduce. However, it states that you should start with new potatoes and fermented, gluten-free grains.

Even once you’re off the diet, you’re advised to continue avoiding all highly processed and refined high-sugar foods, retaining the whole-foods principles of the protocol.

Summary: This stage reintroduces foods that are not included in the full GAPS diet. You are advised to still avoid foods high in refined carbs.

The diet’s founder states that the most important aspect of the GAPS protocol is the diet.

Probiotic supplements are added to the diet to help restore the balance of beneficial bacteria in your gut.

It’s recommended that you choose a probiotic containing strains from a range of bacteria, including Lactobacilli, Bifidobacteria and Bacillus subtilis varieties.

You’re advised to look for a product that contains at least 8 billion bacterial cells per gram and to introduce the probiotic slowly into your diet.

People on the GAPS diet are advised to take daily supplements of both fish oil and cod liver oil to ensure they are getting enough.

The diet also suggests you take small amounts of a cold-pressed nut and seed oil blend that has a 2:1 ratio of omega-3 to omega-6 fatty acids.

The diet’s founder claims that people with GAPS conditions also have low stomach acid production. To remedy this, she suggests followers of the diet take a supplement of betaine HCl with added pepsin before each meal.

This supplement is a manufactured form of hydrochloric acid, one of the main acids produced in your stomach. Pepsin is an enzyme also produced in the stomach, which works to break down and digest proteins.

Some people may want to take additional digestive enzymes to support digestion.

The two key components of the GAPS dietary protocol are an elimination diet and dietary supplements.

As yet, no studies have examined the effects of the GAPS dietary protocol on the symptoms and behaviors associated with autism.

Because of this, it is impossible to know how it could help people with autism and whether it is an effective treatment.

Other diets that have been tested in people with autism, like ketogenic diets and gluten-free, casein-free diets, have shown potential for helping improve some of the behaviors associated with autism (4, 5).

But so far, studies have been small and drop-out rates high, so it’s still unclear how these diets may work and which people they may help (6).

There are also no other studies examining the effect of the GAPS diet on any of the other conditions it claims to treat.

The GAPS diet prescribes probiotics to restore the balance of beneficial bacteria in the gut.

Although the impact of probiotics on the gut is a promising line of research, there is currently little evidence in this area as it relates to the neurological conditions that the GAPS diet is claimed to treat (7, 8).

More high-quality studies are required before researchers can say whether bacterial strains play a role in the development of autism, and if so, who might benefit from probiotics (8, 9, 10).

However, studies to date have not observed that taking essential fatty acid supplements has an effect on people with autism. Similarly, studies on the effects of digestive enzymes on autism have had mixed results (11, 12, 13).

Overall, it’s not clear whether taking dietary supplements improves autistic behaviors or nutrition status. More high-quality studies are needed before the effects can be known (14, 15).

Summary: As yet, no scientific studies have examined the effects of the GAPS protocol on autism, or any other condition the diet claims to treat.

The GAPS diet is a very restrictive protocol that requires you to cut out many nutritious foods for long periods of time.

It also provides little guidance on how to ensure your diet contains all the nutrients you need.

Because of this, the most obvious risk of going on this diet is malnutrition. This is especially true for children who are growing fast and need a lot of nutrients, since the diet is very restrictive.

Additionally, those with autism may already have a restrictive diet and may not readily accept new foods or changes to their diets. This could lead to extreme restriction (16).

Some critics have voiced the concern that consuming large amounts of bone broth could increase your intake of lead, which is toxic in high doses (17).

However, the risks of lead toxicity on the GAPS diet have not been documented, so the actual risk isn’t known.

Summary: The GAPS diet is an extremely restrictive diet that may put you at risk of malnutrition.

Most people who try the GAPS diet are children with autism whose parents are looking to cure or improve their child’s condition.

This is because one of the main claims made by the diet’s founder is that autism is caused by a leaky gut, and can be cured or improved by following the GAPS diet.

Autism is a condition that results in changes to brain function that affect how the autistic person experiences the world. Its effects can vary widely, but, in general, people with autism have difficulties with communication and social interaction.

It’s a complex condition thought to result from a combination of genetic and environmental factors (18).

Interestingly, studies have noted that up to 70% of people with autism also have poor digestive health, which can result in symptoms including constipation, diarrhea, abdominal pain, acid reflux and vomiting (19).

A small number of studies have found that some children with autism have increased intestinal permeability (20, 21, 22).

However, the results are mixed, and other studies have found no difference between intestinal permeability in children with and without autism (20, 23).

There are also currently no studies that show the presence of leaky gut before the development of autism. So even if leaky gut is linked to autism in some children, it’s not known if it’s a cause or a symptom (24).

Overall, the claim that leaky gut is the cause of autism is controversial. Some scientists think this explanation oversimplifies the causes of a complex condition.

Moreover, the leaky gut explanation is not currently supported by scientific evidence.

Summary: Leaky gut is sometimes seen in some people with autism. However, there is currently little evidence that leaky gut causes it.

Some people feel they have benefited from the GAPS diet, though these reports are anecdotal.

However, this elimination diet is extremely restrictive for long periods of time, making it very difficult to stick to. It may be especially dangerous for the exact population it’s intended for — vulnerable young people.

Many health professionals have criticized the GAPS diet because there are no scientific studies that support its claims.

If you are interested in trying it, make sure you seek help and support from a medical professional.