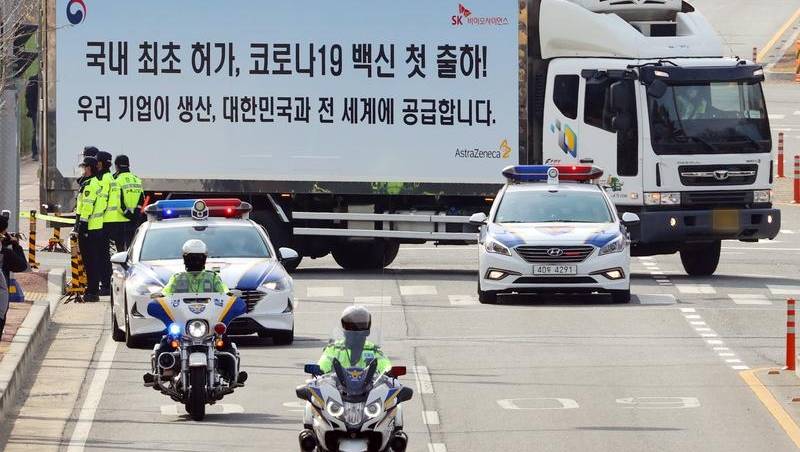 South Korea has begun transporting the first vaccine doses to roll off a production line in the southern city of Andong, where local pharmaceutical company SK Bioscience is producing the AstraZeneca vaccine.

The country will kick off its mass immunisation campaign on Friday by administering the Astra-Zeneca-Oxford vaccines to residents and employees at long-term care facilities.

Separately, some 55,000 doctors, nurses and other health professionals involved with treating COVID-19 patients will begin receiving shots of vaccines developed by Pfizer and BioNTech on Saturday.

Vietnam received a batch of 117,000 doses from South Korea, to inoculate more than 50,000 people who are seen as high risk, the government said in a statement.

The southeast Asian country with a population of 98 million has said it will receive 60 million vaccine doses this year, including half under the WHO-led COVAX scheme.

Vietnam was lauded globally for containing the virus for months using mass testing and strict quarantining, though has faced a recent new wave of infections.

Vietnam has reported 35 deaths due to the virus.

Malaysia launched its COVID-19 inoculation program on Wednesday, which authorities hope will rein in a spike in infections and help revive an economy that recorded its worst slump in over two decades last year.

Malaysia has set an ambitious target of vaccinating at least 80% of its 32 million people by February next year.

Prime Minister Muhyiddin Yassin was the first to be given the Pfizer vaccine, as part of government efforts to reassure people of the vaccine’s safety.

A spike in infections that started in September has placed Malaysia third in the region in total cases, behind Indonesia and the Philippines.

Thailand has received its first 200,000 doses of Sinovac Biotech’s CoronaVac, with inoculations set to begin in a few days.

Its mass immunisation campaign, which aims to administer 10 million doses a month, is slated to begin in June, using 26 million shots of AstraZeneca vaccines produced by local firm Siam Bioscience. It has also reserved a further 35 million doses of the vaccine.