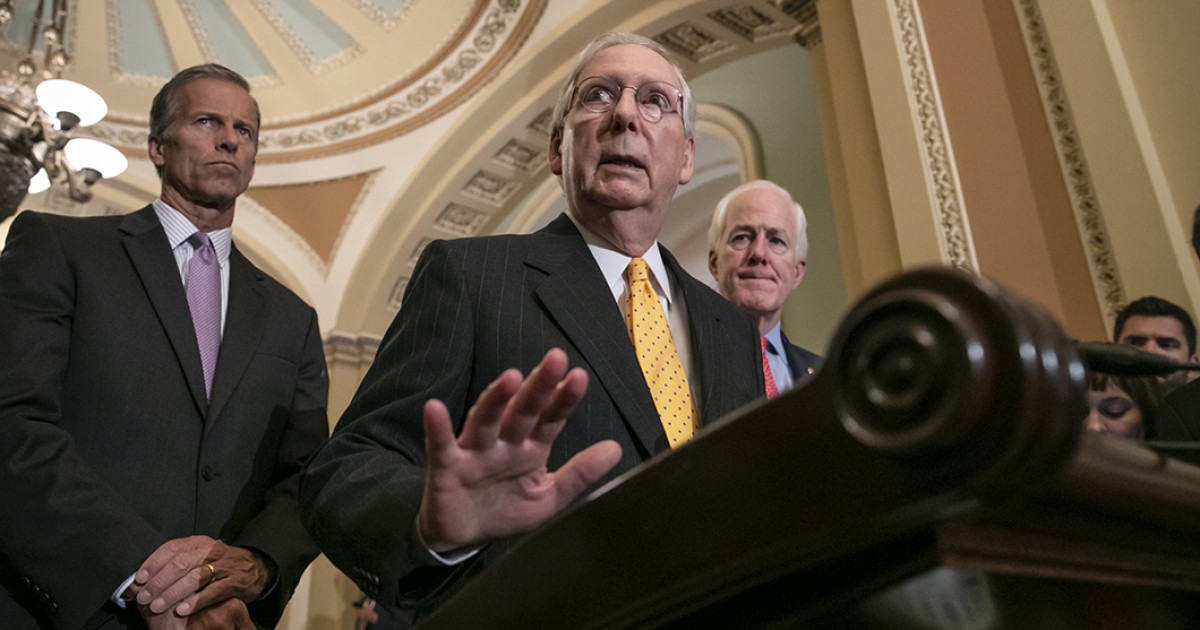 The Senate will vote this week on a massive bipartisan bill that combines 70 different measures aimed at reducing addiction and drug overdose deaths from opioids such as heroin and prescription painkillers.

The vote on the bill, the Opioid Crisis Response Act, is a culmination of months of hearings and negotiations across five committees. Supporters hope that the legislation will help reduce death tolls from opioid overdoses, which early data show surpassed 40,000 people in 2017.

The legislation provides more access to medical treatment for addiction, additional funding for states to carry out their programs, and gives the National Institutes of Health more power to carry out research on treatment for pain and addiction. It allows the Food and Drug Administration to limit how many prescription opioids, such as OxyContin, doctors are allowed to give patients, and to set guidelines for how they can be packaged so that they are harder for children to get.

The vote was announced Thursday by Senate Majority Leader Mitch McConnell, R-Ky., after he secured support from Democrats.

“The fact that so many senators across so many committees were able to put aside political differences to reach an agreement on this legislation, especially given our current political environment, speaks to the seriousness and pervasiveness of opioid and substance use disorders,” said Sen. Orrin Hatch, R-Utah, who chairs the Finance Committee.

After the bill passes, the Senate will go to conference with the House to hash out a final version that will be sent to President Trump. The lower chamber passed its massive opioid package in June, and the effort represents a rare win for both Democrats and Republicans as they head into November’s midterm elections.

“There is a bipartisan urgency to work with our House colleagues to get the legislation to the president’s desk,” said Sen. Lamar Alexander, R-Tenn., who chairs the Health, Education, Labor, and Pensions Committee.

An aide on the House Energy and Commerce Committee, which passed several bills in the lower chamber, said the committee was “pleased that the proposal received strong bipartisan support in the House and looks forward to working to ensure its inclusion in the final product.”

Though the packages have several common features, the Senate version does not include a provision to allow more hospitals to be reimbursed by the government for treating patients with addiction. Under current law, hospitals are only allowed to receive Medicaid money if they treat no more than 16 patients for addiction or mental health troubles at a time. The Trump administration has authorized several states to lift the limit, which would allow people to receive care who would otherwise be waiting in line, increasing their risk of overdose.

The Opioid Crisis Response Act also does not include a provision to help families access medical records for a patient with substance abuse disorder.

Both of these provisions were contentious in the House. Democrats raised concerns during hearings about privacy, and also said that people with addictions should receive care in the community rather than being institutionalized in a hospital. Still, the bills ultimately passed with Democratic support.

The final product involves the work of different Senate Committees, including HELP, Finance, Judiciary, Commerce, and Banking, and is meant to affect a slew of agencies.

Read More:  Most US opioid overdose deaths accidental, 4% are suicide

It includes the Synthetic Trafficking and Overdose Prevention Act, or STOP Act, which gives the Postal Service more tools to flag suspicious shipments of illicit fentanyl from overseas. This bill had the vocal support of Trump and was introduced by Sen. Rob Portman, R-Ohio.

“Across Ohio, what I hear as I meet with those on the frontlines of this crisis is that we need to combat the influx of fentanyl if we truly want to overcome this epidemic,” Portman said. Without his legislation, he warned, drug traffickers would continue to take advantage of a loophole in mail screening.

The Trump administration has said that addressing the epidemic is a national priority. Trump has declared the crisis a “public health emergency” and Congress set aside $ 4.7 billion in funds earlier this year to combat the crisis.