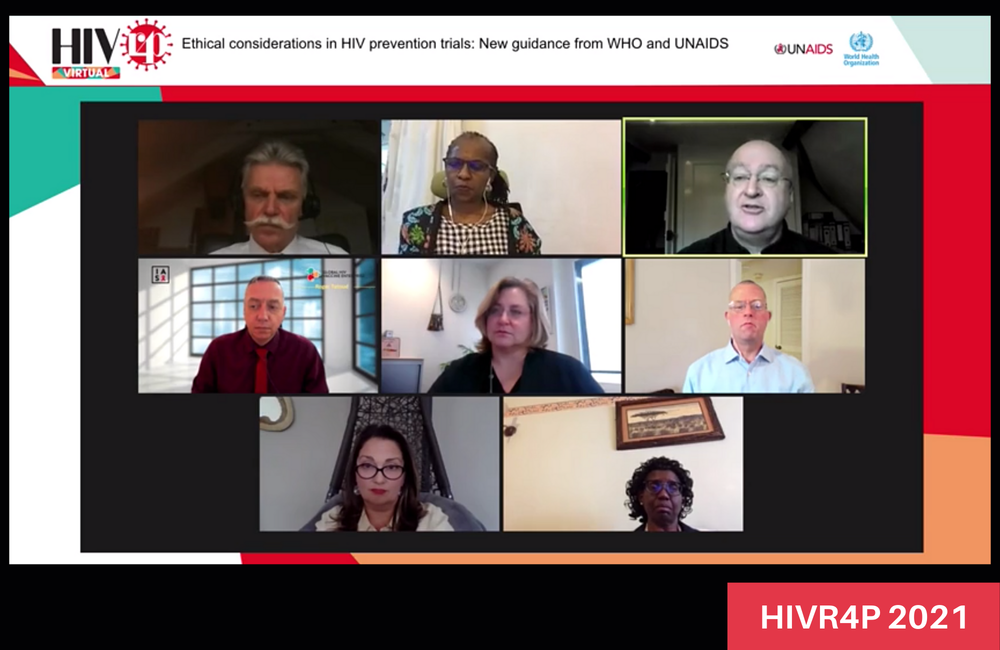 A full package of effective prevention interventions, up to international standards, must be offered to people taking part in HIV prevention trials, say UNAIDS and WHO in new guidance issued this week. This means that if researchers want to run a study in a country in which PrEP is not routinely available, they must find a way to provide it to study participants. If the study demonstrates that a new product is effective, the researchers have new obligations to provide it to study participants at the end of the trial and help make it available to the wider population.

The guidance represents a considerable strengthening of researchers’ ethical responsibilities to study participants and their communities. The Joint United Nations Programme on HIV/AIDS (UNAIDS) and the World Health Organization (WHO) last issued recommendations on HIV prevention trials in 2012 and launched their update at the virtual HIV Research for Prevention conference (HIVR4P) yesterday.

In prevention trials, it is a long-established principle that all participants should have access to effective prevention methods that already exist. While the study may randomly allocate participants to receive either a new prevention product or a placebo, they will all also be provided with condoms and STI treatment. However, the methods provided have often been those that are routinely available in the country at the time, rather than all the effective methods. This gap has become apparent with pre-exposure prophylaxis (PrEP).

Refers to the mouth, for example a medicine taken by mouth.

A month-long course of antiretroviral medicines taken after exposure or possible exposure to HIV, to reduce the risk of acquiring HIV.

Social attitudes that suggest that having a particular illness or being in a particular situation is something to be ashamed of. Stigma can be questioned and challenged.

An umbrella term for people whose gender identity and/or gender expression differs from the sex they were assigned at birth.

The new guidance clarifies that researchers must ensure access to the full package of prevention methods recommended by WHO. At the time of writing, this includes male condoms, female condoms, lubricants, post-exposure prophylaxis (PEP), oral PrEP, vaginal rings, STI treatment and male circumcision (in eastern and southern Africa only). If new products are added to the package in the future, ongoing research studies should make them available as soon as practicable.

Any departure from this package needs to be based on a compelling rationale and be approved by community representatives and other stakeholders. One example could be studies of injectable PrEP, in which the product has a similar mode of action to oral PrEP, so it is not appropriate to provide both to the same person. Another is to recruit individuals who have decided not to use a recommended product. For example, in the Mosaico vaccine trial, all potential participants are offered oral PrEP and only those who choose not to take it are actually recruited.

A recurrent question raised by community advocates has been access to study products after a trial ends. For example, four-fifths of the participants in iPrEx (the first study to show PrEP’s effectiveness) were in Peru, Ecuador and Brazil, but it took several years for PrEP to be made available there.

Now there need to be plans for post-trial access, should the intervention prove to effective. There needs to be one plan for ongoing access for all trial participants, and another for introduction of the product in the wider community. Researchers and trial sponsors should agree these plans with governments, local health authorities, the pharmaceutical industry, community representatives and other partners before the trial starts. The plan for the introduction of a new product to the wider population will need to address complex issues of manufacturing, regulatory approval and distribution channels.

“If researchers want to run a study in a country in which PrEP is not routinely available, they must find a way to provide it to study participants.”

Had this guidance been followed, tenofovir alafenamide/emtricitabine (Descovy) would probably not initially have been tested for PrEP only in men who have sex with men and transgender women. The guidance also allows for more inclusion of pregnant women in studies.

The document calls for researchers to be mindful of the fact that people at higher risk of acquiring HIV often live in social or political contexts that make them vulnerable to stigma, exploitation, criminalisation and other harms. Research protocols must describe the safeguards that will be put in place to create a safe, enabling environment for trial participation.

“This guidance sets out how to carry out ethical trials on HIV prevention while safeguarding the participants’ rights during scientific research and promoting the development of new HIV prevention tools,” said Professor Peter Godfrey-Faussett of UNAIDS.