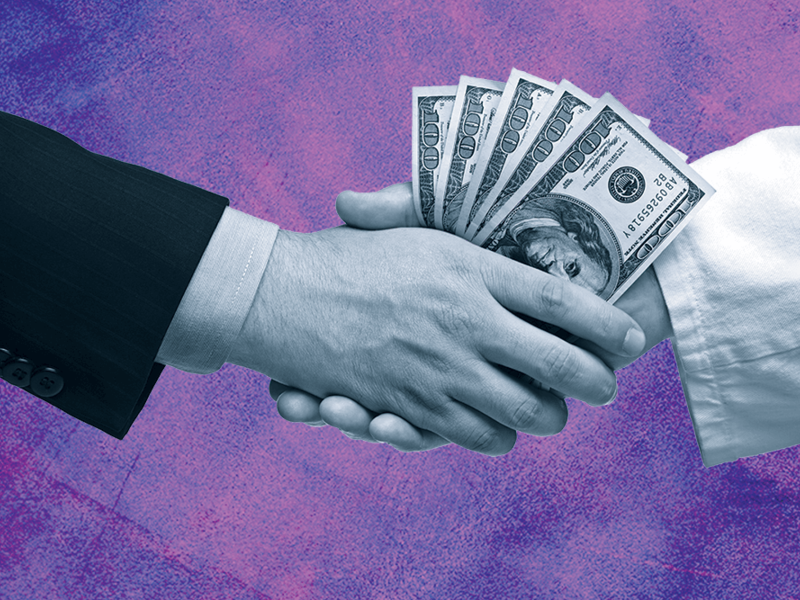 Despite all its bad news, 2020 has been a good year for burgeoning healthcare companies that have capitalized on the meteoric rise of shell companies pouring billions of dollars into taking them public.

This year’s market uncertainty, among other factors, has prompted an explosion in initial public offerings among so-called special purpose acquisition corporations, companies that raise money through IPOs and, within two years, spend that money acquiring other companies and taking them public. In the third quarter of 2020 alone, 114 SPACs filed IPOs worth a cumulative $ 37 billion, compared with eight IPOs worth roughly $ 2 billion in the prior-year period, according to an RSM analysis of Bloomberg data

“This year versus the last five years, it’s been really at an all-time high,” said Jenny Watson, vice president with Cain Brothers.

While RSM’s analysis isn’t broken down by industry, healthcare has clearly been a big beneficiary. On Tuesday, Medicare Advantage startup Clover Health announced it will go public through a $ 3.7 billion merger with the SPAC Social Capital Hedosophia Holdings Corp. III. Last week, telehealth provider Hims, Inc. said it will go public through a $ 1.6 billion combination with Oaktree Capital Management, also a SPAC. In July, acute-care telemedicine provider SOC Telemed revealed it, too, will go public using SPAC Healthcare Merger Corp. in a combination worth $ 720 million.

The investment bank Jefferies said Tuesday there have been 16 SPAC transactions focused on the healthcare industry so far 2020.

In their IPO paperwork, SPACs outline the type of company they’re looking to buy, such as health IT or life sciences. Federal securities law prohibits them from naming specific targets or reaching out to target companies before they go public.

The shift to telehealth during the COVID-19 pandemic has shown digital health technology to be indispensable and has triggered a wave of renewed interest among investors.

Countless patients and providers have used digital health services for the first time during the pandemic, and have realized it can work in many cases, Wolf said. Other aspects of patients’ lives, such as shopping, school and dining are customized and convenient.

“Except perhaps the most important part of our lives,” he said. “People are recognizing this and pouring money into it.”

There’s a number of reasons behind the recent rise in SPAC IPOs. Perhaps the biggest is the pandemic-induced volatility in the stock market and leveraged loans market. With many companies struggling to raise capital the old-fashioned way, they’ve turned to SPACs.

The typical IPO process involves a lot of risk, cost and time. First off, there’s a drawn-out underwriting process where bankers price the shares. Executives then hit the road to charm investors. After all that, they could have a bad day when their stocks officially hit the market, said Albert Vanderlaan, a partner in Orrick’s technology companies and capital markets groups.

“They’ve effectively de-risked and taken the IPO book-building process of out of it without having to go through that level of uncertainty that’s attributed to the capital markets for an IPO,” he said.

Read More:  Can you overdose on abilify?

With a SPAC, the process of going public is faster and quieter, Wolf said.

“There’s a lot of uncertainty with the traditional IPO process,” he said. “But with the SPAC, you’ve already raised all this money and you just come up to me and say, ‘We’ll buy you.’ It’s more of a private conversation.”

Another factor is the uptick in public market valuations. While previously there wasn’t much added benefit to going through the IPO process, valuations being at an all-time high means more companies want to tap into that, Watson said. The temporary closure of the leveraged loans market in the second quarter also made it very difficult to execute private equity buyouts, she said.

Another plus for SPACs is the fact that more reputable names are getting involved, as opposed to the 1990s and early 2000s, Vanderlaan said. Prominent hedge fund manager Bill Ackerman, for example, announced a $ 4 billion IPO for his SPAC, Pershing Square Tontine Holdings, Ltd., in July. And private equity firm Apollo Global Management’s SPAC, Apollo Strategic Growth Capital, filed for an IPO worth $ 750 million last month.

Investors tend to feel more secure putting their money in SPACs because SPACs are required to spend the money raised through their IPOs within two years or return it to their investors, said John Washlick, a shareholder with Buchanan, Ingersoll & Rooney. They’re also limited in how they can spend the money.

That said, investors still need to research the executives behind any SPAC they consider buying into, Washlick said. Investors should make sure those involved have good track records, especially in the industry they’re targeting.

“Raising money is one thing, but what are you going to do with it?” he said. “How are you going to spend it responsibly so that my $ 10 becomes more than $ 10? I’m looking for a return on it, not to give it back.”

Due diligence is equally important for companies looking at merging with SPACs. Experts recommend companies get a capital commitment and assurance they’ll be able to keep their management team.

Many SPACs are subsidiaries of private equity firms. Much like private equity buyouts, there is wide variation in how much involvement the new owners will have in their companies, Watson said. Today’s SPACs tend to be led by industry insiders who have expertise in the areas they’re targeting, which can be a boon to the companies they buy. “Some are very hands on,” Watson said. “Some make the investment and sit in the background.”

For private equity-owned SOC Telemed, which provides telemedicine to more than 500 hospitals in 47 states, having access to the healthcare industry expertise within Healthcare Merger Corp.’s executive ranks was one draw behind the deal, said Paul Ricci, SOC Telemed’s interim CEO. Another obvious one was the rapid access to capital, he said.

“Virtualized care became an important element of dealing with the pandemic and the pandemic revealed to people how flexible this class of care delivery is,” Ricci said, “and therefore I think there is an accelerated focus on investments behind it.”