If stress is making you feel overwhelmed, it could be down to your everyday thinking patterns, says a leading happiness researcher who has a few simple mindset shifts to help

How happy are you? If the answer is, ‘Meh! Who’s happy?’ you’re not alone.

But why is it that, despite our relative prosperity as a nation and our own individual success, so many of us report low contentment? One happiness researcher explains this with a startling claim – that the very qualities that make us successful can also be those that lead to unhappiness.

Raj Ragunathan is a happiness researcher and associate professor of psychology at the University of Texas McCombs School of Business where he has taught over 100,000 students a course called ‘What are the determinants of a fulfilling and happy life?’.

Over five years, he conducted research on 1500 of his smart and successful students, those with superior IQs, greater drive, high critical thinking ability and a better work ethic – with a ‘Mental Chatter Exercise’ in which they kept a brutally honest diary of their thoughts for two weeks.

The students expected 60-75 per cent of their thoughts to be positive but the majority, 50-70 per cent, were negative.

‘Their negative mental chatter almost always fell into three main categories, feeling inferior, lack of love and connectivity with others and lack of control over themselves and other people,’ explains Prof. Ragunathan.

In his book Ragunathan deconstructs the traits of successful people that can get in the way of their happiness and explains what to do instead. Here are three examples:

Stress mindset #1: A need for control 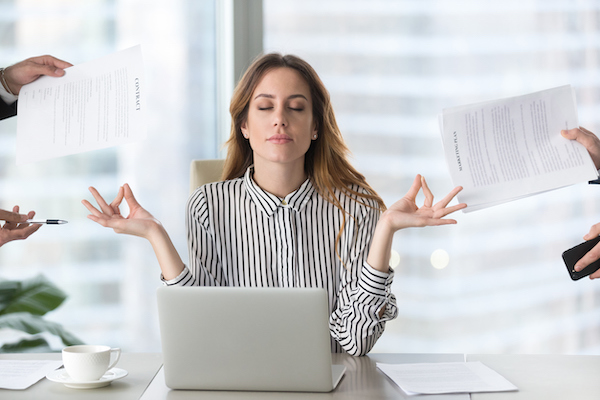 By giving up your need to control everything, you might find you’re not only calmer but also more productive

It’s a familiar scenario either in ourselves or other successful people; the need to control other people and situations and it’s worse if you’re a ‘maximizer’, someone with the irrepressible urge to make things better. It leads to unhappiness in two ways.

First, trying to control someone’s behaviour leads to ‘psychological reactance’, when people do the opposite (you attempt to control your spouse’s diet and he/she responds with pizza binges to spite you).

Second, it leads to ‘power stress’, where you get angry and frustrated when others don’t behave how you want them to. Plus, our decision-making suffers because we drive away those who disagree with us and surround ourselves with only those that don’t mind being controlled; yes people.

Read More:  Johnson & Johnson vaccine may be linked to anxiety and fainting, according to CDC

What to do instead – Build your internal control muscle

Countless studies have found that being in control of ourselves rather than others – internal control – leads to increased levels of happiness.

Developing internal control is like a muscle, the more you exercise it, the more it builds and starting small is best.

Rather than asking yourself whether you could control yourself if you lost all your money or a limb, practice maintaining internal control when tiny things disappoint you such as rain on your holiday or your kid bawling their head off in public.

Try labelling your emotions, without trying to control the situation or person and then moving on. For example, ‘I’m feeling frustrated because I’m stuck in traffic, but that’s okay because I can’t control that.’

Stress mindset #2: The need for superiority

Valuing yourself self worth based on your materialistic value can leave you feeling stressed. Numerous studies have found that those that are higher in status are more physically and emotionally healthy.

One set of studies that began in the 1960s and continue to this day, known as the Whitehall studies, found that, despite receiving identical medical attention, those lower in status are sick for longer and suffer more emotional negativity than those in high status.

But striving too hard for superiority can make us unhappy. First, it can lead to mimicking the competition which minimises our authenticity. Your neighbour runs 100 metres in 20 seconds, so you focus on running it in 12 to beat him.

But you’re much better off having an internal yardstick for comparison or you’ll be tempted into moving away from your own strengths to do what he does which is shown not to work.

Plus, superiority is hard to measure – how do you know you’re the best drummer or teacher or soldier out there? So we use ‘extrinsic markers’ such as fame or wealth to measure our status. That makes us materialistic and numerous studies have found that as materialism goes up, contentment goes down.

Read More:  How can anxiety hurt you

What to do instead – Practice extrinsic gratitude

Gratitude lists are all the rage because they’re proven to work.

But an important distinction to stop you striving to be superior is rather than emphasise how well you have done and what a great job you did, practice being grateful for all the small things and people that came together to bring you a favourable outcome.

That kind of extrinsic gratitude connects you to people where striving for superiority can isolate you (especially if you’re always going on about your achievements!). 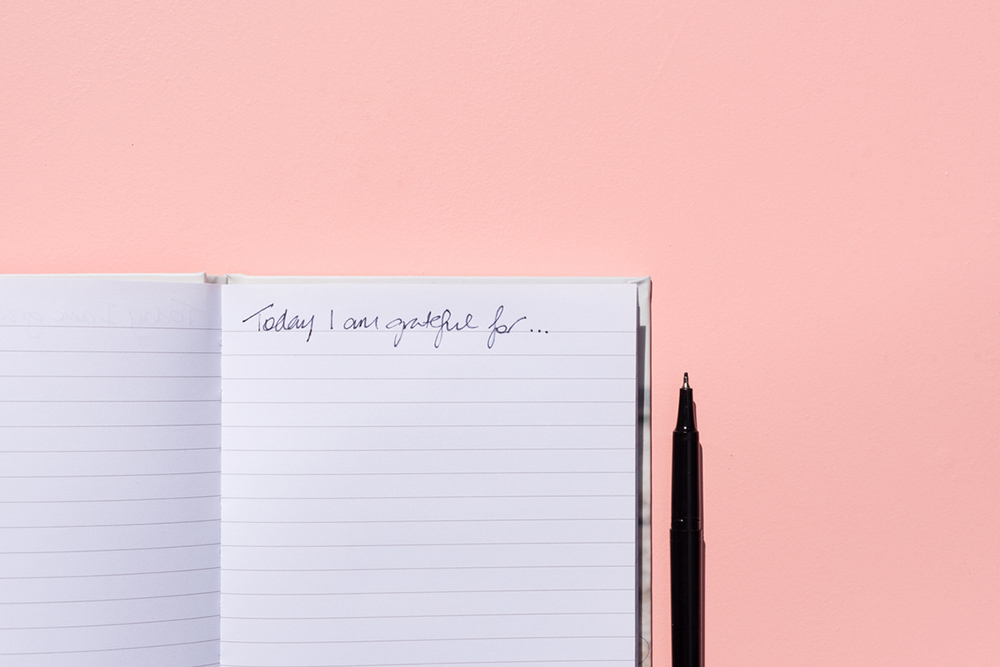 Giving thanks has been proven to make you happier

Try self-compassion. This is being pioneered by Dr Kristin Neff at the University of Austin, Texas who asserts that when you experience a failure or let down, treat yourself like you would a good friend.

You can even write that friend an email or letter explaining why they needn’t feel ashamed or disappointed for whatever mistake they made. It’s touchy-feely but proven to work.

Stress mindset #3: Wanting to be loved

Those in intimate, long-term relationships with a significant other fare well in the happiness stakes and love and connection has been shown in studies to be a critical human need.

But for many people who strive for success before happiness, a healthy need for connection can become neediness; a desperation to be loved.

In studies, high levels of neediness co-relate to unhappiness, anxiety and depression and can make us overly bothered about what others think, causing a desperate desire for attention.

This can manifest as a hunger for fame, achievement or accolades and become a self-fulfilling prophecy by turning people off being around you and triggering loneliness which in turn leads to more neediness.

What to do instead  – Be an otherish giver

While the successful and miserable tend to show desperation and neediness for love from others, the happy and successful tend to focus on the need to love and give. 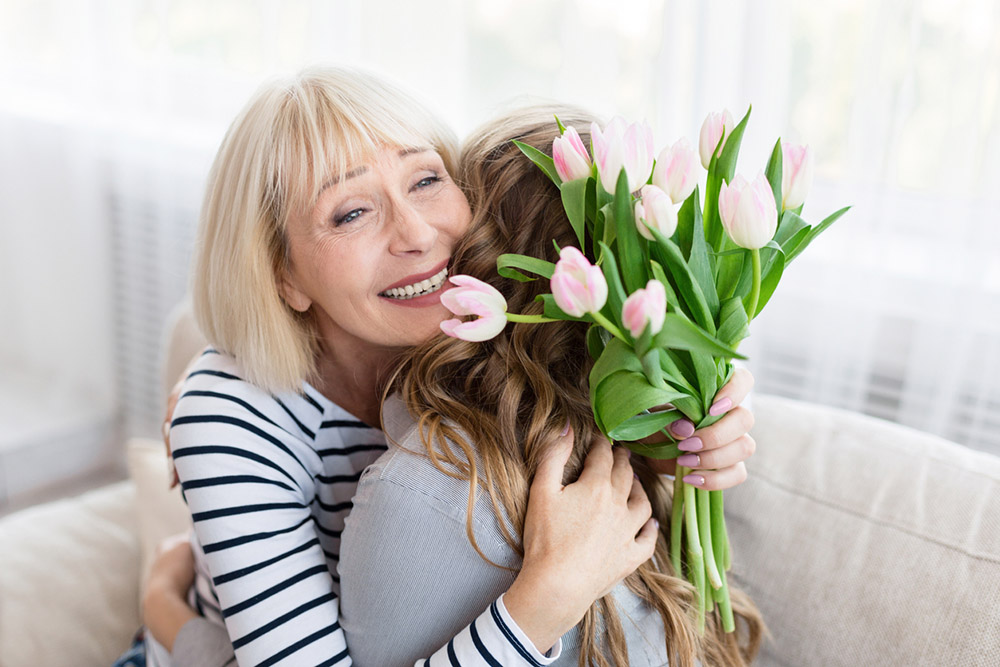 Research (and a great TED talk by business psychologist Adam Grant, author of Give and Take: Why Helping Others Drives Our Success

asserts that giving more – materially and emotionally – can make us happier.

But he distinguishes between selfless givers who give so indiscriminately that they burn out and otherish givers who are more likely to be successful because while they strive to improve others’ welfare by giving, but focus on taking care of themselves as well (and don’t want or expect returns).

But, will it make me happy? Here’s what science has to say…

Warwick University research has identified a U-shaped curve in happiness levels over lifetimes starting out high in people’s 20s, then hitting an all-time low at around 46 before rising again in later decades.

An ONS survey this year found those aged 45-59 reported the lowest life satisfaction while happiness peaked between 65 and 79.

MONEY? To a point.

Research presented to the American Psychological Association in 2014 found that emotional wellbeing increases with income but only up to a £45,000 when most people’s basic needs are met, then it stalls.

‘We get more satisfaction from developing mastery over something if that corresponds with our talents and abilities and helps us experience the phenomenon of flow – when time stands still because you’re enjoying something so much’, says Prof. Ragunathan.

One 75-year study at Harvard Medical School tracked 268 men from 1938 to the early 2000s found that the strength of their social relationships was the only characteristic that determined the happiest ten per cent from the rest.

Research released this month from Cambridge University found that those who spent their money in keeping with their personalities were happier.

So, when introverts spent at bookstores for example, and extroverts at bars, both groups were happier. 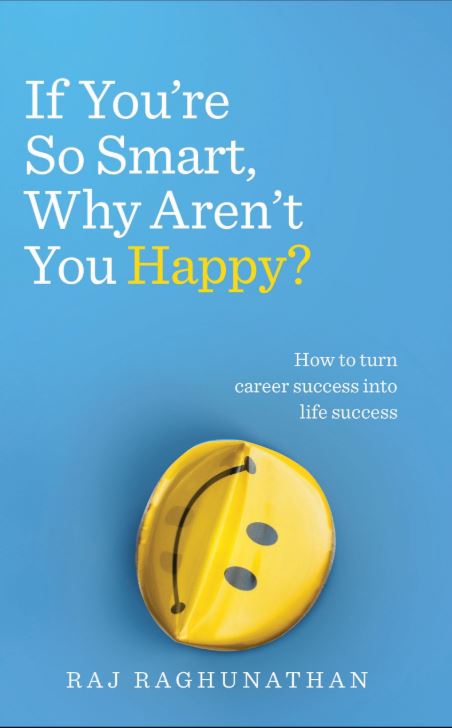 If you’re so smart, why aren’t you happy? How to turn career success into life success  £12.99 by Professor Raj Ragunathan is published by Ebury is available to buy on Amazon.

The calming breathing technique to de-stress you in one minute

13 instant stress fixes you can do at your desk

How to relieve stress with hand reflexology

‘Should I confess my affair?’

Got Imposter Syndrome? This therapist’s guide will help you deal with it