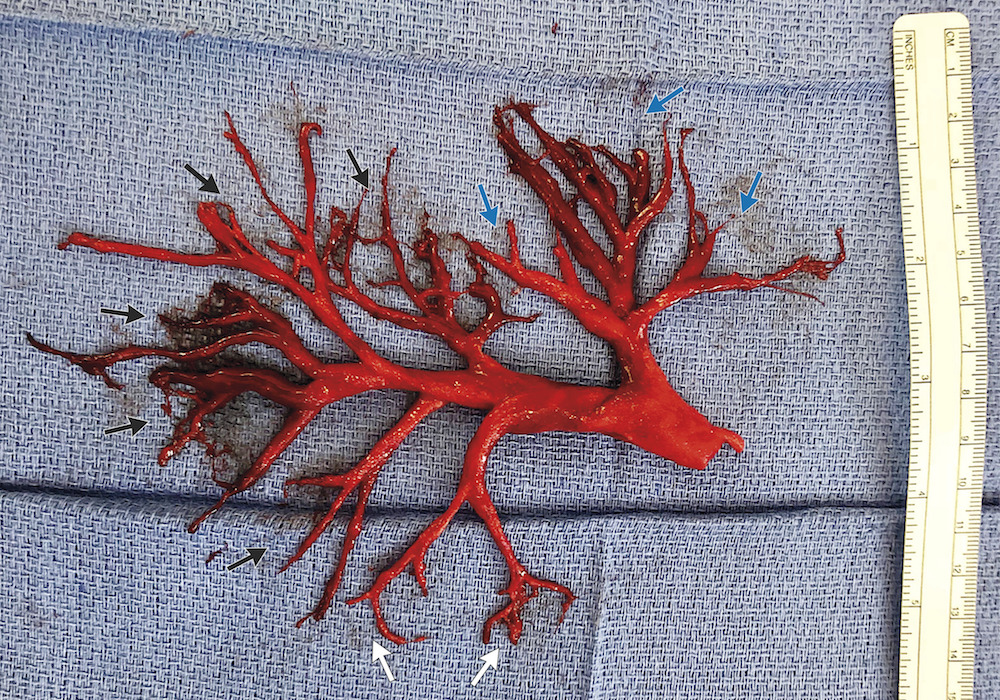 A man undergoing treatment for heart failure coughed up an enormous, intact blood clot that formed a perfect cast of the air passageways of his lung.

The completeness of the clot, once unfolded onto blue medical cloth, astounded doctors; they could trace the three branches of the upper lobe of the lung, the two branches in the middle lobe and five segmental branches in the lower.

Spanning about 15 cm by 17 cm, it was such a perfect cast of airways that they knew precisely where the clot had come from, the right bronchial tree of the patient’s lung.

Although called a tree, it more resembles roots. Imagine tugging on a robust dandelion when suddenly the entire intricate root system slips out of the ground without bits snapping off as it came.

Rather than doctors pulling the red, bloody mass out of the patient’s lung, however, the man unexpectedly hacked it out himself, as the doctors later noted: “During an extreme bout of coughing.”

The strange sample of a medical anomaly prompted two of his doctors at the University of California, San Francisco — Gavitt Woodard, a thoracic surgeon, and Georg Wieselthaler, the cardiothoracic surgical chief — to write a note on the case, published this week in the New England Journal of Medicine.

The public’s response has been a mixture of wonder and horror.

Various media reports have twisted the science of the thing, presenting it as a patient literally coughing up a lung, a common expression for what it feels like to cough profusely.

“Man coughs up part of lung while being treated for heart failure,” says a Fox News headline, failing to note or notice that it is a cast of the inside of the lung — like pouring concrete into a mold and then removing the mold, only with blood rather than concrete — that came out of his mouth, rather than the lung itself.

The Daily Mail Online even capitalized their misdirection in its headline, “Man, 36, coughs up part of his LUNG,” it says.

The intricate expectorate is where blood leaked into the air passages of the patient’s lung and hardened, what is medically called coagulation. The solidifying blood provoked intense coughing to clear them. And clear them it did.

Any relief from the productive coughing did not last, however. The patient was already dying from heart failure. Despite intervention, he died nine days after hacking out the clot.

The doctors do not identify their patient by name, but say it was a 36-year-old man being treated in the intensive care unit, suffering from chronic heart failure.

He had considerable intervention, including an aortic-valve replacement, stenting of an aortic aneurysm and a permanent pacemaker had been implanted for complete heart block.

The unusual clot is likely explained by the next intervention.

Doctors placed an Impella ventricular assist device into his heart through an artery, which is a heart pump that temporarily supports a patient by moving blood through the heart to the rest of the organs in the body. According to the manufacturer’s website, it is a treatment designed for “no-option patients.”

Blood clots are a known possible side effect of the pump.

“Blood clots may develop, which can travel through your blood vessels and block the blood flow to other organs, including your lungs making breathing difficult,” according to the Impella website.

To reduce clotting, doctors use a blood thinner called heparin.

Over the next week, the patient had periodic coughing fits, hacking up small amounts of blood or blood-stained mucus, the doctors wrote in their published case note.

He had increasing trouble breathing and needed supplemental oxygen to ease it.

“During an extreme bout of coughing, the patient spontaneously expectorated an intact cast of the right bronchial tree,” the doctors’ wrote.

Tubes were inserted down his throat and a scope used to examine the patient’s airways. Two days later, the tubes were removed and he had no further bloody coughing, the doctors wrote.

A week later, however, the patient died from complications of heart failure.