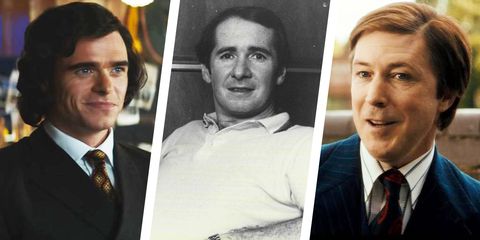 John Reid may not be a name as embedded in the lore of popular music history as “Elton John” or “Queen,” but he’s a key figure in the story of both of those classic acts. And, weirdly enough, the cinematic connection of Reid—in last year’s Queen biopic Bohemian Rhapsody, and this year’s Elton flick, Rocketman (which opens Friday)—goes a level deeper: Reid is played in each film by a different actor best known from Game of Thrones.

Reid, who managed Queen from 1975 until 1978, is portrayed in Bohemian Rhapsody by Aidan Gillen, who’s appeared in The Dark Knight Rises, Shanghai Knights, and Peaky Blinders, but is best known for his role as the kiniving Littlefinger in Thrones.

Meanwhile, Reid will presumably play a bigger role in Rocketman, where he’ll instead be played by Richard Madden. Madden won a Golden Globe this year for his role in Netflix’s Bodyguard, appeared in the same network’s movie Ibiza, and is rumored to be joining the Marvel Cinematic Universe, but is still best known for his role as Robb Stark in HBO’s epic series. Elton John (then known as Reg Knight) was both Reid’s lover, and his first client. He represented the bespectacled musician for 28 years, in a professional relationship that ended in legal action—so you know Rocketman‘s storyline may delve a little deeper than Rhapsody‘s did.

In an even deeper coincidence than simply the two Reid actors at one point sharing a residence in Westeros, you may recall that Dexter Fletcher was hired at one point to finish up the direction of Bohemian Rhapsody after Bryan Singer was fired from the film. Who directed Rocketman, you might ask? Why, Dexter Fletcher, that’s who.

While the movies do have quite the crossover, there are also a few key differences, though. Taran Egerton is actually doing the singing in Rocketman, while Rami Malek was lipsyncing for his portrayal of Freddie Mercury. Elton John fought to ensure that Rocketman would receive a true-to-life R-rating from the MPAA—Bohemian Rhapsody, against the wishes of quite a few, was cut down to a more family-friendly PG-13. Fletcher and Egerton have both been eager to point out that the pair are in fact very different films.

Bohemian Rhapsody won four Oscars this past winter—we’ll see in about nine months if Rocketman can follow in its path.

Evan Romano Evan is an associate editor for Men’s Health, with bylines in The New York Times, MTV News, Brooklyn Magazine, and VICE.