29-year-old fitness model gets breast implants removed after she says the silicone gave her seven years of ‘brain fog, bald spots and rashes’

A fitness blogger said she had her breast implants removed because the silicone was ‘poisoning’ her.

Sia Cooper, the 29-year-old behind the blog Diary of a Fit Mommy, revealed she got implants in October 2011 to boost her self-confidence after weight loss left her with small breasts.

However, over the next seven years, the Florida mother-of-two struggled with extreme fatigue, facial rashes, chest pain, brain fog and even hair loss.

After undergoing multiple blood tests, diagnostic tests and X-rays that came back negative, Cooper was convinced her symptoms were related to what described as  ‘breast implant illness’.

Cooper told DailyMail.com that she decided to get her implants removed just two weeks ago and, ever since she did, her skin rashes have cleared up, she’s lost weight and has more energy. 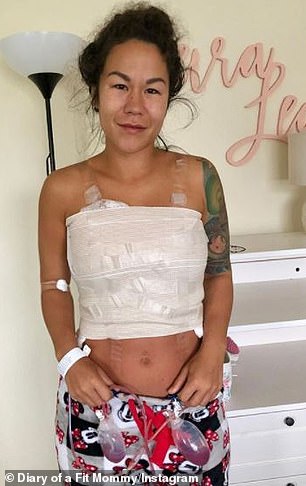 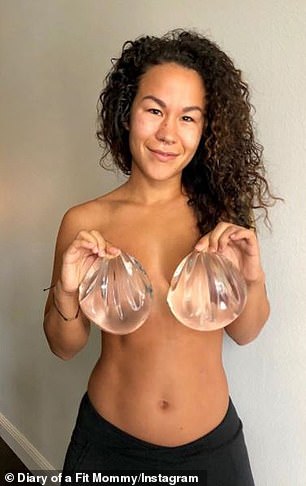 Sia Cooper, 29 (left and right), a fitness blogger from Florida said she had her breast implants removed because the silicone was ‘poisoning’ her. She decided to get implants in October 2011 after losing around 45 pounds and being left with ‘non-existent’ breasts 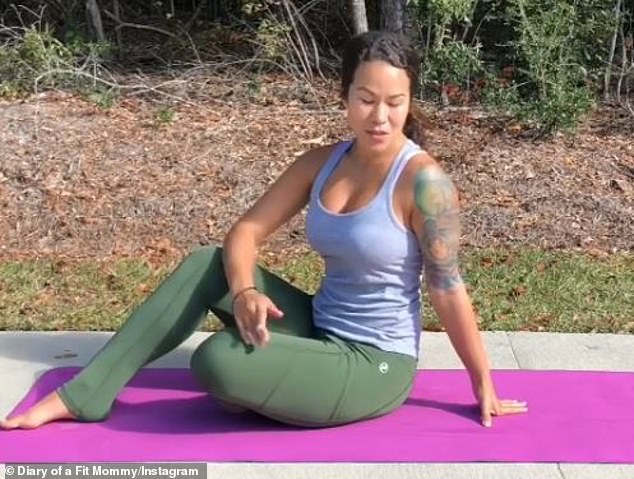 Cooper opted to get 400 cc silicone gel implants, which were inserted through her armpits without leaving any scars and left her with a 32DDD/34DD cup size

Cooper decided to get implants in October 2011, after she lost around 45 pounds and was left with ‘non-existent’ breasts.

‘I’d recently gone through a pretty hefty loss from 150 pounds to 105 pounds and I didn’t feel confident,’ she told DailyMail.com.

‘My husband at the time saw I was unhappy and suggested I should get implants to jazz up our sex life.’

The most popular implants approved by the US Food and Drug Administration (FDA) are silicone implants and implants filled with a saline solution.

For breast reconstruction, the rebuilding of a breast, both implants are approved for women of all ages.

Cooper opted to get 400 cc silicone gel implants, which were inserted through her armpits without leaving any scars and left her with a 32DDD/34DD cup size.

When she woke up after surgery, Cooper said it felt like ‘an elephant sitting on my chest’.

Cooper said she didn’t experience any other symptoms until about a year after surgery. 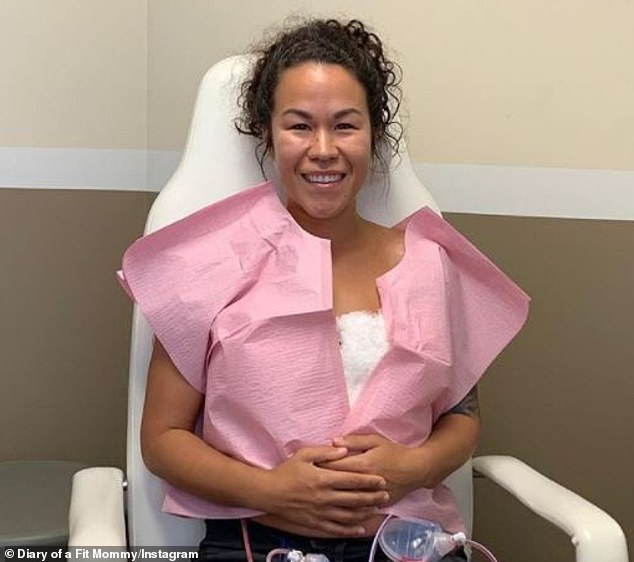 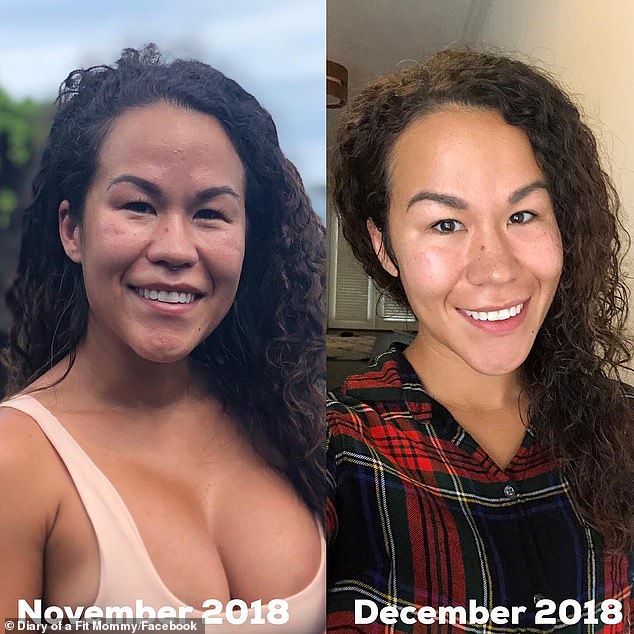 First there was the fatigue that left her sleeping sometimes between 12 and 14 hours per day.

Read More:  Why do cyclists use tramadol

Then, she started losing her hair in clumps after her first son was born in 2014 – three years out from her cosmetic surgery.

‘I was told postpartum hair loss is normal but temporary,’ Cooper said.

‘It didn’t go away. I was checked for hormone imbalance and hyperthyroidism but was told I was fine.’

In addition, she experienced rashes on her face and back, a 20-pound weight gain and constant joint inflammation.

‘I just chalked it up to aging but, at the same time, I’m 29 I shouldn’t be having this problem.’

Over the summer, in an unrelated Instagram post, she revealed to her followers that she’d had a breast augmentation.

‘They started pointing out breast implant illness to me,’ she said. ‘And I started thinking: “Maybe this is it.” Because all these blood tests, diagnostic tests were coming back negative.

The FDA does not recognizes breast implant illness as a diagnosis but, on its website, urges doctors to not dismiss patient concerns until ‘much larger and longer’ studies are conducted.

In the early 1990s, the FDA prohibited silicone implants after several health concerns were raised about their association to a risk of cancer, connective tissue disease and autoimmune diseases.

No research established a definitive link between silicone implants and these conditions.

After silicone implants from two manufacturers were approved in 2006, the FDA conducted many post-approval studies, but no researchers had analyzed the database. 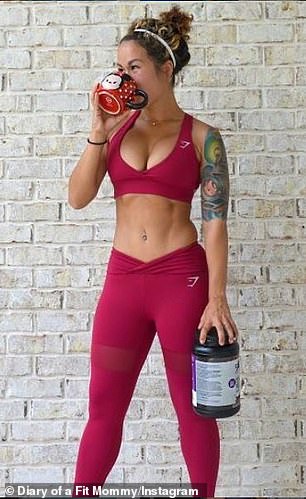 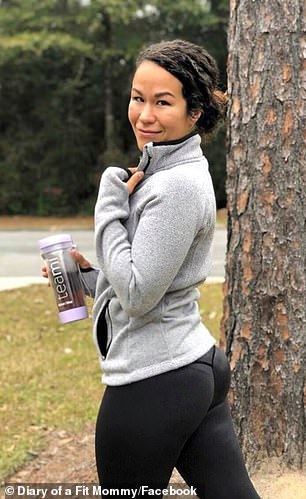 After undergoing multiple blood tests, diagnostic tests and X-rays that came back negative, Cooper (left and right) was convinced her symptoms were related ‘breast implant illness’. She traveled to Newport Beach, California, two weeks ago to undergo explant surgery 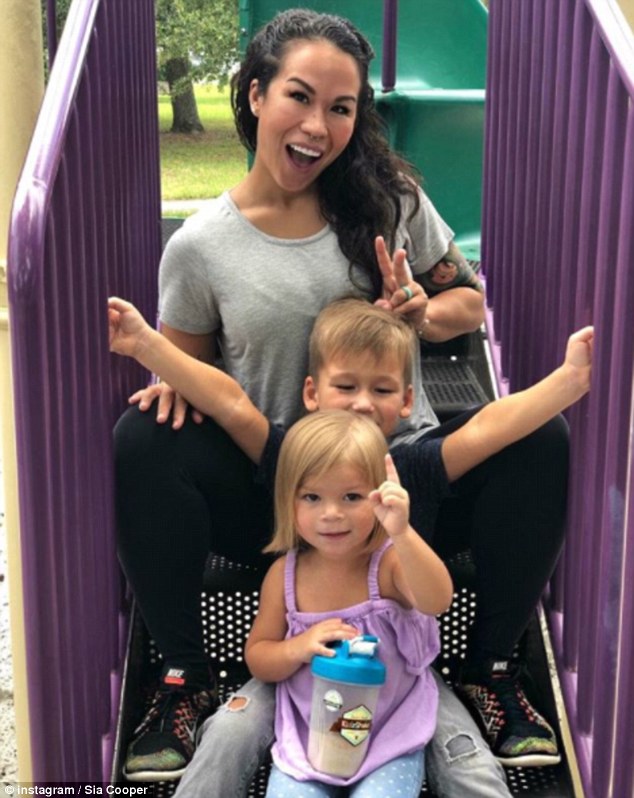 Since the surgery, Cooper (pictured with her children) said her rashes have cleared up, she’s lost weight and has more energy

Read More:  Menopausal Depression is Common, Who Is at Risk?

Cooper first visited her original surgeon, who told her there was little evidence to support BII and that her concerns were in her head.

‘He told me I would be disproportionate if he took them out,’ she said.

She decided to call Dr Jae Chun, a cosmetic surgeon in Newport Beach, California, who specializes in breast explants.

‘We made a phone consultation and from the moment he said hello, he answered all my questions,’ she said.

‘I’d forgotten what it was like to take deep breath because I no longer have this feeling of an elephant sitting on my chest,’ she said.

In September, the largest study of breast implant outcomes to date was released by the University of Texas MD Anderson Cancer Center in Houston.

Looking at FDA post-approval studies, the team found that silicone implants can increase a woman’s risk of arthritis, stillbirth and even skin cancer,

The authors noted that although certain risks were more common in women with silicone implants, ‘absolute rates of these adverse outcomes were low’.

‘Women should not consider breast implants if they have a history of autoimmune disease or connective tissue disease,’ Dr Diana Zuckerman, President of the National Center for Health Research, told DailyMail.com.

‘We believe that could be a cause behind why some women get sick after getting breast implants.’

Doctors in general believe that autoimmune diseases are generally underdiagnosed.

Cooper, who is now a 32C, said she wishes she’d asked more questions before her augmentation and encourages other women to do so before getting implants.

‘Be your own health advocate. If you feel something is wrong, it probably is,’ she said.